Dolchstoss Legende (Stab-in-the-back myth)
The Dolchstoß Legende is the notion, widely believed in right-wing circles in Germany after 1918, that the German Army did not lose World War I but was instead betrayed by politicians and civilians on the home front, especially the republicans who overthrew the monarchy. Advocates of this legend denounced the German government leaders who signed the Armistice on November 11, 1918, as the ‘November Criminals’ (Novemberverbrecher). When the Nazis came to power in 1933 they made the legend an integral part of their official history of the 1920s.They portrayed the Weimar Republic as the work of the ‘November criminals’ who used the stab in the back to seize power while betraying the nation. The Nazi propaganda depicted Weimar as ‘a morass of corruption, degeneracy, national humiliation, ruthless persecution of the honest ‘national opposition’. In 1919 Hindenburg testified for a Reichtags commission that the German Army had been on the verge of winning the war in the autumn of 1918 (the German troops were still fighting in foreign lands and even at the time of the armistice, no Allied force had crossed the German border). He claimed that the defeat had been precipitated by a Dolchstoß  by disloyal elements on the home front and by unpatriotic politicians. Despite being threatened with a contempt citation for refusing to respond to questions, Hindenburg simply walked out of the hearings after reading his statement. Hindenburg’s status as a war hero provided him with a political shield and he was never prosecuted.

In this painting by Albert Reich we see German troops, neither defeated nor injured, withdrawing to Köln. They are crossing the river Rhine via a military pontoon bridge (floating bridge). We see the Hohenzollernbrücke (this bridge is still in place), the huge Cologne Cathedral in the background and at the right the flag in black, white and red, the colours of the Deutsche Kaiserreich. The Weimar Republic changed the flag colours in 1921 to black, red and gold. The first thing the Nazis did in 1933 was reinstall the previous colours: black, white and red. And after WWII, very predictable, the colours were changed again into black, red and gold. 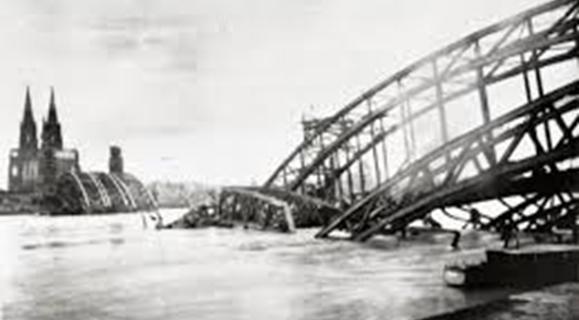 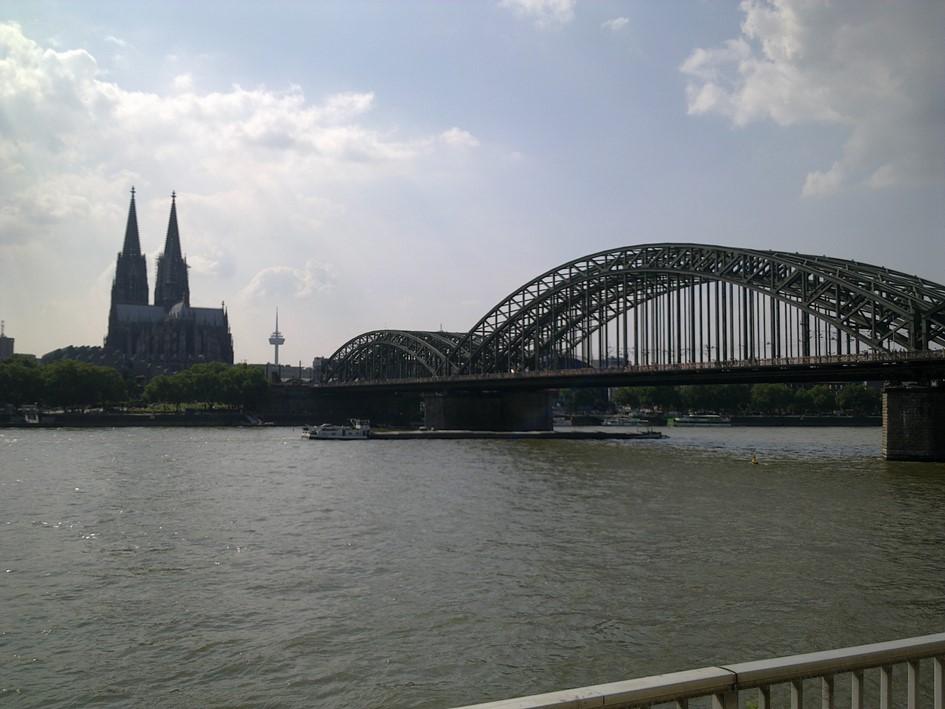 Dolchstoss Legende
This is an illustration from a 1919 Austrian postcard showing a caricatured Jew stabbing the German Army in the back with a dagger. The capitulation was blamed on the unpatriotic populace, the Socialists, Bolsheviks, the Weimar Republic, and especially the Jews (Wikipedia). 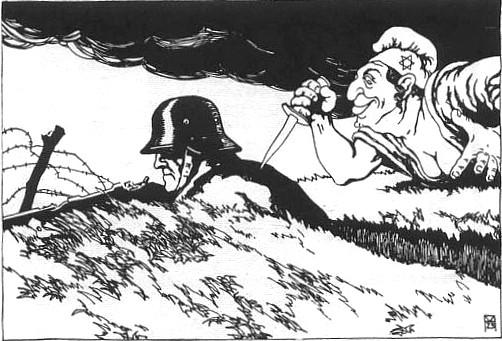 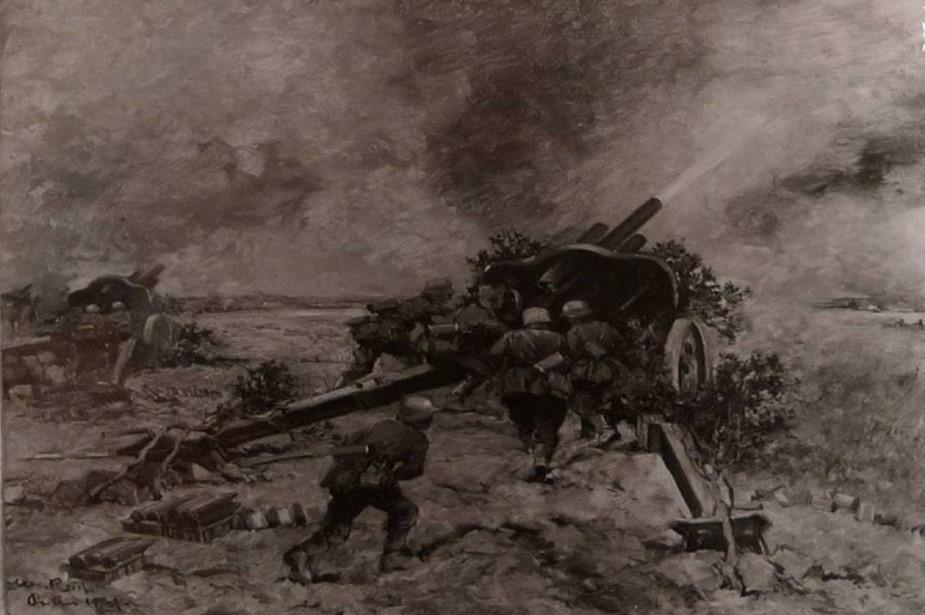 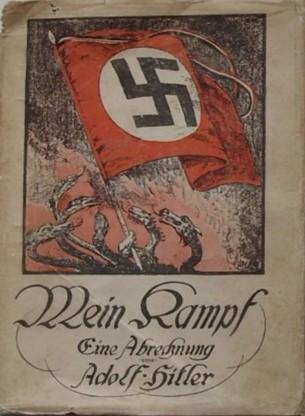 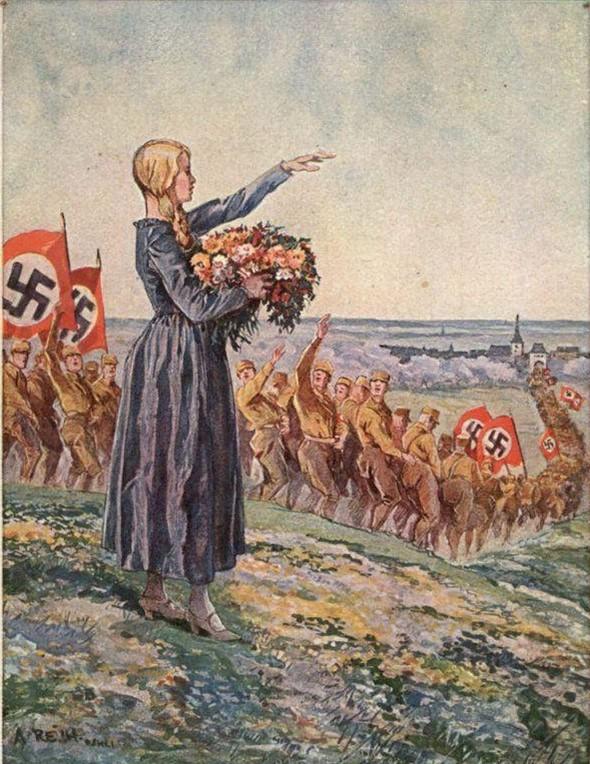 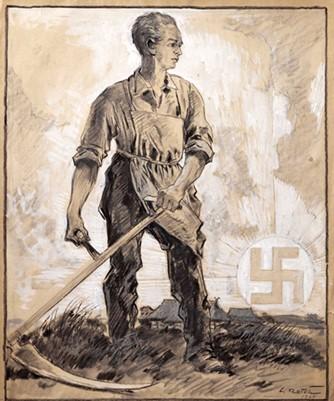 Left: Albert Reich, ‘Gott ist mit den stärksten Bataillonen’ (‘God is with the strongest batalions’). Postcard. date of creation unknown.
Right: Albert Reich’, ‘Auf Deutschlands höchstem Gipfel’ (‘At the top of the highest mountain in Germany’). Location must be the top of the Zugspitze (2.962 meter) in Southern Bavaria. Printed on a postcard, date of creation unknown. 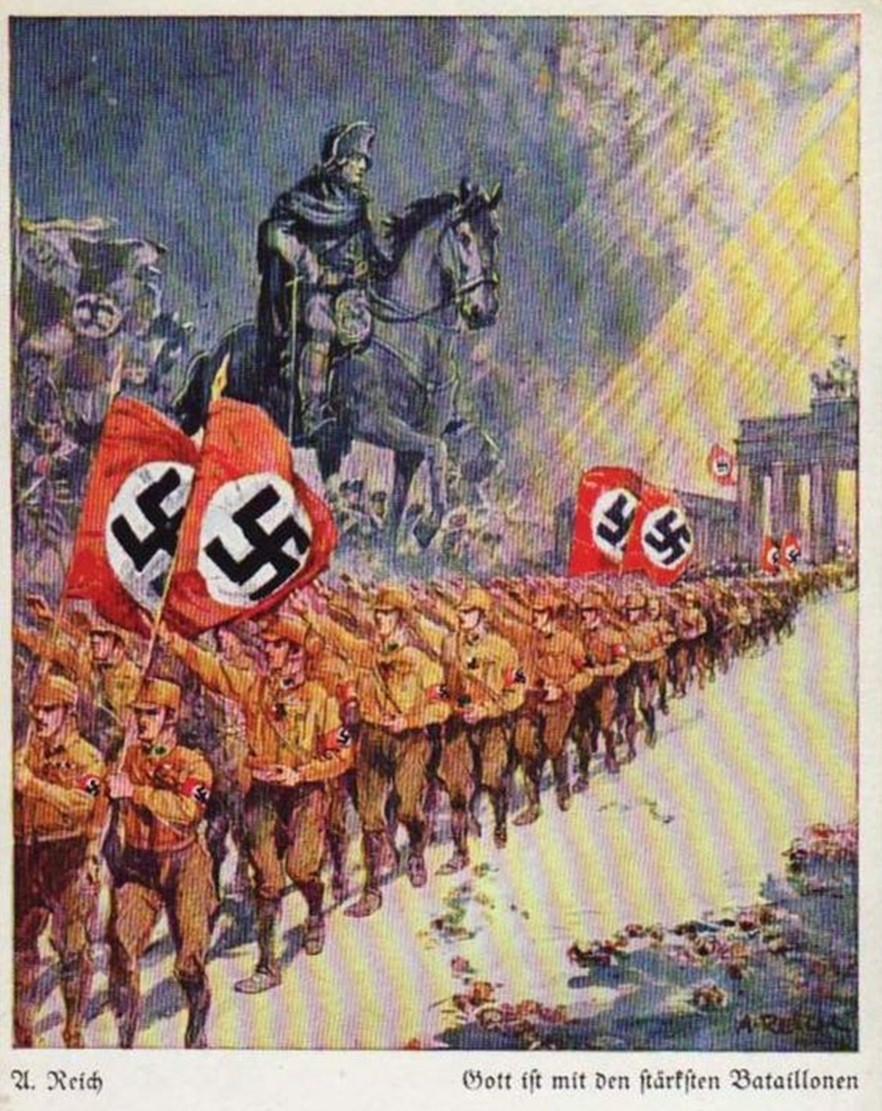 Albert Reich, ‘Das Isonzotal bei Tolmein’ (‘The Isonzo Valley near Tolmin’), 1918. Size 107 x 35 cm. The soldiers at the left and right belong to the German Alpenkorps. In the possession of the ‘Bayerisches Armeemuseum’. Displayed at the exhibition ‘Vu du Front, représenter la Grande Guerre’ in ‘Musée de l’armee’, Paris, 2014/15.
Albert Reich created several depictions of the ‘Isonzo-slaughterings’: the front in the mountains between Italy and Austria where more than 400,000 men lost their lives from 1915 to 1918. The Battles of the Isonzo were a series of 12 battles between the Austro-Hungarian and Italian armies in World War I mostly on the territory of present-day Slovenia, and the remainder in Italy along the Isonzo River on the eastern sector of the Italian Front. In 1917 Germany send the 14th Armee headed by General Otto von Below to help the Austro-Hungarians, The 14th Armee included the Deutsche Alpenkorps. 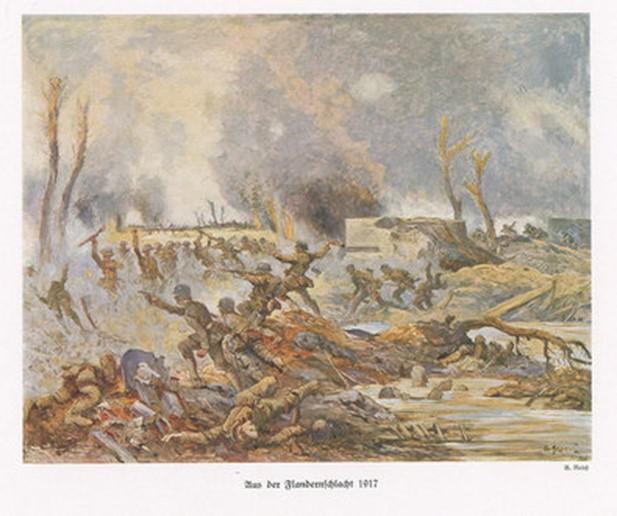 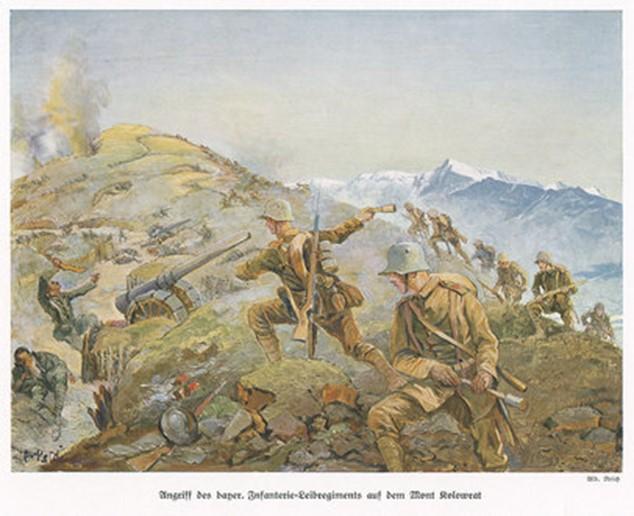 Albert Reich, ‘Artillerie geht an die Front’ (‘Artillery moving to the front’), GDK 1938 room 13. Bought by Hitler for 2.500 Reichsmark and placed in the Neue Reichszkanzlei (‘für die Inneneinrichtung des Erweiterungsbaues der Reichskanzlei’). The painting is on the 144-List, see below. 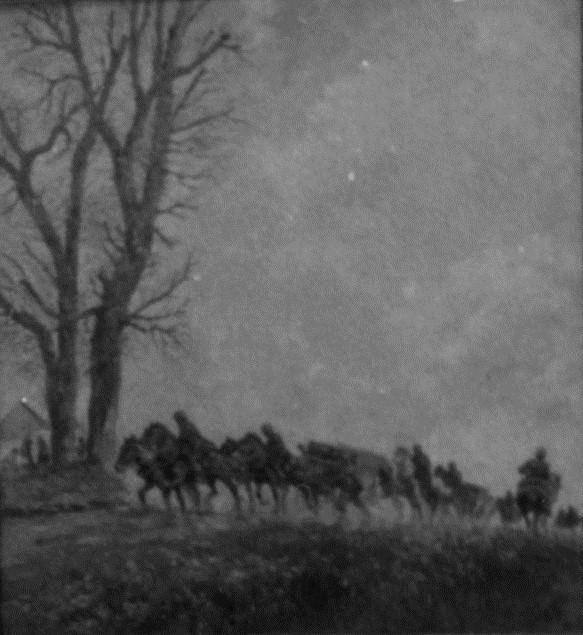 Albert Reich
Albert Reich (1881 -1942) born in Neumarkt, was the son of a shoe repairman. Until 1898 he attended the Arts and Crafts School in Nürnberg. In 1902 he went to the Royal Art Academy in Munich were his teachers were Johann Casper Herterich, Heinrich von Zügel and Peter von Halm. From 1907 (until his death) he worked as illustrator for the Kallmünzer magazine ‘Die Oberpfalz’. From 1911 till the outbreak of the war he was leading the Freilichtschule, earlier founded by Melchior Kern.
Reich accompanied the German Alpenkorps in World War I as war painter. Many of his paintings and drawings of the ordinary days of soldiers were also printed on postcards. He painted the ‘Isonzo-slaughterings’: the front in the mountains between Italy and Austria where more than 400,000 men lost their lives from 1915 to 1918. Other motifs in his work were ‘Das Alpenkorps in Tirol’, ‘Durch Serbien’, ‘Durch Siebenbürgen und Rumänien’, ‘Gegen Italien’, ‘Das Alpenkorps im Westen’, ‘durch Siebenbürgen und Rumänien’ and  ‘Unser deutsches Alpenkorps in Tirol’.
In 1920 he designed a war memorial -together with Theodor Strasser- for the Mariä Opferung church in Duggendorf; in 1922/23 he created a war memorial for the marketplace in Kallmünz.
Abert Reich was a convinced National Socialist and friend of Dietrich Eckart. Together with Eckart he designed covers for the first editions of Mein Kampf. In 1935 Reich founded in Harlachin, a district of Munich, a NSDAP-Ortsgruppe (local party group).
In the Second World War he worked as an illustrator of books and magazines produced by the SA. Albert Reich had 11 paintings in the Great German Art Exhibition: ‘Artillerie geht an die Front’, ‘Bayerische Artillerie in Flandern’, ‘Batterie in Polen’, ‘Dünkirche, versenkte Schiffe’, ‘Vormarsch des VII-Armeekorps’, etc. Three of them were bought by Adolf Hitler for prices of up to 3,000 Reichsmark.  ‘Artillerie geht an die Front’ (‘Artillery moving to the front’), GDK 1938 room 13, was placed in the Neue Reichszkanzlei (‘für die Inneneinrichtung des Erweiterungsbaues der Reichskanzlei’). The painting is on the 144-List.
Adolf Reich died on 12 April 1942 in Munich.
On recommendation of ‘Amt Rosenberg’, Hitler granted Albert Reich shortly after his death the professor title.