World War I was the first war in which posters, along with postcards and movies, played a dominant role in mass communication. It was not only a war with soldiers fighting at the front; the whole war economy had a big influence on the civil population. War bond posters used patriotic motifs and symbols like the black-yellow flag of the Kaiserreich and the double-eagle of the Habsburgers. The war, which was fought using all means including tanks, airplanes and poison gas, was depicted on posters as the setting of heroic fighting. Especially scenes with German knights fighting dragons were popular. For many painters and artists propaganda painting was the only way to be exempt from duty.
Hoffmann was famous for the several war bond posters he painted. Many of them depicted dragon fights. Some copies of Kriegsanliehes are displayed in museums (see under); however, those are prints (posters), not the original drawings of Anton Hoffmann.
This design for a war bond (Drachenkampf) from 1917 leaves to the audience’s imagination which snake was France, Britain, America, Russia, Canada, Belgium, Italy or Portugal. 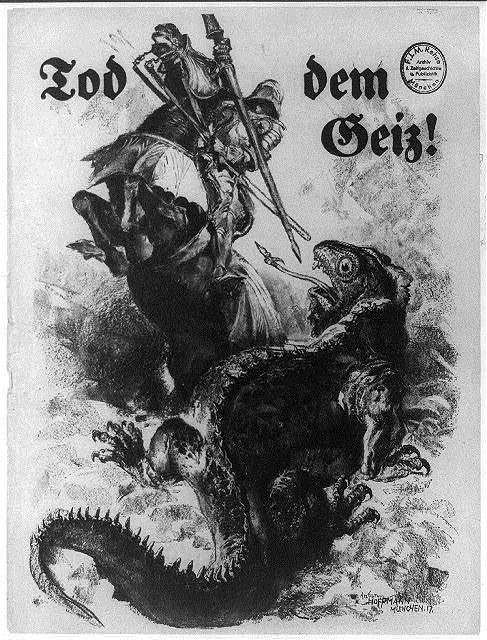 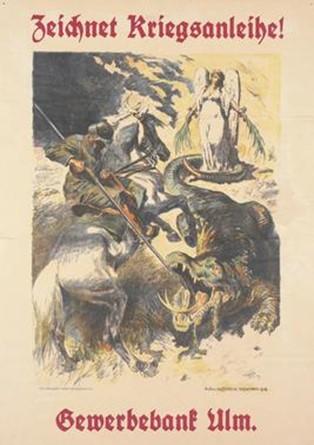 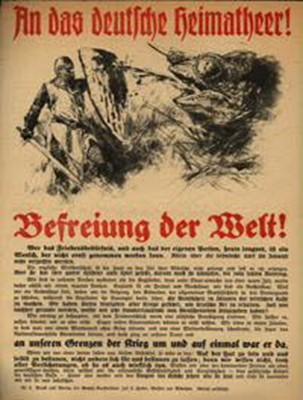 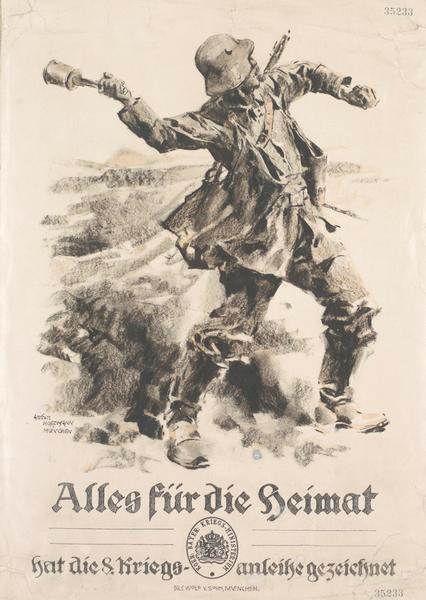 Anton Hoffmann, ‘Zeichnet Kriegsanleihe!’ (‘Subscribe to the Loan!’). Published 1918. The print is in the possession of the Imperial War Museum, London. 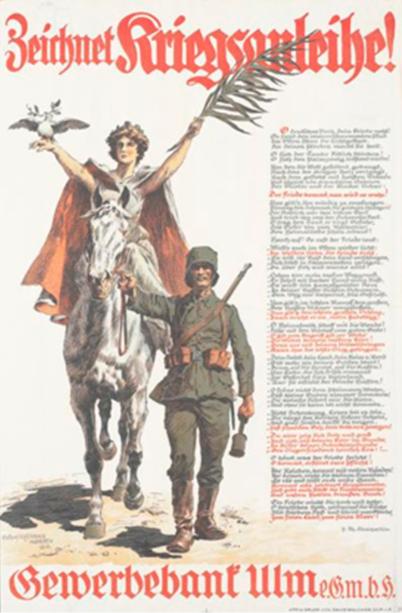 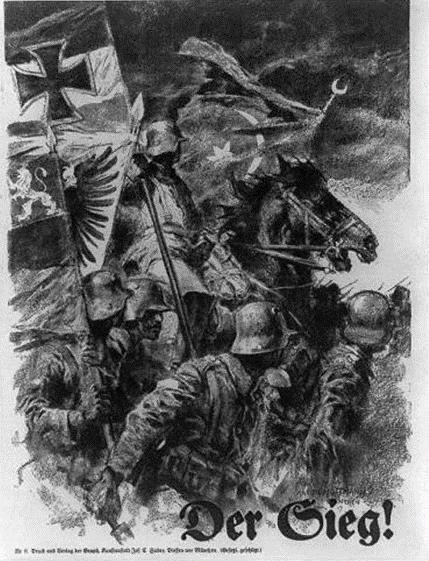 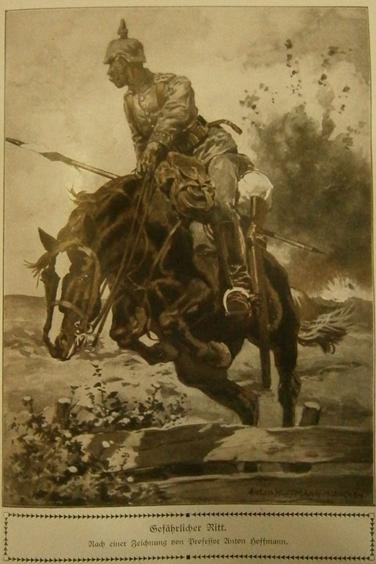 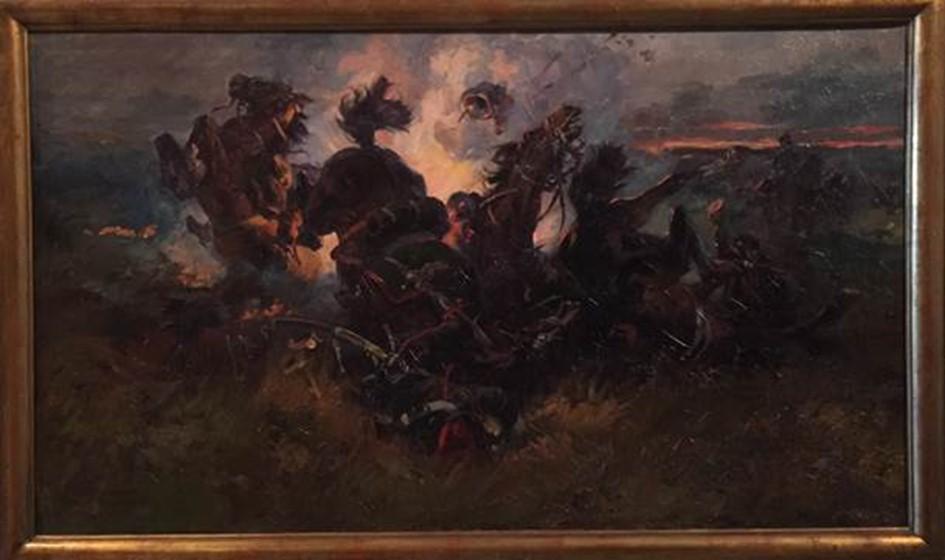 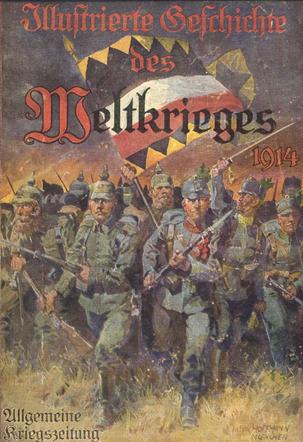 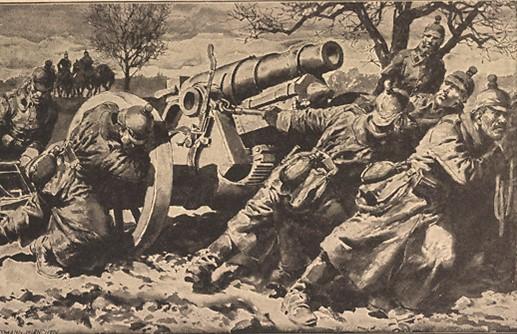 Left: Anton Hoffmann, ‘Furor Teutonicus’ (Teutonic Fury’). Furor Teutonicus (‘Teutonic Fury’) is a Latin phrase referring to the proverbial ferocity of the Teutones, or more generally the Germanic tribes of the Roman Empire period.  The original expression is generally attributed to the Roman poet Lucan. Lucan used the term to describe what he believed to be the outstanding characteristic of the Germanic tribe called the Teutones: a mad, merciless, berserk rage in battle. The Teutons met with the armies of the Roman republic in the eastern Alps around 113 BC. The Romans, under the command of the Consul Papirius Carbo, tried to lure the tribe into a trap, but they underestimated their military potential and lost the Battle of Noreia. The Romans also lost the Battle of Arausio (105 BC).
Right: Anton Hoffmann, ‘Männer!’ (‘Men!). Cover of ‘Ein Heldenbuch aus dem Grossen Krieg’ (‘A book about the Heroes of the Great War’), 1927. 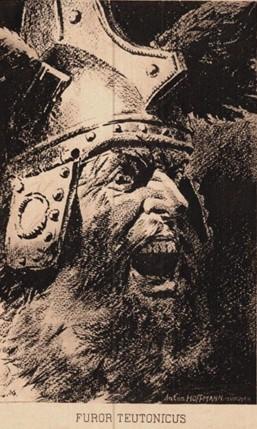 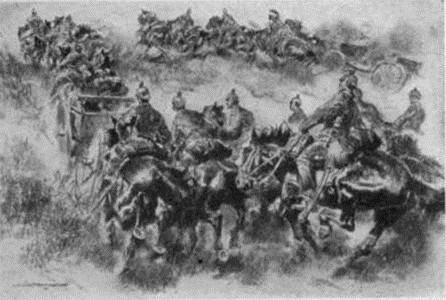 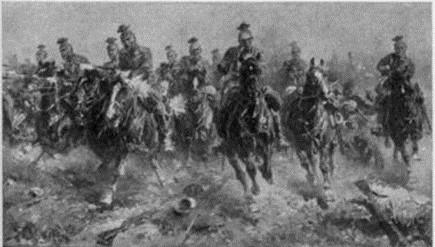 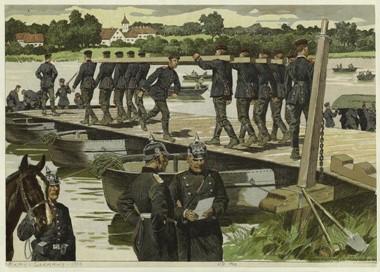 Anton Hoffmann
Anton Hoffmann (1863 – 1938) born in Bayreuth, was a painter, illustrator and university professor. After 9 years of service in the Bavarian army, Hoffmann went to the Art Academy in Munich where he became a student of Gabriel von Hackl and Wilhelm von Diez. Starting in 1896, his works were regularly exhibited in the Munich Glass Palace. In 1901 he was awarded the Ludwigs Medaille, Abteilung für Wissenschaft und Kunst. Two of his main subjects were history and military paintings, especially depictions of artillery, infantry and cavalry. He created, among others, several series dealing with the history of the Bavarian army’s uniform. In 1911 Hoffmann was granted the professor title by Prinzregent Luitpold von Bayern. During WWI Hoffmann designed various War Bond posters; several of these posters are in the possession of the Imperial War Museum in London. Some of these War Bond-drawings were depicted on the cover of books. In 1919, Hoffmann published in Diessen near Ammersee a richly pictorial adventure book called ‘The Conquest of Mexico’ that he had written and illustrated. The work had a significant influence and popularity in its day. As a member of the South-German Illustrators’ Association, Hoffmann also illustrated several series of schoolbooks, youth magazines and history books. Even today, Hoffmann’s works can be found and collected on historical postcards.
Anton Hoffmann died in 1938 in Rothenburg ob der Tauber.
In 2017 the Militärhistorische Museum der Bundeswehr in Dresden displayed Hoffmanns work ‘Im Granatfeuer, Französiches Artillerygespann unter Beschoss’ (‘under shellfire, French artillery team under fire’), 1914.