The tekst reads: ‘In Trinitate Robur’: ‘My Strenghts in the Trinity’ (‘In der Dreiheit liegt die Kraft’). Otto von Bismarck himselve said in 1877 it stood for the Trefoil, Clover and Oakleave, the old device of his familiy; at the same time the motto, according to old traditional rules, had a double meaning, and reffered to the Trinity of God.

Coat of Arms of the House of Bismarck, published in ‘Wappenbuch des Westfälischen Adels’, Görlitz 1901/03. 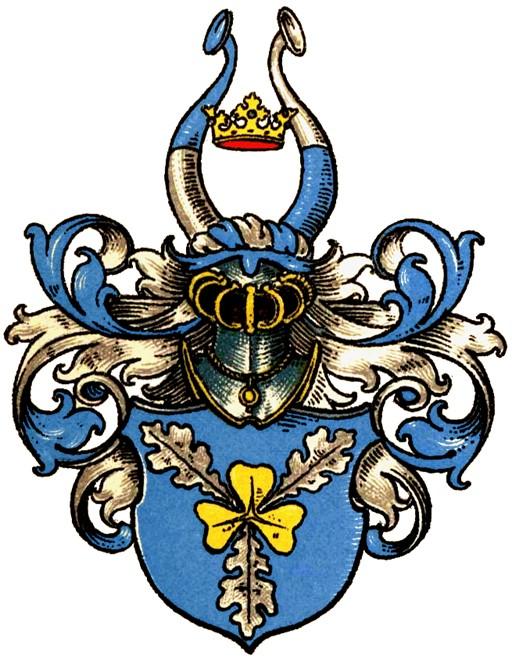 A similar shield: the iron base plate has an identical form and size. Cast by Carlshütte Delligsen (inscribed). 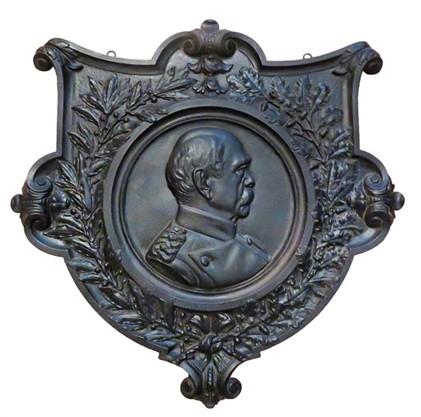 ‘The Iron Century’
Cast Iron in Germany: the cultural-historical significance of iron casting during the 19th century.
Bronze is the most popular metal for cast metal sculptures; a cast bronze sculpture is often called simply ‘a bronze’. Artists were working with bronze even in ancient times, such as in the Greek and Roman civilizations. The first known bronze statue is likely ‘Dancing Girl’ from Mohenjodaro (Pakistan), belonging to the Harappan civilization and dating back to c. 2500 BC. However, the Greeks were the first to scale the figures up to life size: an example that is still in existence is ‘Victorious Youth’, a life-size bronze made between 300 and 100 BC.
Casting iron sculptures is a technically different and more complicated process. Cast iron had been occasionally used in Europe in basic architectural embellishment in the Middle Ages, such as fire backs with cast figures and scenes. It was not until 1784 that the German foundry Lauchhammer, with the assistance of sculptors Joseph Mattersberger and Thaddäus Ignatius Wiskotschill, for the first time in Europe, successfully cast a life-size hollow sculpture in iron. The use of cast iron for sculpting in Prussia developed rapidly under the reign of King Friedrich Wilhelm III; from 1797 to 1840 the Berlin art scene operated on a high level, and several Berlin artists preferred iron for their works. Cast iron was more affordable than bronze, and in the 19th century, ‘The Iron Century’, a large number of high-quality sculptures -often with monumental dimensions – were produced. During the German ‘Freiheitskriege’ (Battles against Napoleon from 1813- 1815), the social valuation of cast iron had already increased. For example, there were successful war financing campaigns like Eisen statt Gold and the creation of the Eiserne Kreuz. The cultural-historical significance of iron casting during the 19th century was further catalyzed by Friedrich Wilhelm III, who had his palace decorated with cast iron art, produced in Prussia. Black-coated iron became an aesthetical mark in Klassizismus. Meanwhile, the popularity of cast iron sculpting was not limited to Germany. The first Crystal Place Exhibition in 1851 in London prominently showed a series of life-size iron sculptures, as did the Exposition Universelle of 1855 held on the Champs-Élysées in Paris. It is notable that many sculptures and other iron art works in that time period were not signed by the artist or by the foundry.
The glory days of cast iron sculpting ended around the third part of the 19th century. The famous Königlich Preußische Eisengießerei (founded in 1796) closed its doors in 1874. The prominent Saynerhütte (founded in 1769) was sold to Firma Krupp in 1865, and it ceased the production of iron sculptures. Paradoxically, Foundry Lauchhammer (founded in 1725), which created the first cast iron life-size sculpture in Europe, is still in existence. A short renaissance in iron sculpting took place in the 1920s.

Foundry Carlshütte, Delligsen – 250 years of iron casting
The Friedrich-Carls-Hütte in Delligsen, a blast-furnace ironworks company, was founded in 1735. In 1872 its name was changed to Eisenwerke Carlshütte AG. From 1845 to 1895 Carlshütte had an artistic atelier attached, with designers like Ludwig Hage, Hermann Keck, August Koch and the (last) master designer, August Lehmensiek (1825-1895). In 1895 the production of artwork (such as iron-reliefs, memorial tables, and iron-decoration for bridges, lamp posts, fences and heaters) stopped and the company focused itself mainly on engine parts and industrial mass production. After several mergers and takeovers, Carlshütte had 1,200 employees in 1944. In 1984 the Friedrich Carl Hütte GmbH Stahlgiesserei finally went bankrupt. 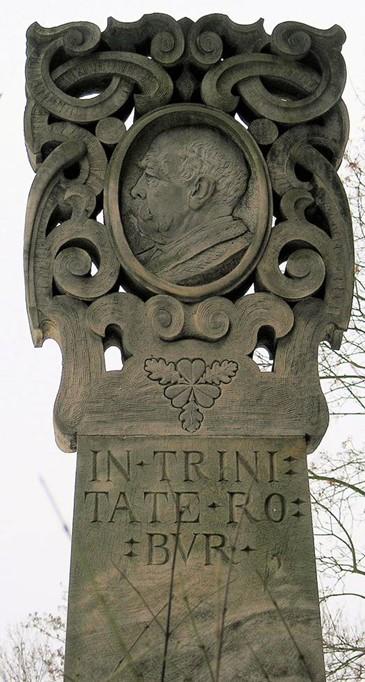 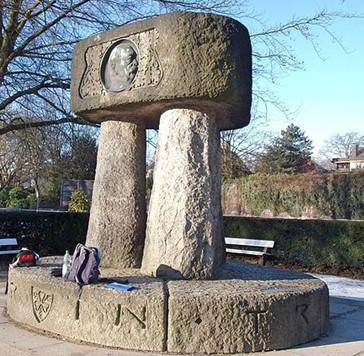 Bismarckturm, 1901, located in the city of Viersen.
With text at the door: ‘In Trinitate Robur’. 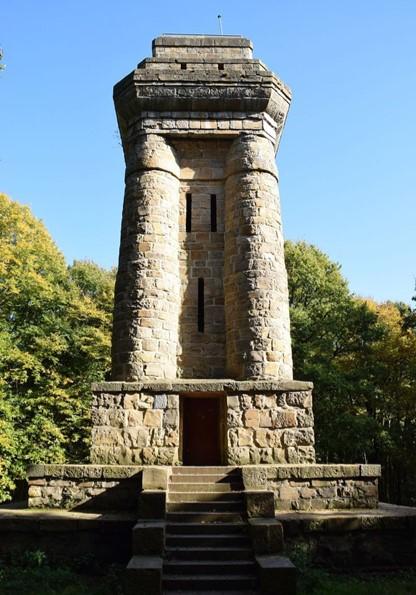 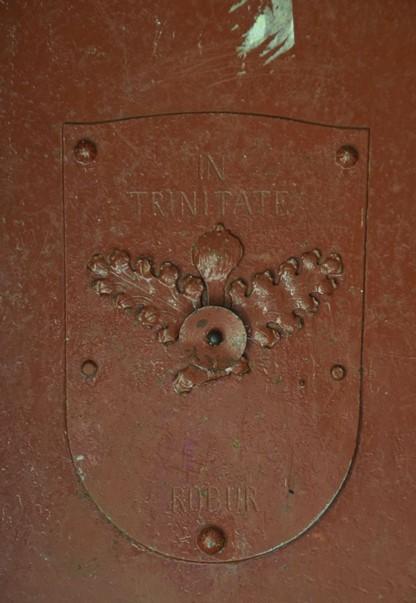 Bismarck Memorial (with identical iron base plate), located in the Hindenburgstrasse in Hahnenklee, a borough of the city of Goslar (Lower Saxony). This Bismarck Memorial was revealed in 1907 on the occasion of the 25th anniversary of Hahnenklee. This Bismarck-shield bears the text: ‘Wir Deutschen fürchten Gott, Sonnst nichts in der Welt’. The oak tree was planted in 1895 to honor Bismarck. 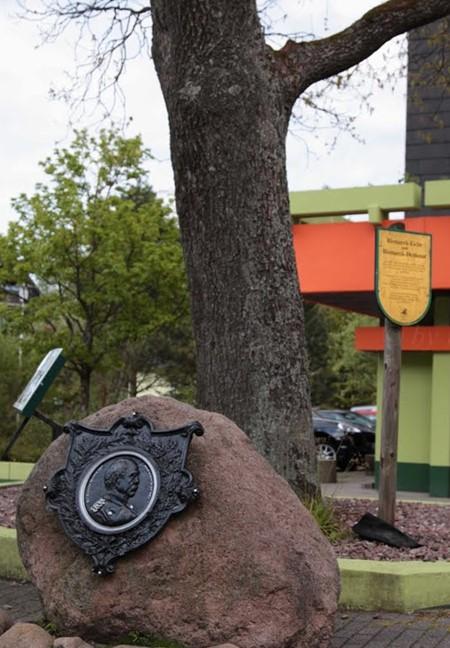 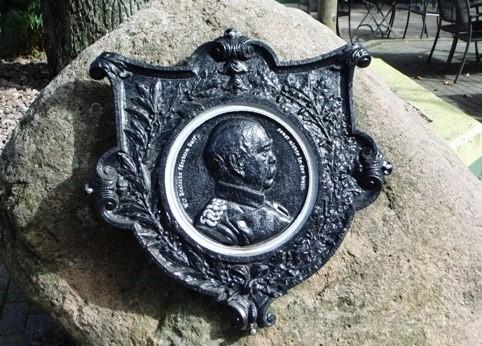 The Bismarck Memorial in Hahnenklee depicted on a postcard (somewhere in the first decades of the 20th century). Notice the young Bismarck-oak-tree next to the monument. 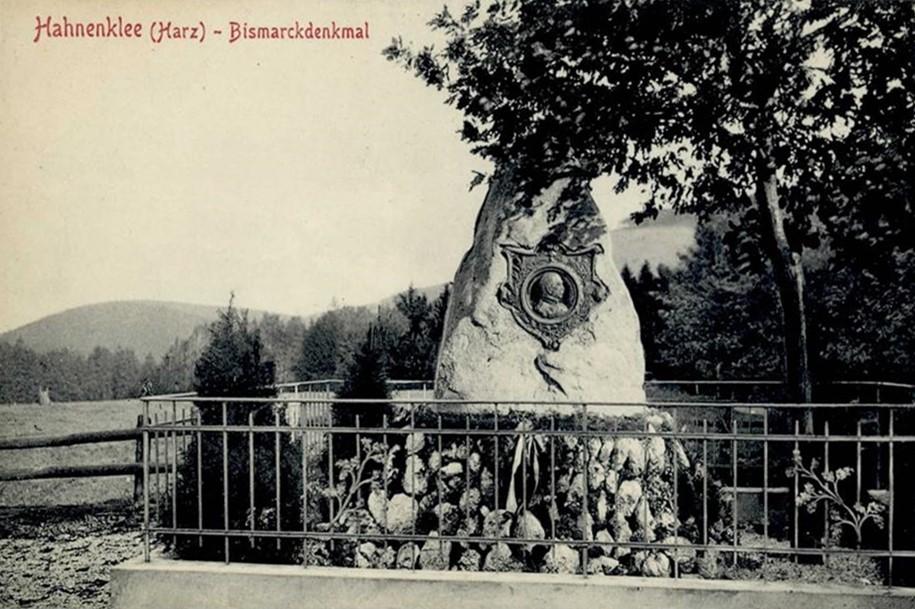 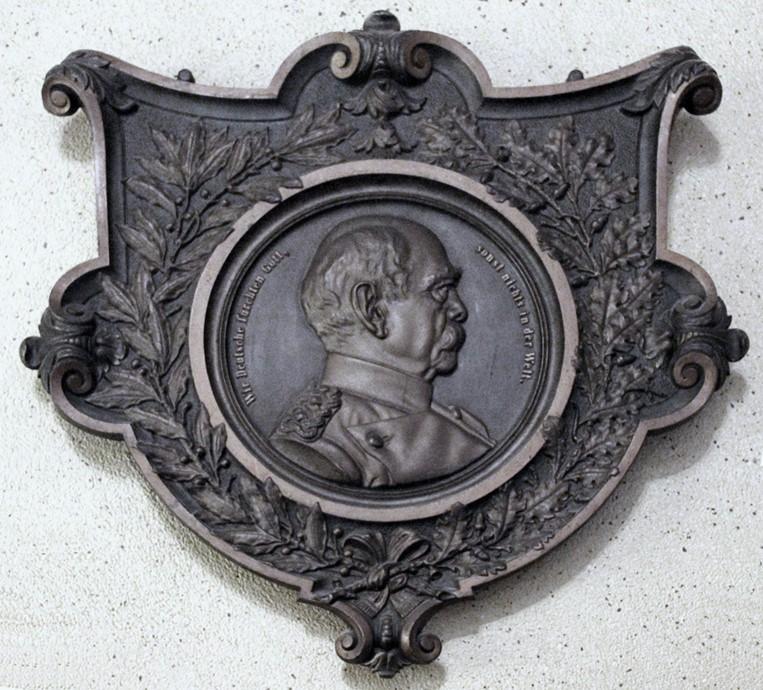 Another identiacal cast located in the village of Jever, Am Kirchplatz. Oak and relief were installed in 1896. The iron cast is an after cast, modelled in 2013 after an original cast in the possession of the ‘Getreuen- und Bismarckmuseum’ in Jever  (photos: statues.vanderkrogt.net). 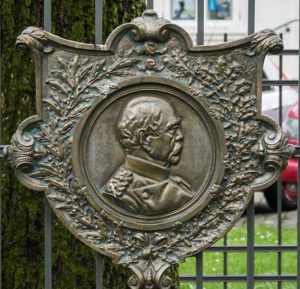 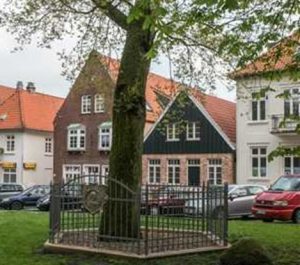 Foundry Carlshütte, Delligsen – 250 years of iron casting
The Friedrich-Carls-Hütte in Delligsen, a blast-furnace ironworks company, was founded in 1735. In 1872 its name was changed to Eisenwerke Carlshütte AG. From 1845 to 1895 Carlshütte had an artistic atelier attached, with designers like Ludwig Hage, Hermann Keck, August Koch and the last master designer, August Lehmensiek (1825%-1895). In 1895 the production of artwork (such as iron-reliefs, memorial tables, and iron-decoration for bridges, lamp posts, fences and heaters) stopped and the company focused itself mainly on engine parts and industrial mass production. After several mergers and takeovers, Carlshütte had 1,200 employees in 1944. In 1984 the Friedrich Carl Hütte GmbH Stahlgiesserei finally went bankrupt.

‘We Germans fear God and nothing else in the world’
(‘Wir Deutsche fürchten Gott, sonst nichts in der Welt’)
Otto van Bismarck (1815 – 1898) was the main designer of the German Kaiser Reich which was founded in 1871 and ended in 1918. He is known as one of the greatest statesmen of the 19th century. He was Minister President of Preußen and from 1871 to 1890 Reichskanzler (Minister President) of the German Kaiser Reich. Bismarck won three wars against Denmark, France and Austria.
The text ‘Wir Deutsche fürchten Gott, aber sonsst Nichts in der Welt’, meaning ‘We Germans fear God and nothing else in the world’, comes from the speech of ‘Der Eiserne Kanzler’ (‘The Iron Chanceler’) which was given in the Reichtag on 6 February 1888. However, in the same speech Bismarck also stressed the importance of peace and the danger of conflicts: ‘Und die Gottesfurcht ist es schon, die uns den Frieden lieben und pflegen lässt’ (‘and already that godliness is it, which let us love and foster peace’).
Another famous statement of Bismarck was: ‘Not by speeches and votes of the majority, are the great questions of the time decided, but by iron and blood’ (‘Nicht durch Reden und Majoritätsbeschlüsse werden die großen Fragen der Zeit entschieden, sondern durch Eisen und Blut’ 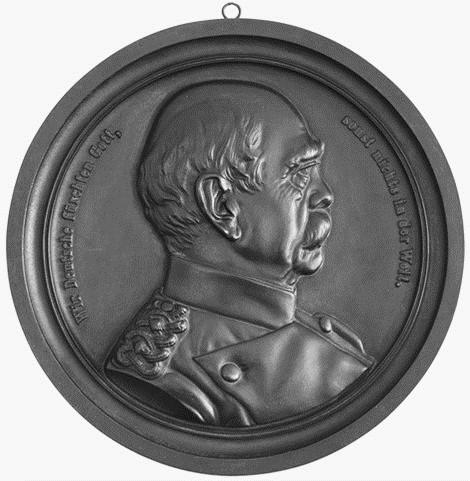 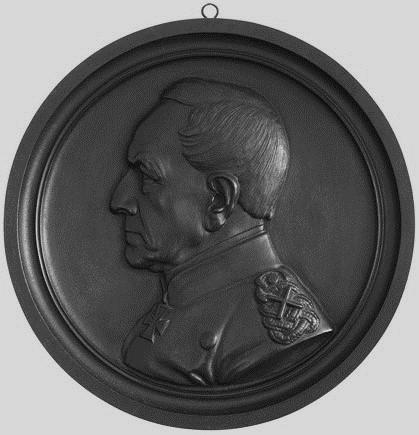 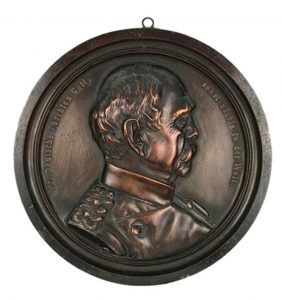 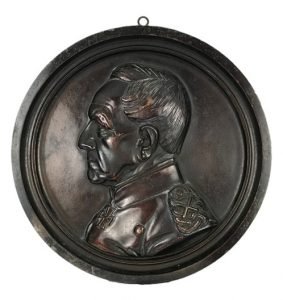 Left: signature of August Lehmensiek on the Bismarck relief.
Right: backsite of the Moltke relief. 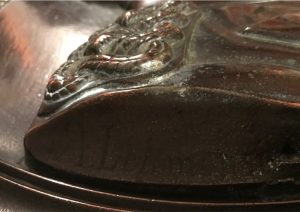 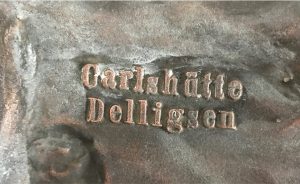 After August Lehmensiek. Bismarck-relief on the medieval Bismarckbrücke in Dresden-Löbtau (in 1902 named Bismarck Bridge, also named Weißeritzbrücke or Chausseebrücke). In 1916 a Bismarck Bust was placed on the bridge, which disappeared in 1945. In 1998 a new Bismarck relief, created by the foundry ‘Kunstgiesserei Lauchhammer’ replaced the bust. Just like the relief created in 2008 by Kunstgiesserei Lauchhammer (below), this relief is a copy of the Lehmensiek design. Foto 2014. 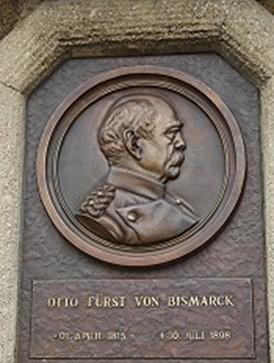 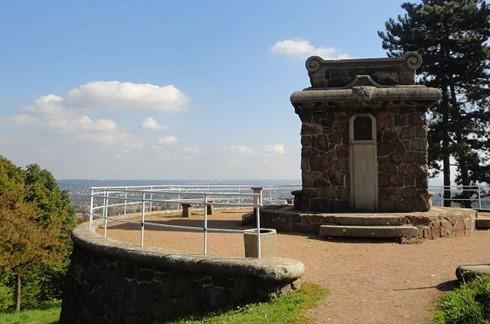 ‘We Germans fear God and nothing else in the world’
The Bismarck Tower at the Scheersberg, near the village Steinbergkirche (Schleswig-Holstein): ‘Wir Deutschen fürchten Gott, sonnst nichts in der Welt‘. 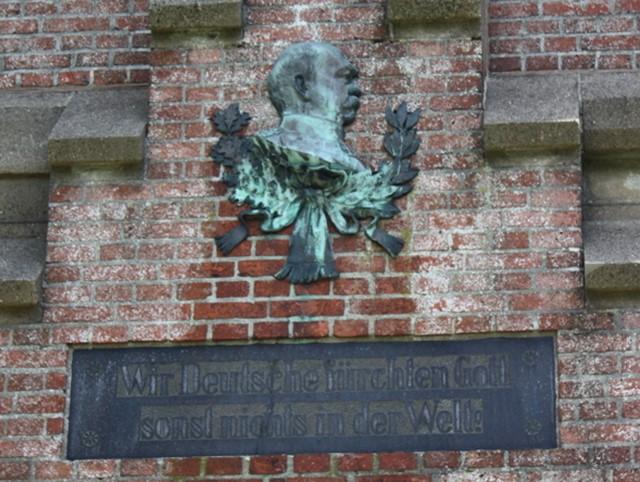 ‘We Germans fear God and nothing else in the world’
Engraved in a rock of ‘Cinq Pilliers‘, a rock formation north of Dreslincourt (France): ‘Wir Deutschen fürchten Gott, sonnst nichts in der Welt‘. 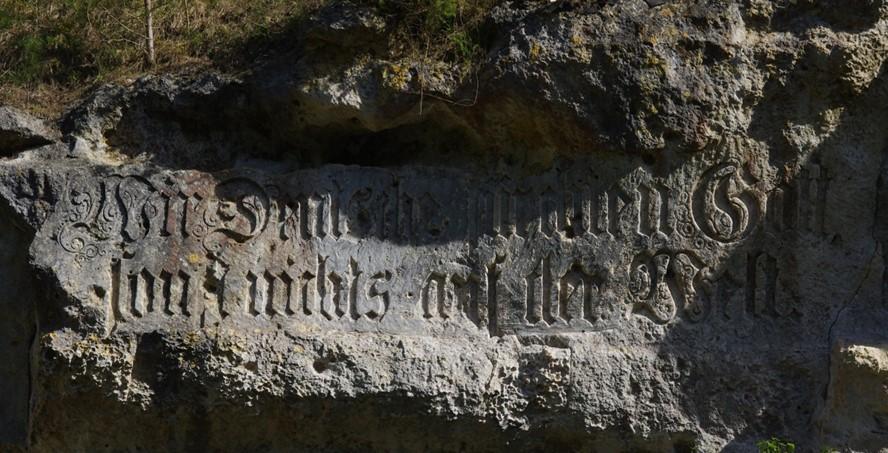 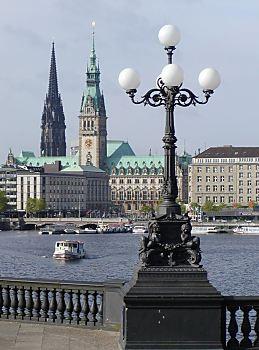 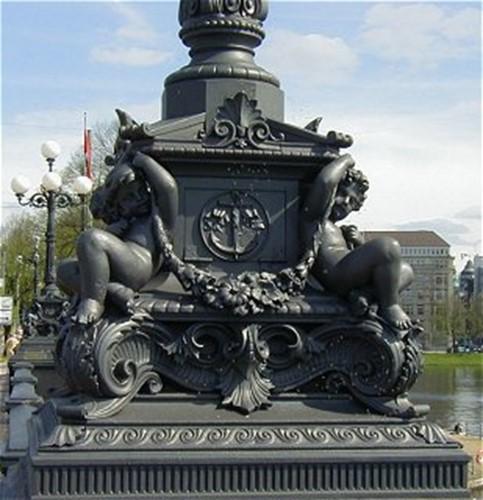 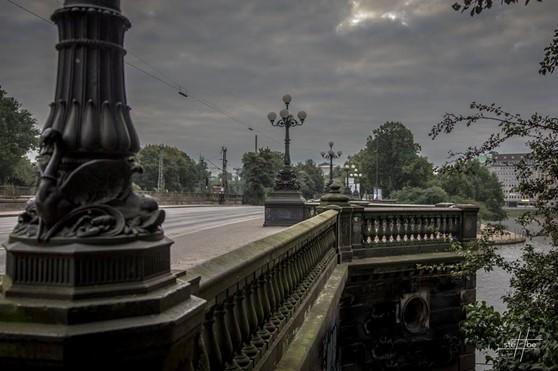 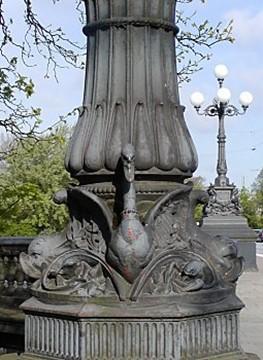 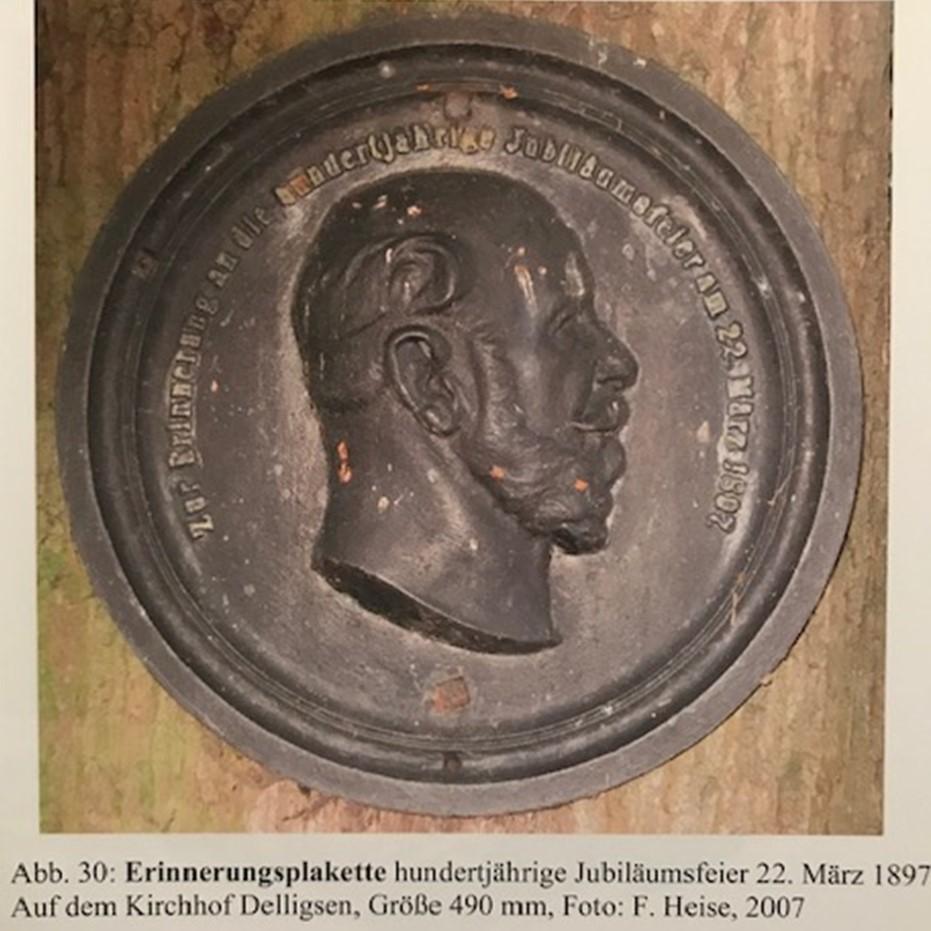 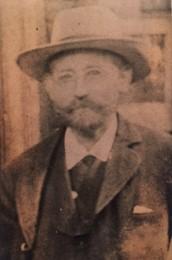