In creating this sculpture, Ernst Reiss Schmidt was probably inspired by Michelangelo’s ‘Pietà’. This Renaissance sculpture from 1499 is housed in St. Peter’s Basilica, Vatican City.

Left: Ernst Reiss-Schmidt, ‘Adagio’, 1944. Original photo of ‘Adagio’ (model in clay) in the atelier of the artist in Düsseldorf. A stamp on the back of the photo reads: ‘ERNST REISS-SCHMIDT, Industrie-Architect, Düsseldorf-Obk, Quirinstr. 36, Telefon 51003’.
Right: The text under the foto: ‘ADAGIO, Lebensgross (life size), Untersberger Marmor, H=60 cm’. 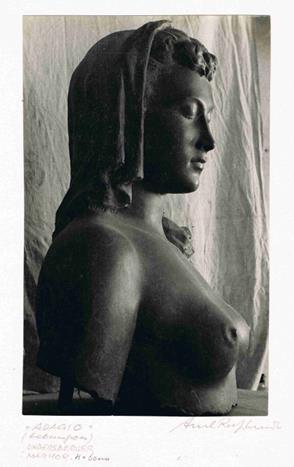 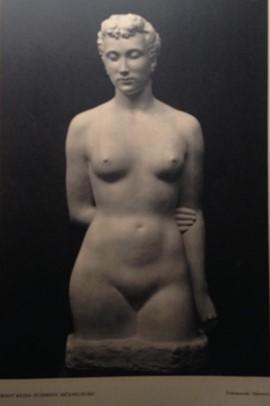 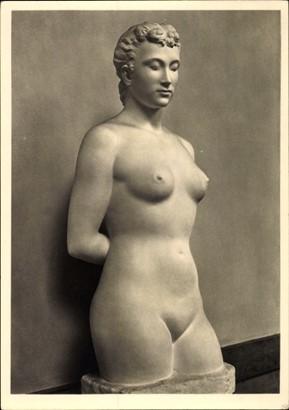 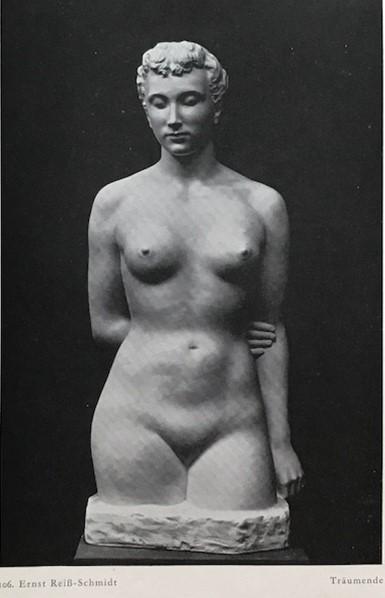 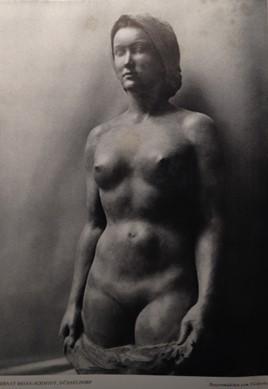 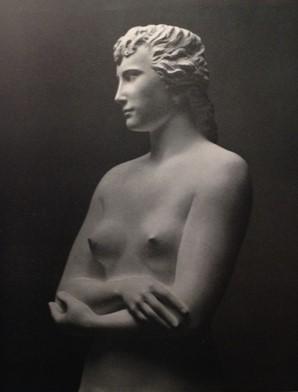 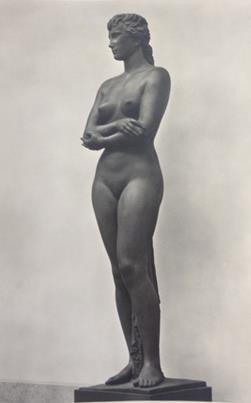 Ernst Reiss-Schmidt, ‘Albert Leo Schlageter‘. In the possession of the ‘Stadtmuseum Landeshauptstadt Düsseldorf‘.
Albert Leo Schlageter (12 August 1894 – 26 May 1923) was a member of the German Freikorps. His activities sabotaging French occupying troops after World War I led to his arrest and eventual execution by French forces. His death created an image of martyrdom around him, which was cultivated by German nationalist groups, in particular the Nazi Party. During the Third Reich, he was widely commemorated as a national hero. 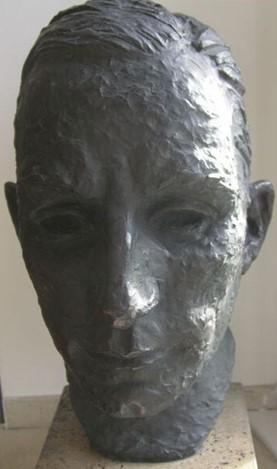 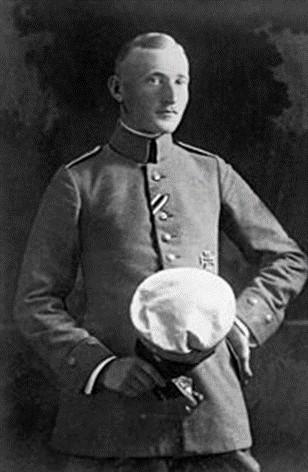 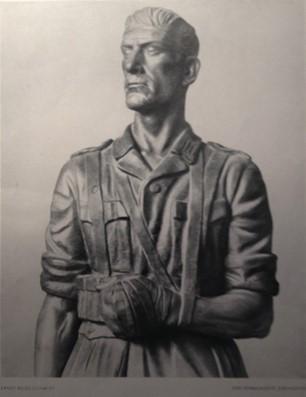 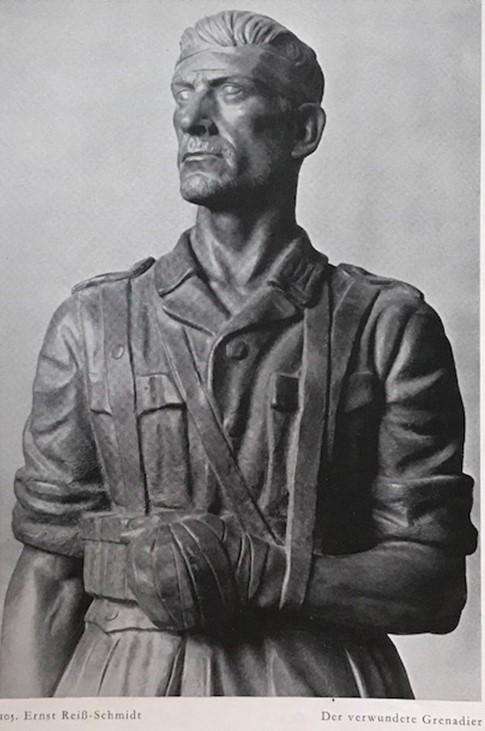 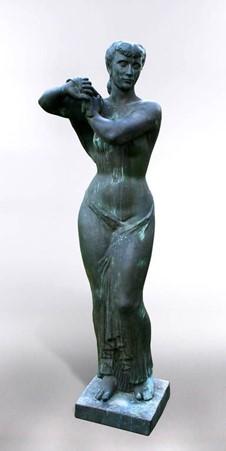 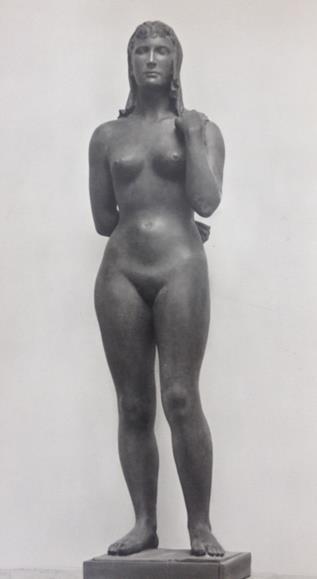 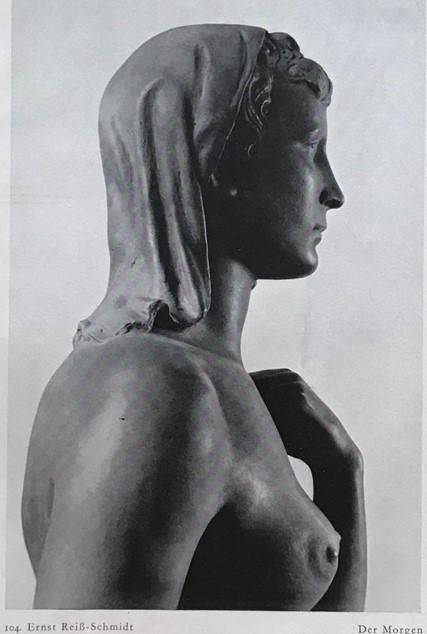 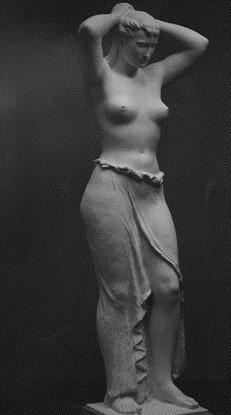 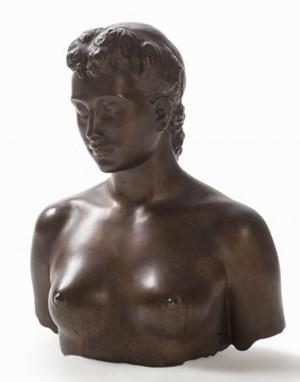 Ernst Reiss-Schmidt, ‘Mädchen mit Tuch’ (‘Girl with Cloth’). Plaster. Displayed at the exhibition ‘Kunst der Ruhrmark’ in the Mauritshaus, The Hague, 1942. Depicted in the exhibition catalog. 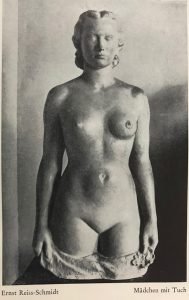 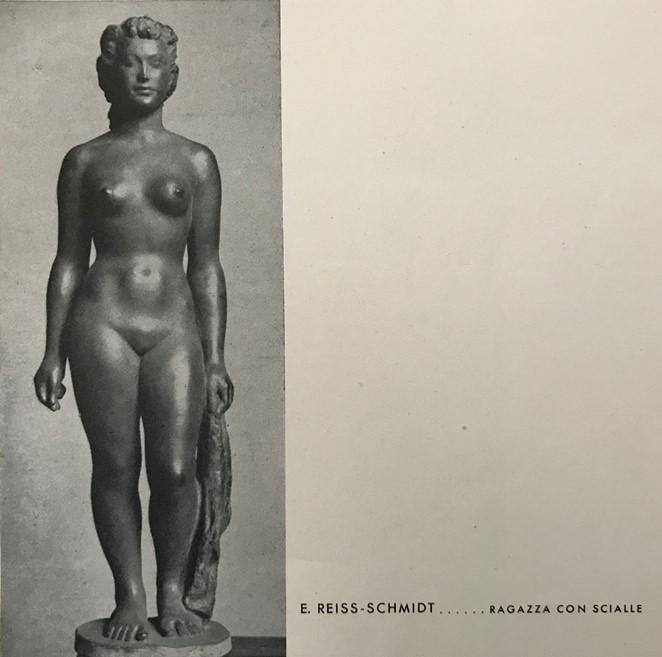 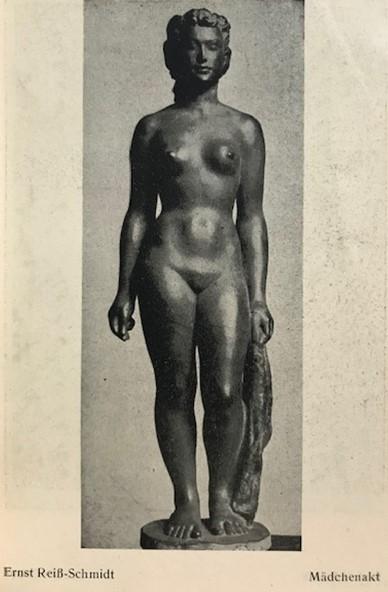 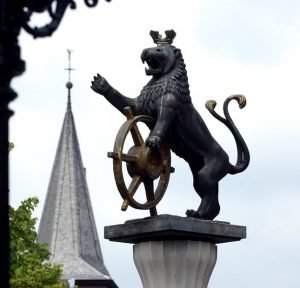 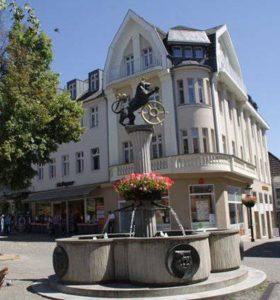 In 1950 Reiss-Schmidt (industry-architect) patented a design for a ski-bike, later to become the ‘Gfaellerei’. His design was published in many foreign newspapers, especially in the USA. Below an article in a French newspaper of 1954, starting with ‘Bavarian architect and sculptor Ernst Reiss-Schmidt, inventor of…’.

Ernst Reiss-Schmidt
Ernst Reiss-Schmidt was born in 1902 in Düsseldorf. He studied at the Düsseldorfer Academy of Fine Arts under H. Metzer (Meisterschüler) and R. O. Langer. Reiss-Schmidt, sculptor and industry-achitect, lived and worked most of his live in Düsseldorf. In 1928 Reiss-Schmidt participated at the exhibition ‘Deutsche Kunst’ in the Kunstpalast Düsseldorf.
Reiss-Schmidt was represented in the Great German Art Exhibitions with 13 works. Hitler bought his work ‘Traumende’ for 13,500 RM and ‘Olympia‘ for 20,500 RM. Both sculptures are now in the possession of the Deutsches Historisches Museum, Berlin. In 1944 Martin Bormann bought Reiss-Schmidt’s GDK-work ‘Sinnen’. His other well-known GDK works, depicted in several art magazines and on postcards, include ‘Der Morgen‘, ‘Der verwundete Grenadier‘, ‘Bauernmadchen vom Niederrhein’ and ‘Olympia’.
Reiss-Schmidt was also represented at the exhibitions ‘Herbstausstellung Düsseldorfer Künstler’, 1940 and 1941, in the Kunsthalle Düssseldorf; at the ‘Rheinische Kunstausstellung’, Danzig, 1941; in 1941 at the exhibition ‘Westfaalsch-Nederrijnsche Kunst’, Rijksmuseum, Amsterdam (figure of a Farmer in plaster); in 1942 at the exhibition ‘Kunst der Ruhrmark’ in the Mauritshaus, The Hague; at the ‘Grosse Berliner Kunstausttellung’ 1942, Nationalgalerie; at the ‘Esposizione d’Arte Contemporanea di Duesseldorf’, 1943, in Florence and at the ‘Gau Ausstellung Westafalen-Süd, VII Grosse Sauerländiche Ausstellung’, 1944, Hagen. In 1941 Schmidt-Reiss was commissioned by the city of Ratingen, to create a large bronze lion (with wheel), identical the the Coat of Arms of the city. The lion was placed on top of the fountain at the Marktplatz in Ratingen, and is still existing.
In 1950 Reiss-Schmidt (industry-architect) patented a design for a ski-bike, later to become the ‘Gfaellerei’. His design was published in many foreign newspapers, especially in the USA.
Ernst Reiss-Schmidt died in 1987.
Nowadays in the possession of the Deutsches Historisches Museum are two works by Reiss-Schmitz: ‘Olympia’ (GDK 1944 room15) and ‘Träumende’ (‘Dreamer’, GDK 1943 room 7). The Bayerische Staatsgemäldesammlungen is in the possession of: ‘Stehende Frau’, Stehender weiblicher Akt’ and ‘Schwebende Jungfrau Olympia’. ‘Träumende’ was displayed at the exhibition ‘Kunst im 3. Reich, Dokumente der Unterwerfung’. The exhibition, instigated by the Frankfurter Kunstverein, was held from 1974 to 1975 in Frankfurt, Hamburg, Stuttgart, Ludwigshafen and Wuppertal.