Extremely well-executed original oleograph of Adolf Hitler;
done by Franz Triebsch, one of Hitler’s Court Painters.
This large oleograph, also known as a chromolithograph or Ölfarbendrück, can only be distinguished from an original painting by using a microscope. Unlike an ordinary poster, an oleograph is not a simple reproduction of the original but an adapted reproduction that aims to look like an original painting. The offset process is done with oils. By means of steal stamps a realistic relief is created in the paper and the original brushstrokes are imitated. Here also the canvas structure is partially copied. A thick layer of varnish protects the image and at the same time strengthens the impression of an original painting. The paper on which this oleograph is created is stretched over a (inner) wooden frame. The original image is quite likely enriched with some hand-made brush strokes that were planned in advance under supervision of Franz Triebsch in order to increase the realistic effect. The (outer) frame, measuring 98 cm x 77 cm, is also original from 1941. With the naked eye one sees a painting. Only a microscope (min. 15x) reveals that it is actually an oleograph.

This oleograph of Adolf Hitler is made after Triebsch painting which hung in the Great German Art Exhibition in 1941, room 14 (see below). It hung in an official building of the Wehrmacht in Northern Germany until 1945. Since the war it has been privately owned.
Two paintings of Franz Triebsch, one of them depicting Hitler, are still in the possession of the U.S. Army Center of Military History in Washington, D.C. We have not seen any other surviving painting from Triebsch depicting Hitler; it is very likely they have all been destroyed. Also from these oleographs, with their fragile structure of stretched paper, we have not seen any in the last decades.

Franz Triebsch, ‘Bildnis des Führers’ (‘Portrait of the Leader’), art print respectively postcard*. GDK 1941, room 14; depicted in the exhibition catalogue.
Left: depicted on the cover of ‘Kunst dem Volk’, August 1941.
Right: ‘Bildnis des Führers’ in room 14 of the GDK 1941; at the right ‘Bogenschütze’ by Adolf Abel, at the left ‘Faustkämpfer’ by Emil Cauer. 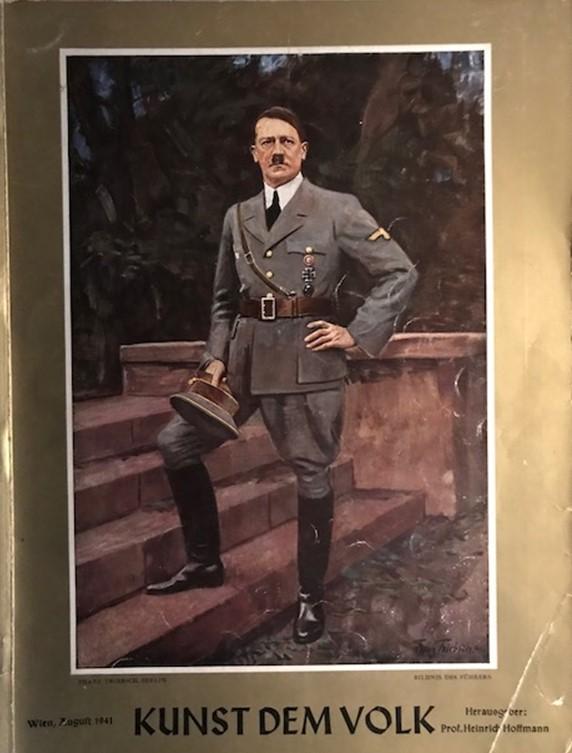 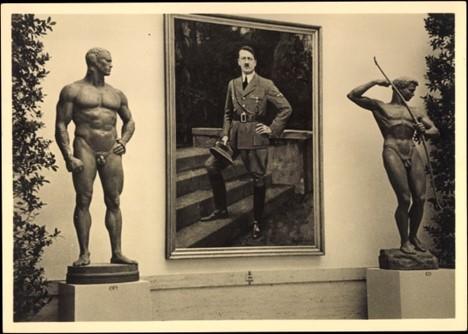 Franz Triebsch, ‘Bildnis des Führers’ (‘Portrait of the Leader’), art print. GDK 1939, room 23; depicted in the exhibition catalogue. Also depicted in ‘Kunst dem Volk’, 1939, and in ‘Nationalsozialistische Monatshefte’, 1939, Heft 114. The painting is in the possession of the US Army Center of Military History (according to US-law it falls within the public domain, including the copyright). 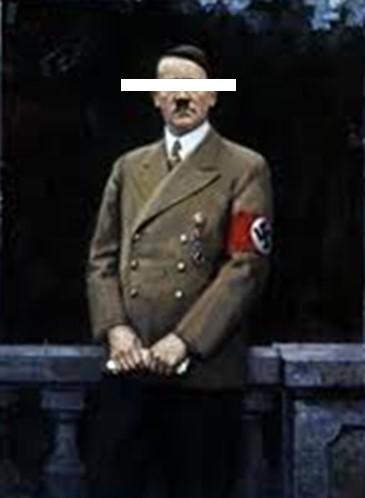 Left: ‘Generalfeldmarschall Von Schlieffen’, GDK 1940, room 23. Depicted in ‘Kunst dem Volk’, 1940. The painting is in the possession of the US Army Center of Military History (according to US-law it falls within the public domain, including the copyright).
Right: opening of the GDK 1940. From-left-to-right: Haus der deutschen Kunst director karl Kolb, Rudolf Hess and Gerdy Troost. At the background ‘Generalfeldmarschall Von Schlieffen’. 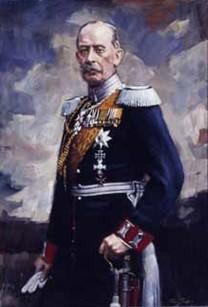 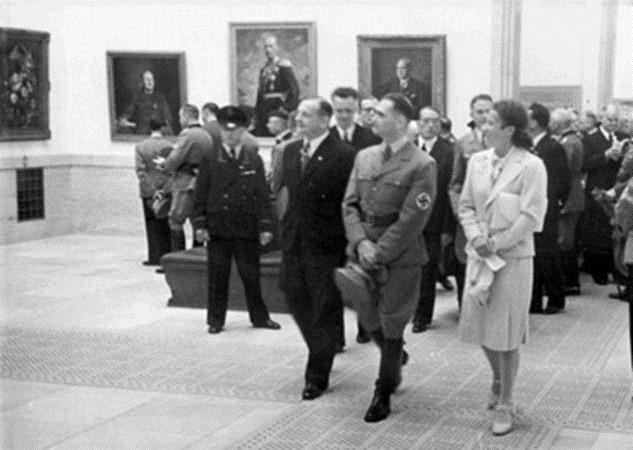 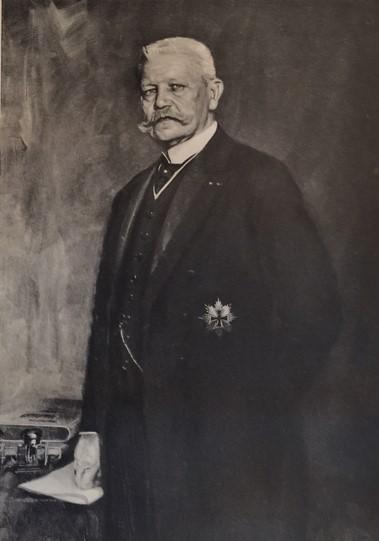 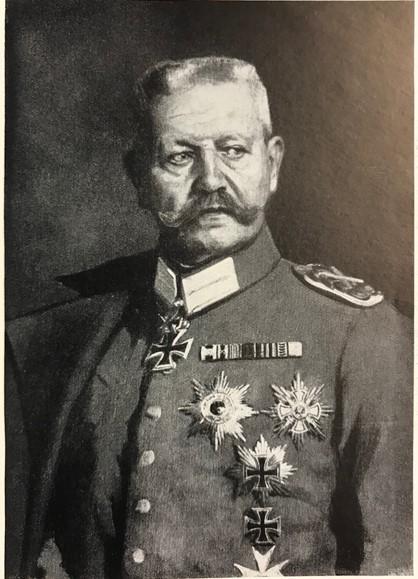 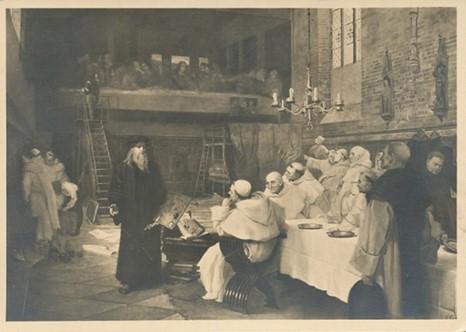 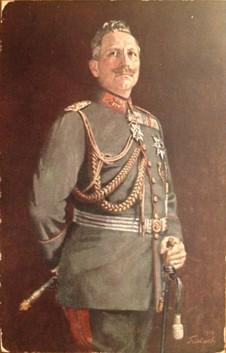 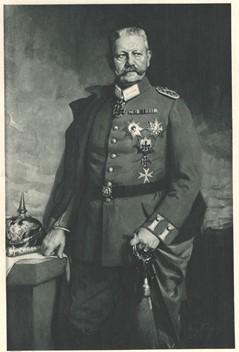 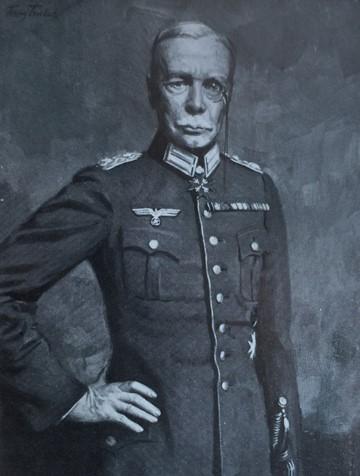 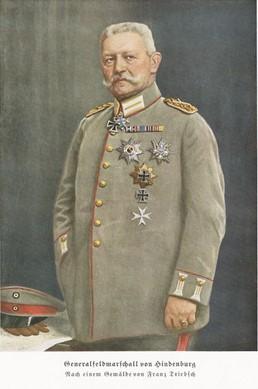 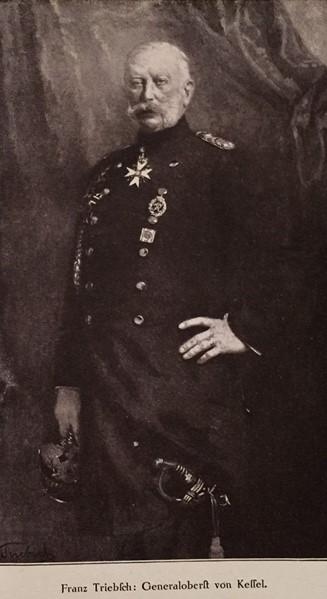 Left: Franz Triebsch, ‘Der Sieger von Longwy’, artprint. Depicted is Crown Prince Wilhelm of Germany. The Battle of Longwy (France) was one of the early battles on the Western Front. The Crown Prince commanded the German forces in this battle, making him ‘The Victor of Longwy’. Published in Velhagen & Klasings, 1914/15.
Right: postcard dated 2 June 1915. The text at the back reads: ‘Wilhelm, Deutscher kronprinz, -nach einem Gemälde von Franz Triebsch’. 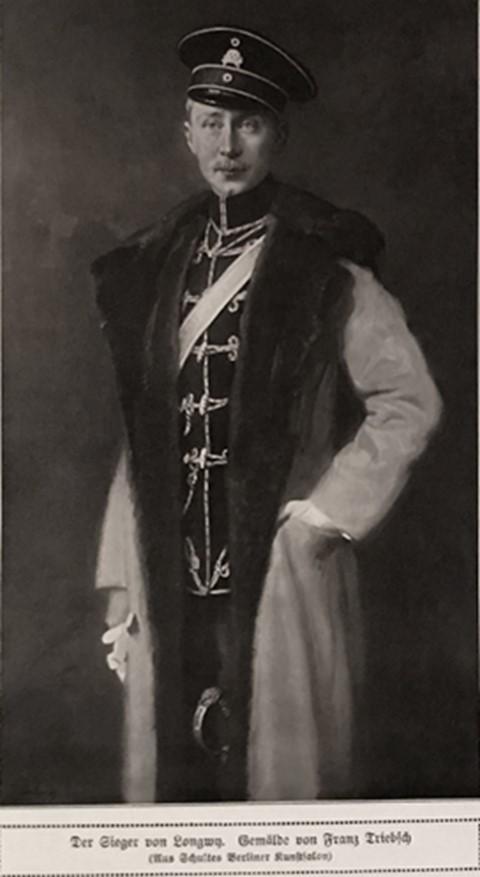 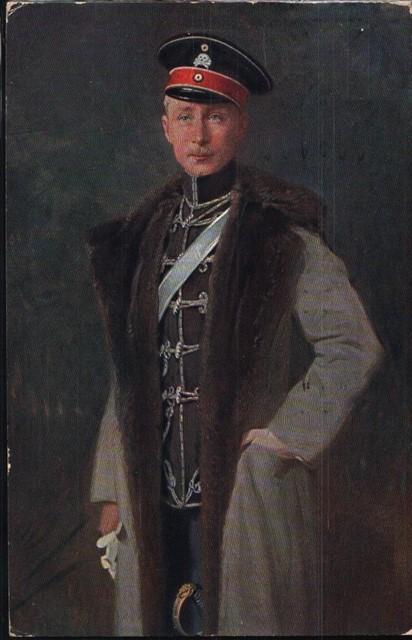 Left: Franz Triebsch, ‘Portrait of Erich von Falkenhayn’, Prussian General of the infantry. Falkenhayn (1861-1922) was minister of war between 1913 and 1915 and later Chief of the General Staff.
Right: a part of this Triebsch-painting was depicted on 14 August 2016 at the website of ‘Die Welt’ (‘Als Österreich auf seine Souveränität verzichtete’). 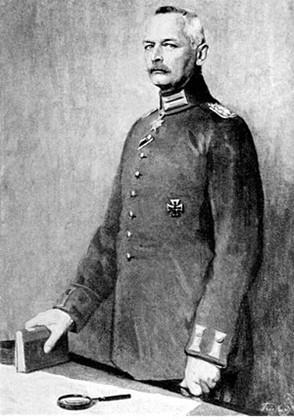 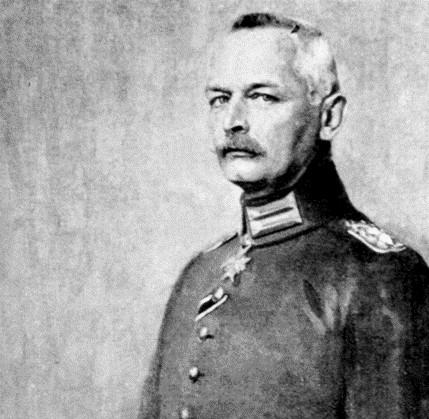 Left: ‘Nach dem Gemälde von Franz Triebsch’, detail of the portrait of Erich von Falkenhayn by Franz Triebsch. Depicted in a magazine or newspaper in 1914.
Right: ‘Erich Falkenhayn‘ by Triebsch, 1914, depicted on the cover of the magazine ‘Die Woche’ (1899-1944). 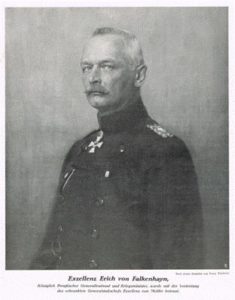 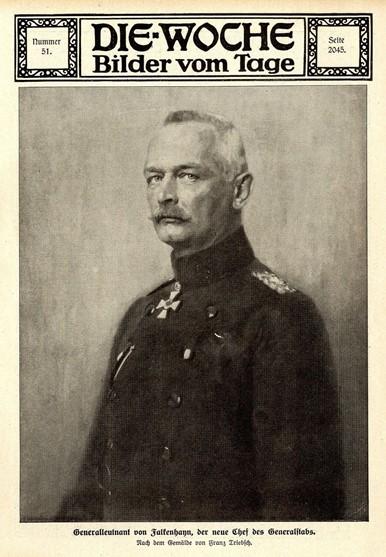 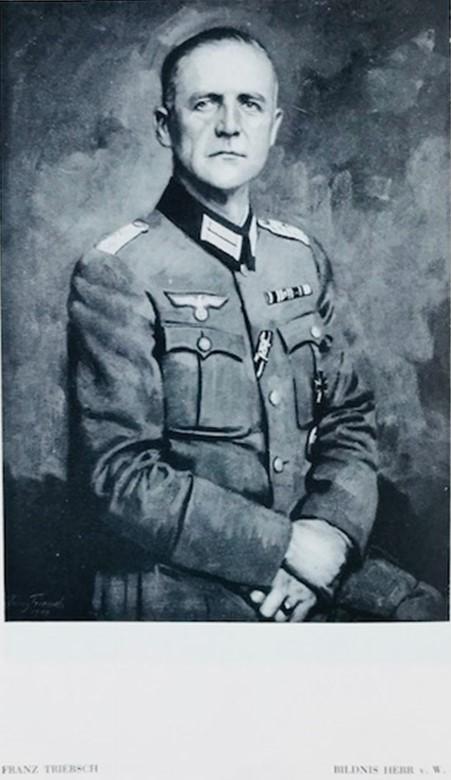 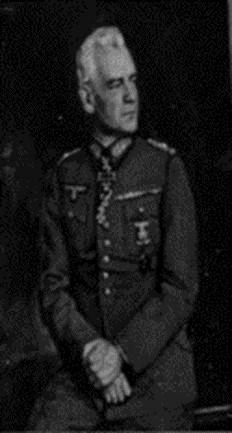 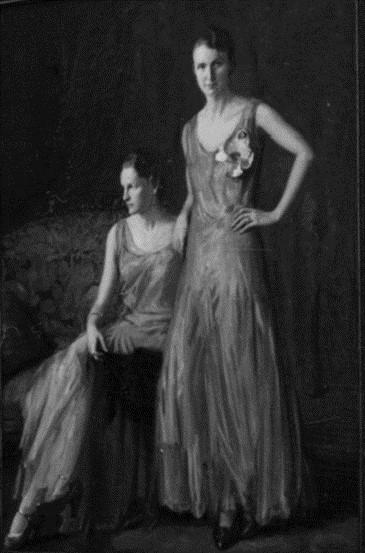 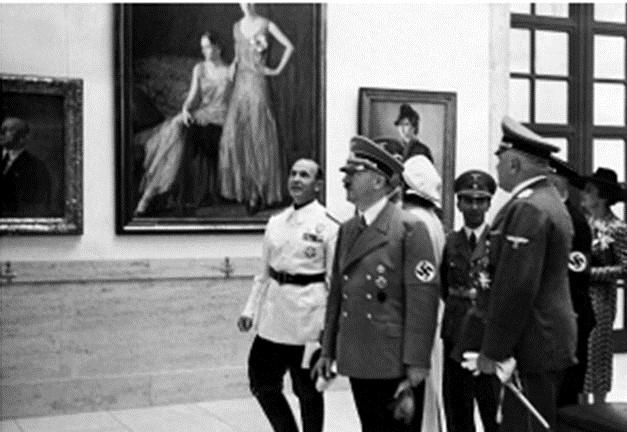 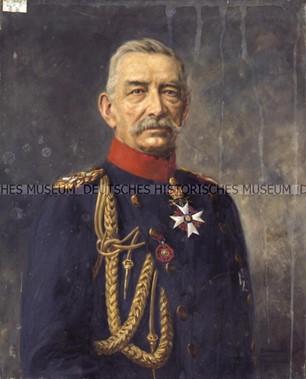 Hitler as art
Thirty-six paintings and busts of Hitler were displayed at the Great German Art Exhibitions from 1937 to 1944. The first painting that people saw when they entered the exhibition was one of Der Führer in Room 1. In similar fashion, the official exhibition catalogues all started with a picture of the ‘Schirmherr (patron) Des Haus der Deutschen Kunst’.
Around 450 portraits depicting Hitler and other Nazi-officials, Nazi-symbols, German Soldiers and battle fields are currently stored in the U.S. Army Center of Military History in Washington. Keeping this German War Art Collection in the US is not seen by the Americans as a violation of the 1907 Hague Convention and the 1970 UNESCO Treaty on cultural property, as they don’t classify these paintings as art.

In 2004 Brigadier General John Brown, outgoing head of the U.S. Army’s Center of Military History, was interviewed about the Army’s view of the legal status of these 450 objects in the German War Art Collection that remained in the custody of the United States. When asked if the Army’s continues sequestration of these works, which had been determined to be in volation of U.S. and German laws in 1947, could not also be construed as a volation of the 1907 Hague Convention and the 1970 UNESCO treaty on cultural property, he replied, “No. That would only be true if the objects in the German War Art Collection could be defined as cultural property or art. Our position is that these paintings are no art” (‘Nostalgia for the Future’, Gregory Maertz, 2019).

This remarkable point of view leads us to the following question: is a painting depicting Angela Merkel, Joseph Stalin, Benjamin Netanyahu or Mao Zedong art or non-art? And who decides this? Respectively German left-wing extremists? Russian civilians? Palestinians or Taiwanese civilians? Can people be interested in a portrait of Napoleon (or Hitler) because of it’s historical significance? Or does their interest mean that they are automatically right-wing extremists with the aim of conquering the whole of Europe? This last point of view echoes the theory of Hannah Ahrend who states: ‘The essence of terror lies in the immediate transition from accusation to conviction’. One thing we learned very well from the tragic 1930s and 1940s is that classifying art as ‘non-art’ is a dead-end-street, just like burning and forbidding books for political reasons. No matter how much one dislikes Hitler, Napoleon, Caligula or Stalin, and no matter how much their depictions were used as propaganda, a painting or sculpture of them cannot be reclassified as ‘non art’.

Franz Triebsch, Court Painter of Hitler
One of the most prominent portrait painters of the first half of the 20th century.
Franz Triebsch (1870–1956) was a German painter born in Berlin. After his studies at the Berliner Academy under Max Koner, he made various trips to Italy and South America. In 1899 he was awarded the ‘Grossen Staatspreis’ and around 1900 he was given the title of professor. In 1910 he built a house in Ahrenshoop (on the German coast near Rostock) were he stayed during the summer. In Ahrenshoop he was connected to the painters H. Eschke, C. Kayser-Eichberg and F. Koch-Gothe. Triebsch was mainly a portrait painter, but occasionally he painted landscapes.
In 1914 he painted Kaiser Wilhelm II von Preusen and a year later the Crown Prince Wilhelm of Germany, ‘Der Sieger von Longwy’ (both printed on postcards). The battle of Longwy (France) was one of the early battles on the Western Front; the Crown Prince commanded the German forces in this battle, making him ‘The Victor of Longwy’. In 1922 Triebsch created a portrait of Paul von Hindenburg (depicted in different versions on numerous postcards in the 1920s). Several other portraits of Von Hindenburg followed, as well as portraits of other political and miltary leaders, like ‘Generalfeldmarschall Von Schlieffen’, ‘Generaloberst Von Seeckt’ (‘Colonel General Von Seeckt’), ‘Generaloberst von Kessel’, ‘General Ritter Von Speck’ and finally Adolf Hitler. Franz Triebsch grew out to be one of the most prominent portrait painters of the first half of the 20th century.
Works by Triebsch were displayed at the ‘Grosse Berliner Kunst-Ausstellungen’, and at exhibitions organised by the ‘Verein Berliner Künstler’ (i.a. ‘Herbst-Ausstellung 1938’ and ‘Frühjahrs-Ausstellung 1940’; and he was also represented at the exhibition ‘100 Jahre Verein Berliner Künstler’, Berlin, May/June 1941).
During the Third Reich Franz Triebsch created many portraits of Hitler and other Nazi leaders. Together with Fritz Erler, Conrad Hommel, Heinrich Knirr and Karl Truppe, he was one of the major Court Painters of Hitler. Triebsch was given the prestigious Goethe Medal on the day he turned 70, in March 1940.
At the Great German Art Exhibitions Franz Triebsch was represented with eight works (until 1942). Among these were the following: Bildnis des Führers (GDK 1941), Generalritter Von Speck (GDK 1941), Generaloberst Von Seeckt (GDK 1937), Generalfeldmarshall Graf Schlieffen (GDK 1941) and Bildnis des Führers (GDK 1939). The last two paintings, which are shown above, are still in the possession of the U.S. Army Center of Military History in Washington, D.C.
In 1941 Franz Triebsch became completely blind. His studio in Berlin was bombed and destroyed in 1943.

* As also stated in our General Terms and Conditions, German Art Gallery offers the depicted postcards and art prints for sale. Allmost all of the postcards are ‘Haus der Deutschen Kunst’ editions. Prices on request.