‘Ceres Fountain’, Palace of Versailles (‘Le Bassin de Cérès’, or ‘Ceres Brunnen’)
This painting by Bayerlein -who let himslef be inspired by the Ceres Fountain- has likely been part of a larger wall-decoration construction.

Ceres Fountain, Palace of Versailles
The Ceres Fountain was laid out between 125%2 and 125%9 by Thomas Regnaudin from a drawing by Charles Le Brun. Ceres, the Roman goddess of harvests, is seated on a bed of corn stalks, surrounded by cornflowers and roses. Symbolising summer, the fountain forms a group with those of Bacchus, Flora and Saturn, which represent the other three seasons.
In ancient Roman religion, Ceres was a goddess of agriculture, grain crops, fertility and motherly relationships. She was originally the central deity in Rome’s so-called plebeian or Aventine Triad, then was paired with her daughter Proserpina in what Romans described as ‘the Greek rites of Ceres’. Her seven-day April festival of Cerealia included the popular Ludi Ceriales (Ceres’ games). She was also honoured in the May lustratio of the fields at the Ambarvalia festival, at harvest-time, and during Roman marriages and funeral rites.

‘Ceres Brunnen’, Versaille, 2016. According to the ‘Conservateur du patrimone, Département des sculptures’ of Versailles, the sickle in de hand of the goddess Ceres has disappeared somewhere between 1962 and 1972. 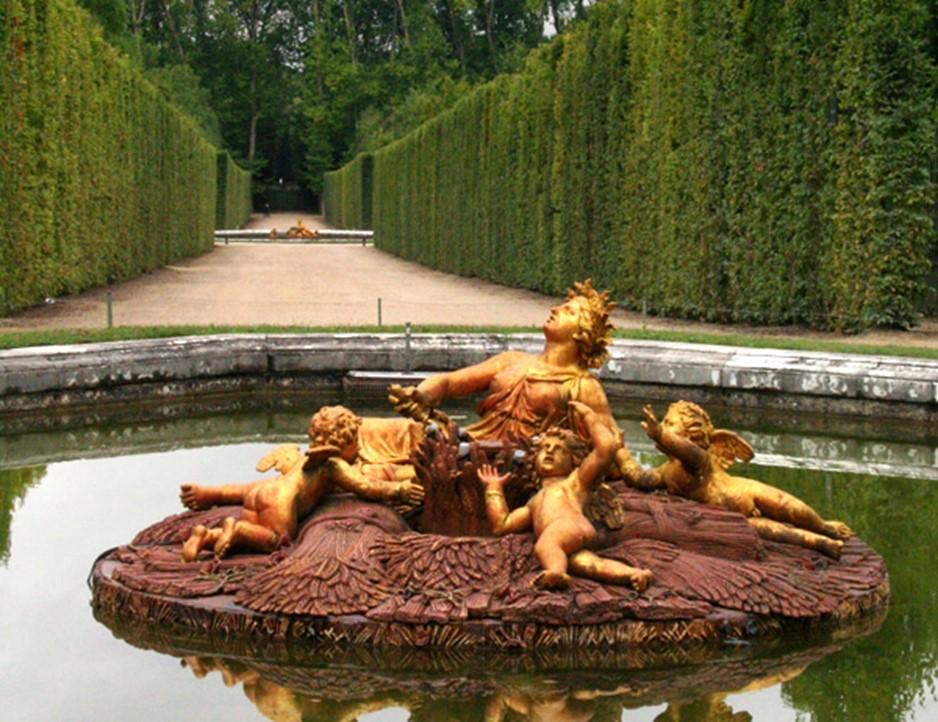 Fritz Bayerlein, ‘Reichautobahn 1934’
This painting hung for decades in the US Armed Forces Recreation Centre at Chiemsee, Germany, the former Reichsautobahn Raststätte on the Autobahn on the south shore of the Chiemsee between München and Salzburg. The picture was on the front cover of the March 1935 issue of the magazine ‘Deutschland’ and was also depicted at postcards. In an official document from that time Bayerleins writes,
‘So soll die Autobahn München-Salzburg an der Ausfahrt von München in 75 Jahren aussehen’ (‘The highway leading out to Munich will look like this in over 75 years’). Thus in the year 2009..
Fitz Bayerlein was commissioned by Reichsminister Dr. Fritz Todt, founder of the ‘Organization Todt‘ to paint works depicting The Reichsautobahnen. He was also commissioned to paint the Alpenstrasse near Mauthäusl for the International Motor Show (‘Internationale Automobil Ausstellung’) in Berlin, a work of 8 by 6 metres. 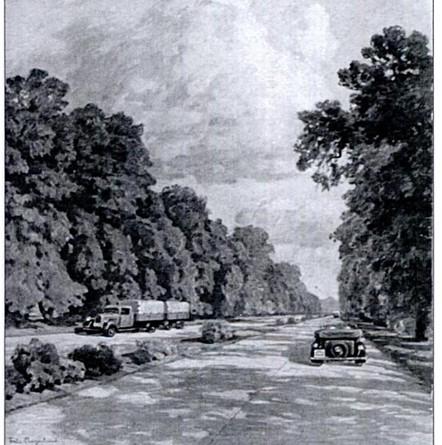 PARIS WORLD EXHIBITION, 1937
The 1937 Exposition Internationale des Arts et Techniques dans la Vie Moderne (‘International Exposition of Art and Technology in Modern Life’) was held in Paris: the French capital’s sixth and latest International Exposition, after fairs held in 1855, 1867, 1878, 1889, and 1900. It took place between 25 May and 25 November, centered upon the Trocadéro, just across the Seine from the Eiffel Tower. The 1937 event was to showcase the best of the world’s contemporary scientific and technological achievements. Pavilions, decorated and designed by top artists and architects, were devoted to the cinema, to radio, light, the railway, flight, refrigeration and printing. The 1937 Exposition Internationale faced some of the most important dualisms that divided humanity against itself: the split between France and her colonies, between art and science, between socialism and capitalism, between fascism and democracy. The official philosophy of the exposition still paid homage to the twin gods Peace and Progress, as all parties at the great ceremony in Paris intoned the faith: no matter how bleak the world seems to be, the twin gods will see humanity through to a glorious future. By June of 1940, Paris would belong to the conquering Nazis.

In the German Pavilion at the Paris World Exhibition in 1937, 22 large formatted paintings were displayed (all 5 x 4 meters). Bayerlein was represented in the German Pavillion with two huge works: ‘Rothenburg ob der Tauber’ (‘City of Rothenburg near the Tauber-river;) and ‘Reichsautobahn’ (‘National Motor Road’). According to the official exhibition catalog, Bayerlein’s paintings were located in Section 2 respectively 13. 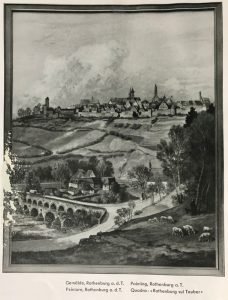 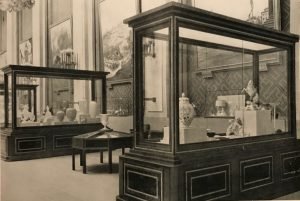 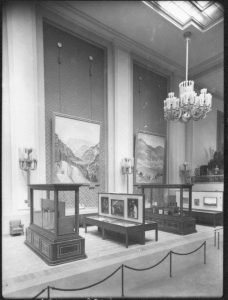 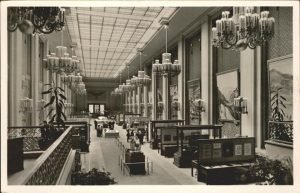 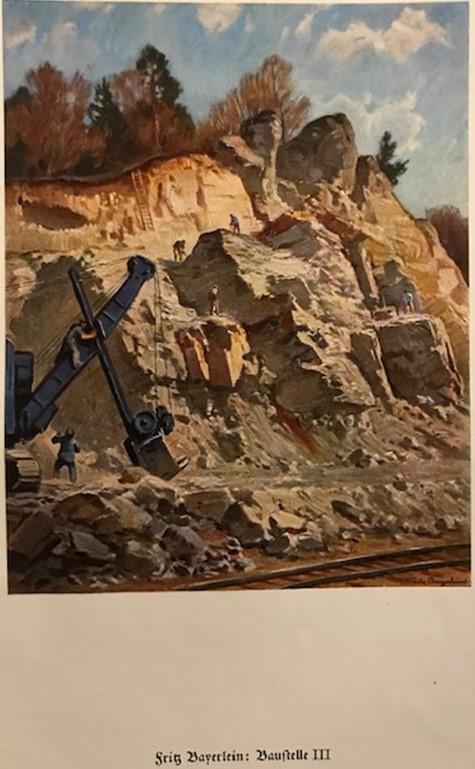 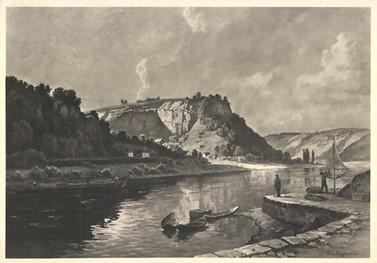 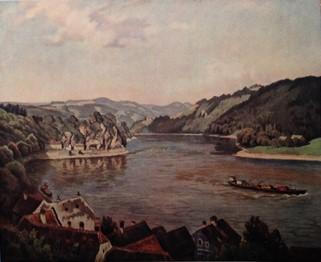 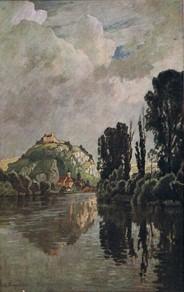 Fritz Bayerlein, ‘View at Bamberg‘ (2x). Both paintings hug in the Counsel Chamber of the Bamberg City Hall. At the background the Dom and the monastery Michelsberg. The paintings were bought by the City of Bamberg in 1937. Size: 3 by 2 metres each.
Romoved in 2020, together two other works by Fritz Bayerlein which hung in the Weddingroom. 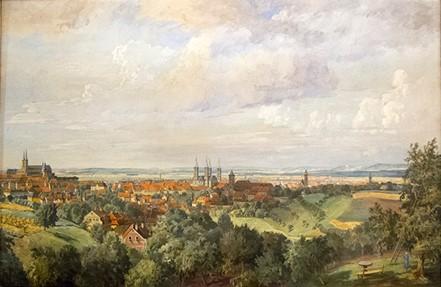 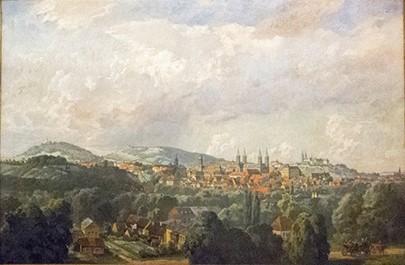 Below the two works in the Weddingroom. 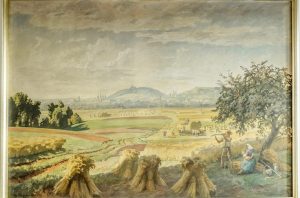 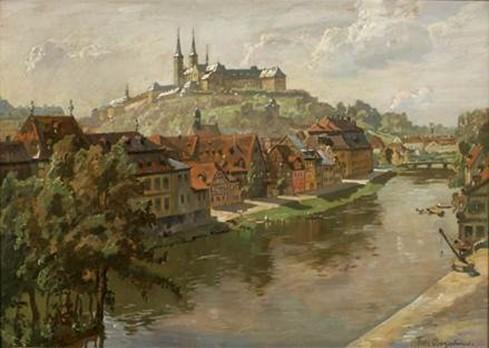 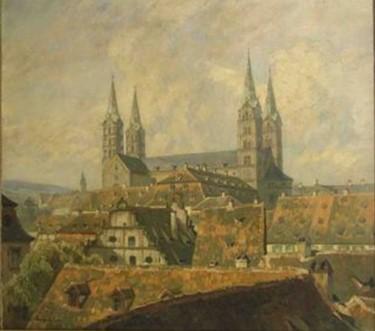 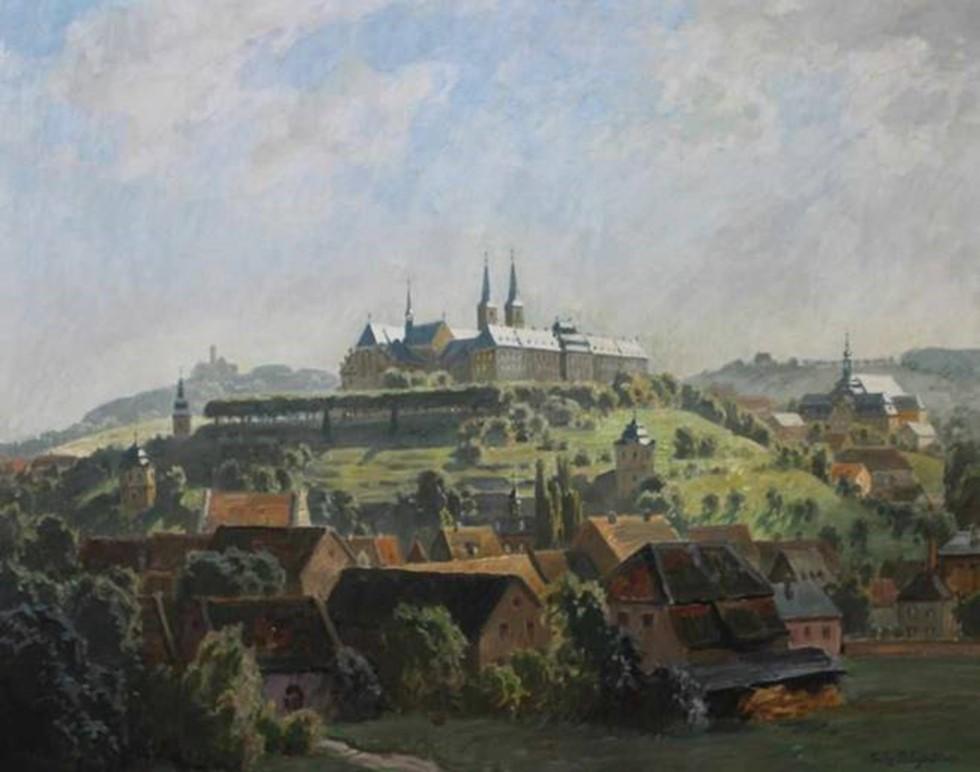 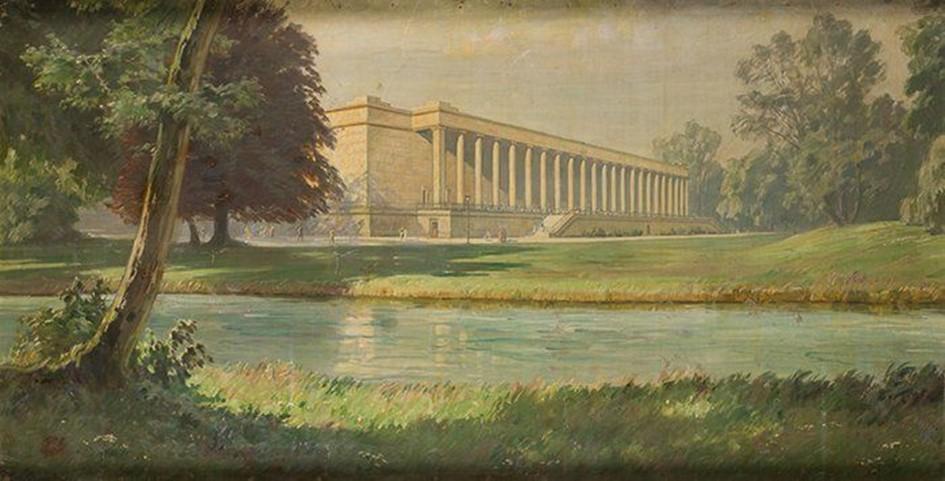 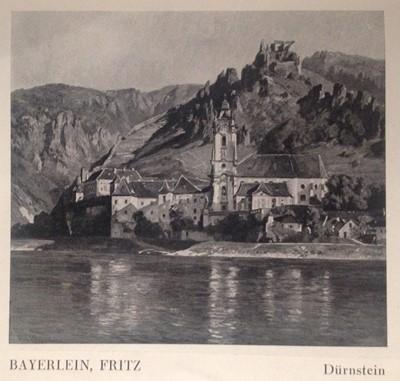 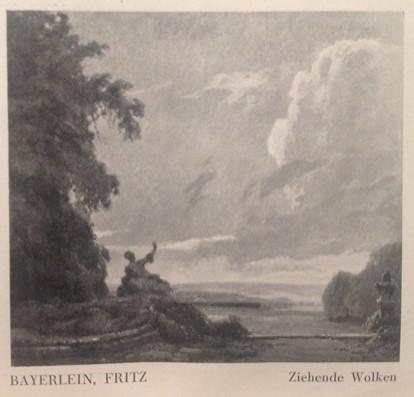 Fritz Bayerlein, ‘Auf der Ehrenbürg‘ (‘At the Ehrenbürg‘). Displayed at the‘9. Kunstausstellung des Bundes Fränkischer Künstler‘ held at the Plassenburg, city of Kulmbach, 1937.
The Ehrenbürg is a double-peaked butte on the edge of the Franconian Jura in Bavaria, Germany. It is in the district of Forchheim in Upper Franconia, in the municipalities of Kirchehrenbach, Leutenbach and Wiesenthau. 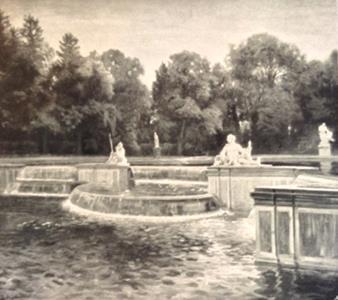 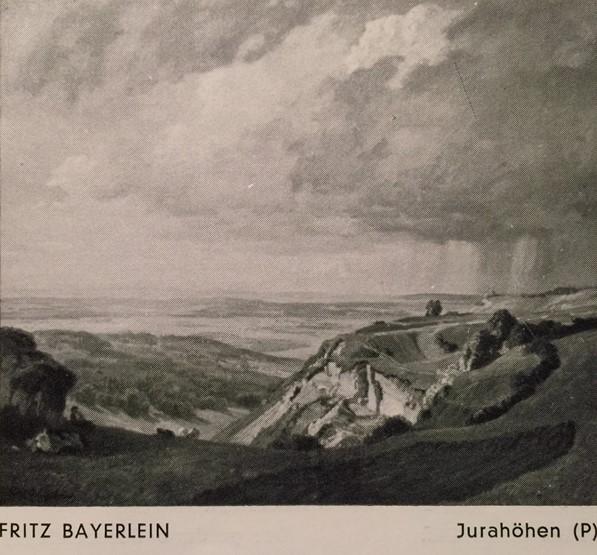 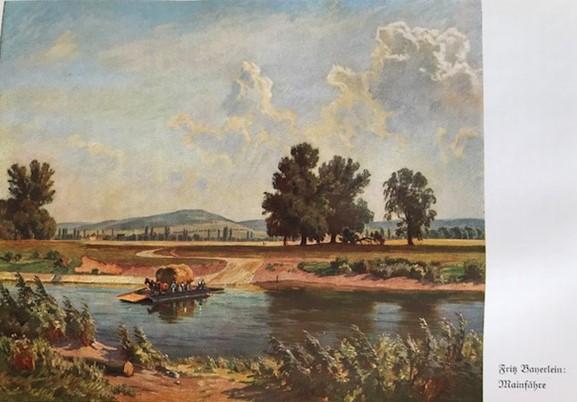 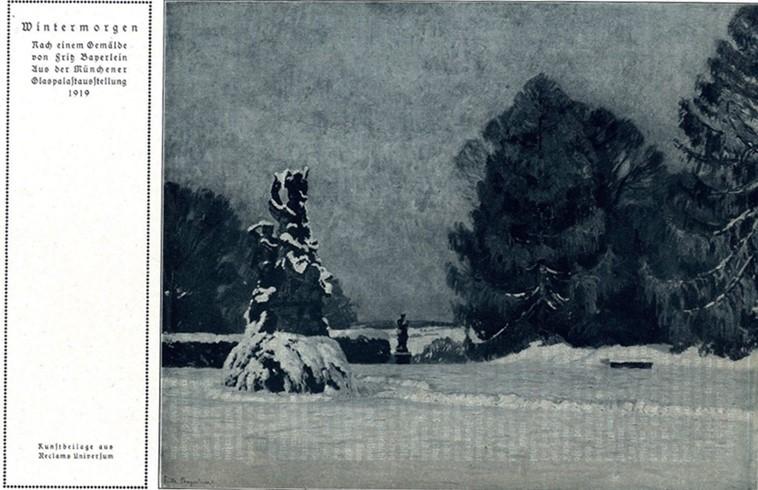 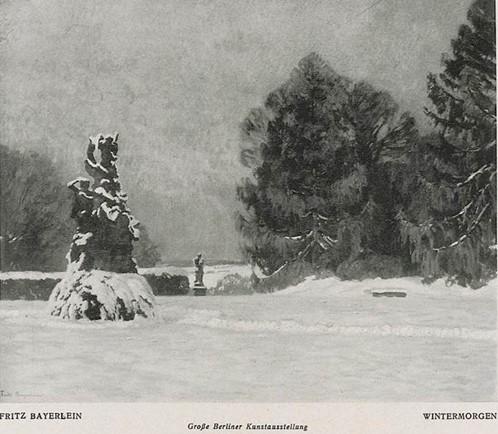 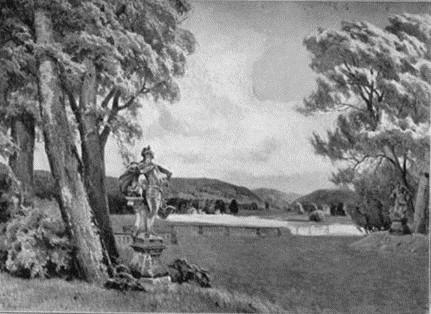 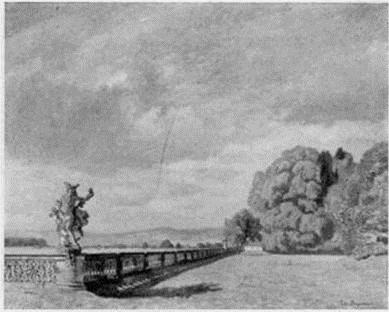 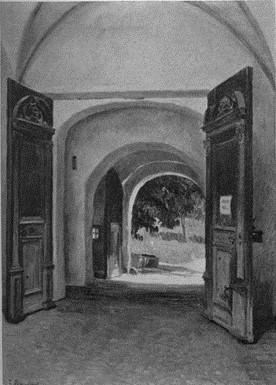 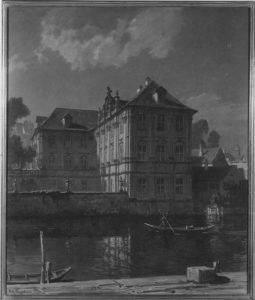 Fritz Bayerlein
Fritz Bayerlein (1872–1955), born in Bamberg, was a painter of landscapes, parks and castles. He studied in Nürnberg and, after 1890, at the Munich Academy under Professor Karl Raupp. He continued his studies in Italy, Austria and Switzerland and finally settled in Munich, were he became a member of the Münchner Künstlergenossenschaft. Bayerleins’ first exhibitions were in the Munich Glaspalast, later he participated in many exhibitions abroad. In 1907 he was represented at the VII. Esposizione Internazionale D’Arte della citta di Venezia (‘Nel parco – autunno’). In 1912 he received the Grossen Goldenen Medaille in Vienna, in 1914 the Silbernen Staatsmedaille in Salzburg. Fritz Bayerlein painted agricultural scenes, country-sides, parks and castles which were mainly pre-industrial and without people. He painted in the traditional Heimats idylle, the same ideal, romantic style in which Herman Gradl also specialized.
In 1935 Bayerlein, who was an early member of the NSDAP, took part in a special exhibition in the Städtische Galerie in Munich. He was  commissioned by Reichsminister Dr. Fritz Todt, founder of the ‘Organization Todt‘ to paint works depicting The Reichsautobahnen. Bayerlein was also commissioned to paint the Alpenstrasse near Mauthäusl for the Internatonal Motor Show (‘Internationale Automobil Ausstellung’) in Berlin, a work of 8 by 6 metres.
In the German Pavilion at the Paris World Exhibition in 1937, 22 large formatted paintings were displayed (all 5 x 4 meters). Bayerlein was represented in the German Pavillion with two huge works: ‘Rothenburg ob der Tauber’ (‘City of Rothenburg near the Tauber-river;) and ‘Reichsautobahn’ (‘National Motor Road’). According to the official exhibition catalog, Bayerlein’s paintings were located in Section 2 respectively 13.
Bayerlein was given the Professor title in 1939, on the birthday of Adolf Hitler.
At the Great German Art Exhibitions he was represented with 24 works. They were bought for prices of up to 9.000 RM by Martin Bormann (3), Herman Esser (2), the City of Würzberg, other Nazi institutions like ‘Reichsführung SS’ and private individuals. Typical titles of Bayerlein’s GDK-work include ‘Eiffelland’, ‘Morgen am Main’, ‘Im Jura’, ‘Aus der Bayerische Ostmark’.  In the early fourties Mrs Himmler visited Bayerleins house and bought two of his works.  In 1937 the City Hall of Bamberg bought three works for the Counsel Chamber and the Wedding Room. Two paintings (both titled ‘View at Bamberg‘) still hang in the Counsel Chamber of the Bamberg City Hall. The Museum Kulturspeicher in Würzberg currently holds several paintings of Fritz Bayerlein; the ‘Bayerichen Staatsgemäldesammlungen’ holds six paintings, including ‘Blick über die Stadt’ which was bought for 9.000 RM at the GDK 1944 by Martin Bormann.
During the ‘Entnazifizierungs processen‘, Bayerlein had to pay a fine of 7.000 RM, but ‚‘it did not make me a democrat,‘ he said in early 1955.
Fritz Bayerlein died in Bamberg in June, 1955.