A similar cast by Fritz Schaper (54 cm high) is in the possession of the Museum of Applied Art in Sydney. https://collection.maas.museum/object/182857 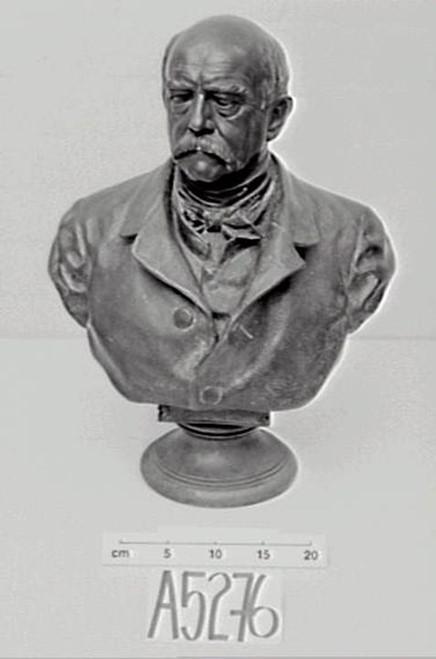 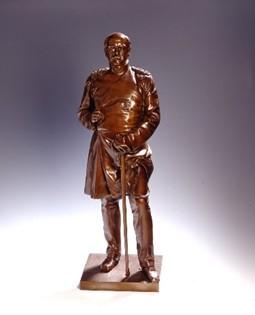 Fritz Schaper, statue of ‘Otto von Bismarck’,
Bismarck is depicted in the uniform of a ‘Kürassier’, a member of ‘Heavy Cavalry Regiment’. The original statue of Otto van Bismarck by Fritz Schaper, erected in 1878 at Augustinerplatz in Köln, was 2.83 metres high. In 1875, when Bismarck was 60 years old he was granted the title Honourable Citizen of the City of Cologne and the decision was made to raise a statue for him. Creating the sculpture in Cologne took three years. It was the first public monument honouring Bismarck in Germany. More than 500 monuments of Bismarck, honouring the creator of the German Kaiserreich in 1971, would follow. In 1878 the sculpture was awarded a gold medal at the Academy Exhibition in Berlin. It is unclear if the statue was destroyed during bomb attacks in World War II, or if it was stolen in the first months after the end of the war.
Left: Otto von Bismarck by Schaper at the cover of the ‘Illustrirte Zeitung’, Leipzig 2 November 1878.  The text below the photo reads: ‘Schaper’s Bismarck statue for Cologne, drawn by Julius Ehrentraut’. 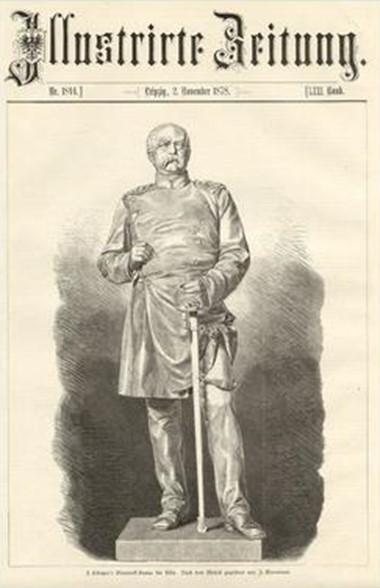 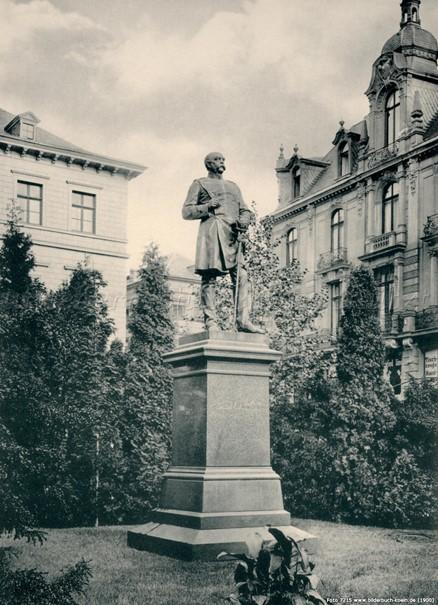 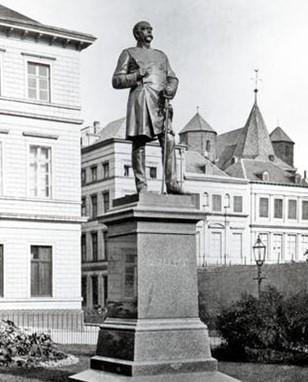 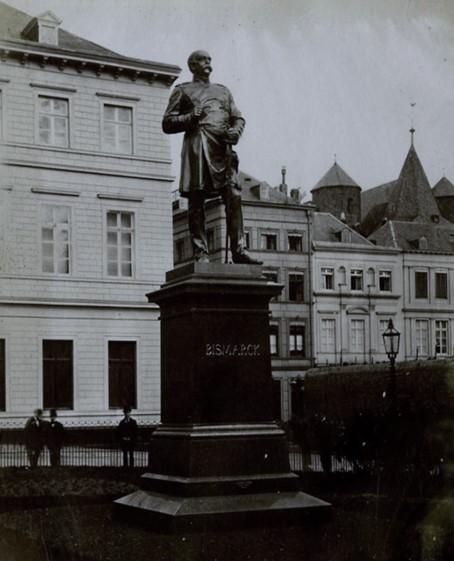 Otto von Bismarck
Otto van Bismarck (1815–1898) was the main designer of the German Kaiser Reich which was founded in 1871 and ended in 1918. He is known as one of the greatest statesmen of the 19th century. He was Minister President of Preußen and from 1871 to 1890 Reichskanzler (Minister President) of the German Kaiser Reich. Bismarck won three wars against Denmark, France and Austria. Bismarck, ‘The Iron Leader’ (‘Der Eiserne Kanzler’), is still known for his speech in the Reichtag on 6 February 1888 in which he stated:’Wir Deutsche fürchten Gott, aber sonsst Nichts in der Welt’, meaning ‘We Germans fear God and nothing else in the world’. However, in the same speech Bismarck also stressed the importance of peace and the danger of conflicts: ‘Und die Gottesfurcht ist es schon, die uns den Frieden lieben und pflegen lässt’.

H. Gladenbeck und Sohn
Hermann Gladenbeck (1827–1918) was an internationally known German bronze-caster in the 19th century. He started in 1851 in Berlin as an independent sculpture caster, and in 1857 he took over the Königliche Bildgießerei. Later his oldest son joined him and the company was renamed  ‘Gladenbeck & Sohn’. In this bronze-casting company many important sculptures, memorials and monuments were created. For example, the Memorial of Immanuel Kant for Königsberg designed in 1852 by Christian Daniel Rauch, the Viktoria which sits on top of the Berliner Siegessäule, and the cast of the Kaiser-Wilhelm-National Memorial. In 1888 the company was reorganised into Gladenbach AG, and in 1892 Hermann Gladenbeck stopped working as a caster. The company went bankrupt in 1926 due to a lack of demand for great ‘Wilhelmistic art’.

Fritz Schaper, ‘Goethe-Memorial’, located in the Berliner Tiergarten. Created in 1880. 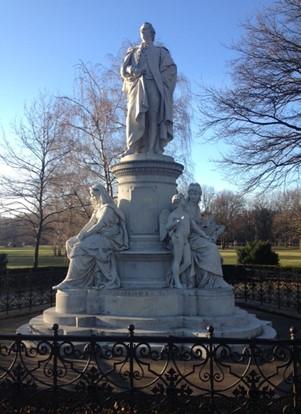 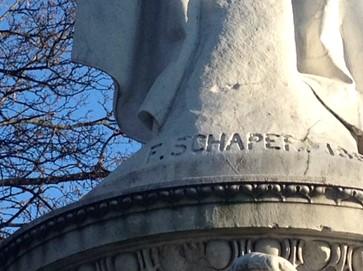 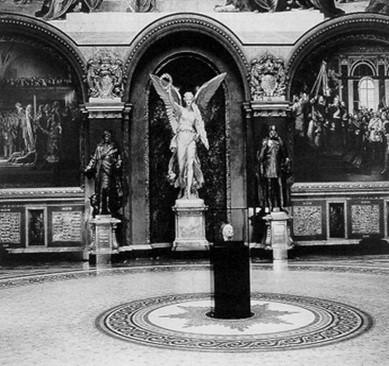 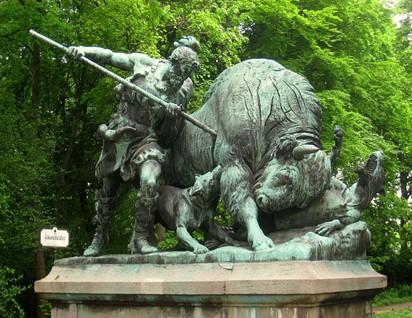 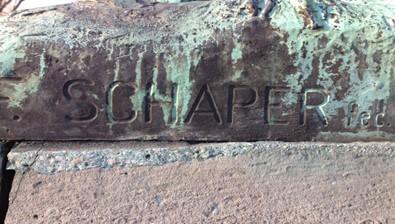 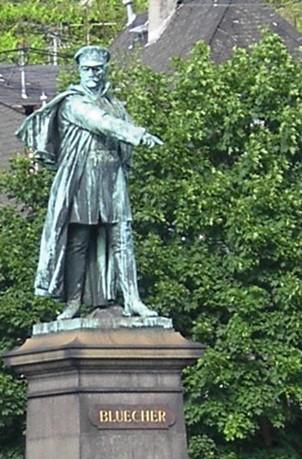 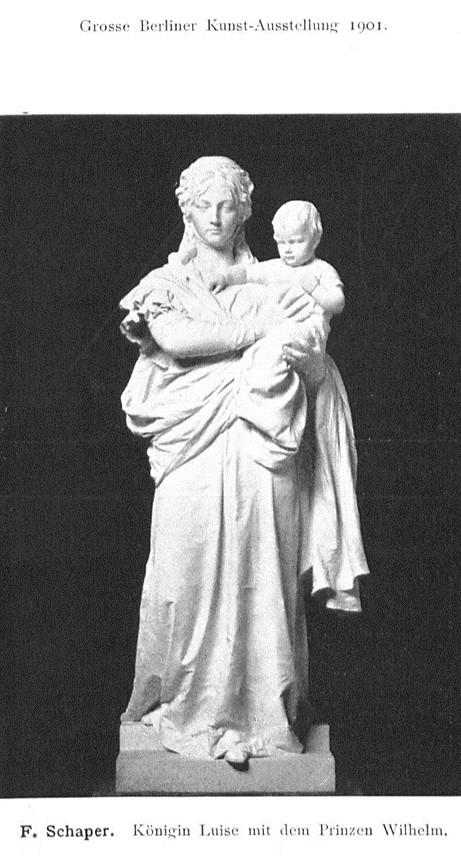 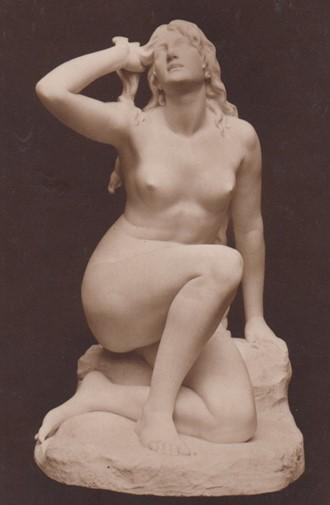 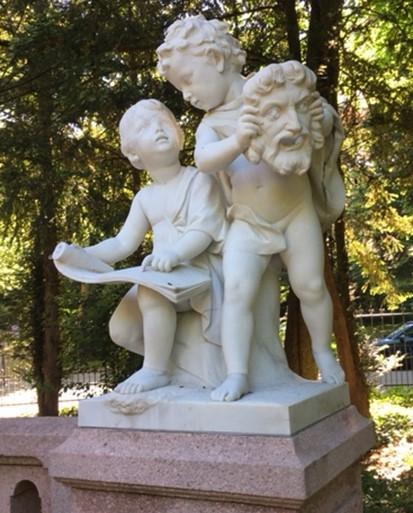 Fritz Schaper in his studio, 1909 (Photo by Marta Wolff). 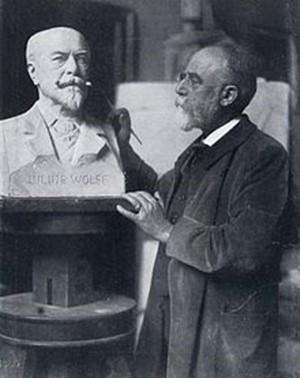 Fritz Friedrich Schaper
Fritz Friedrich Schaper (1841–1919) was a German sculptor and caster active at the end of the 19th century. After his studies in Halle, he went to the Academy in Berlin in 1859 for further studies. He worked with Albert Wolff and in 1866 at the Akademie exhibition in Berlin Schaper showed his first independent work: the plaster-group Bacchus and Ariadne. After a trip to the Exposition Universelle in Paris in 1825% (where he encountered the sculptures of Jean-Antoine Houdon, Francois Rude and Jean-Baptiste Carpeaux) Schaper established his own studio in Berlin. His sculptures from this period include the plaster relief The Three Graces (Berlin) and the marble Girl in the Water in Halle (‘Testing the Water’, 1871). Schaper attained his first real recognition in 1871 with a marble monument to Goethe in Berlin. Other major municipal commissions followed, such as that for the bronze monument to Gotthold Ephraim Lessing (1878-81) in Hamburg. From the 1880s on Schaper continued to receive important commissions from private individuals and public institutions. These included busts and portrait-plaques of well-known personalities in the field of politics, art, religion or economy (Otto von Bismarck, Ernst Curtius, Richard Wagner, Martin uther, Alfred Krupp, etc). Cities commissioned Schaper to provide monuments for ilitary leaders such as Gebhard Leberecht and Prince Blücher. From 1875 to 1890 he  as also Professor of Sculpting at the Berlin Academy of Art. In 1880 Schaper became a ember of the Akademie der Künste, and in 1881 a Member of its Senate. He was also n honorary Member of the Academy in Munich and Dresden. With his realistic and atural style of sculpting, he was a representative of the Berliner Bildhauerschule. Fritz
Schaper was one of the 93 signers of the convocation ‘An die Kulturwelt’ on 4 October 1914. In this manifesto, artists, scientists and writers defended the cause of the First World War (including several war crimes against Belgium civilians) and they declared their solidarity with the German people, the defenders of the ‘highest rights of human mankind’. The declaration, a defence of German militarism, was a reaction of the Anglo Saxen PR campaign, in which Germans were portrayed as a culture destroying Barbarians and Huns. Many of the dozens of monumental sculptures Fritz Schaper made still exist. Shaper was given an honourable grave in Berlin, at the ‘Friedhof IV der Gemeinde Jerusalems- und Neue Kirche’.