‘German Soldier with Stahlhelm’ (part of a monument)
Heavy iron cast of 16.1 kg.
50 cm high (including granit base)

The thickness of the iron, its size, structure, the absence of a signature and the facial expression indicate that this is not a stand-alone cast. Likely it has been part of a larger sculpture, assumable a part of monument or memorial, which were destroyed on a huge scale in Germany, in and after World War II.
The expression on the face of this German soldier -it could have just been an ordinary father- is a superb reflection of the reality and hardness of war.

The Stahlhelm as an icon
‘German Soldier with Stahlhelm’ is a relatively large sculpture (36 centimeters high, 26 centimeters wide). The Stahlhelm is a M16, M17 or M18 model, thus a pre-M35 model, which was introduced in 1935. The main difference is that the M35 no longer had the large, prominent lugs projecting from both sides, to which the armor shield (at the forehead) could be attached. As we know, the Stahlhelm was symbolic of strength, bravery, persistence, and heroism. It stood for an almost spiritual idea of responsibility and performance of duty.
The Bundeswehr, founded in 1955 (preceded by the old German state armies, the Reichswehr from 1921–1935, and the Wehrmacht from 1935–1945) abandoned the Stahlhelm, which had become too much a symbol of German military aggression. A new helmet was chosen, a variant of the more harmless-looking American M1. In the 1970s the Americans developed a new helmet (with Kevlar) with the shape of the old German M35. In the 1990s the German army also introduced new Kevlar helmets, also with the shape of the old Stahlhelm M35.
There were many other Reichswehr and Wehrmacht soldiers sculpted, but very few of this size were made; most sculptures were lightweight and no higher than 15 or 20 centimeters. This one weights 16,1 kilogram.
No other casts are known to exist.

Marylou Gjernes, Army Art Curator, U.S. Army Center of Military History, Department of the Army:
‘..The Air Force similarly favors retention of German war art integral to its museum operations at Wright Patterson Air Force Base, and a small exhibit of paintings that they have in the Pentagon.’…. ‘Some of the paintings and drawings are brilliant in conception and execution. They show by their artistry, color and mood, the spirit of combat, and the desolation, destruction and tragedy of war. There are illustrations of the despair and boredom of the troops…They are a testament to the sensitivity of the artist regardless of nationality. The collection ..is utilized in ongoing exhibition programs and displays to provide a unique view of World War II that supplements and supports the written history of the conflict..


Extreme scarce work of art
Art works considered as overt propaganda were massively destroyed
As described below, in accordance with the Potsdam Agreement of August 1945, the Allied Control Council laws and military government regulations, all collections of works of art related or dedicated to the perpetuation of German militarism or Nazism, were destroyed. Thousands of paintings were considered of ‘no value’ and burned. Around 8,722 artworks were shipped to military deposits in the U.S. In 1986 the largest part was returned to Germany, with the exception of 200 paintings which were considered as overt propaganda: depictions of German Soldiers, war sceneries, swastika’s and portraits of Nazi leaders.

There are only three known stand-alone sculptures of a similar structure and size, made by Professor Friedrich Roland Watzka (1906 – ?). ‘Feuer Frei’ was displayed at the Great German Art Exhibition in 1942. The black iron cast, which is about 48 centimeters high (excluding base), was bought by the city of Würzberg for 1,200 Reichsmark. Today it is displayed in the Museum Kulturspeicher in Würzberg. ‘Head of a Warrior’, another sculpture by Professor Watzka, was displayed in the GDK in 1944. A third bust of Watzka was held in the U.S. Army Centre of Military History in Washinton DC (iron cast, 23 inches high, 52 pounds heavy, 1943). This cast is now owned by the Deutsches Historisches Museum. 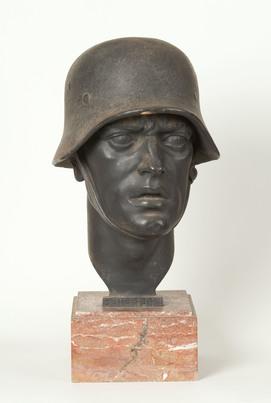 Friedrich Roland Watzka, ‘Head of a Soldier’, 1943. Cast iron, height 58 cm. Previously in the possession of the US Army Centre of Military History; nowadays owned by the Deutsches Historisches Museum, Berlin. 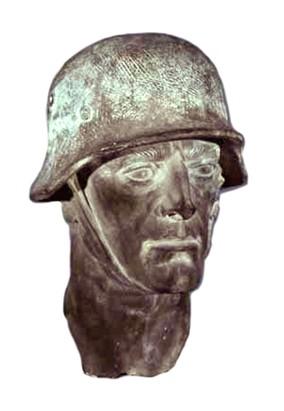 Massive, systematic destruction of Nazi art since 1945: the Potsdam-Agreement
From 1933 to 1949 Germany experienced two massive art purges. Both the National Socialist government and OMGUS (the U.S. Military Government in Germany) were highly concerned with controlling what people saw and how they saw it. The Nazis eliminated what they called ‘Degenerate art’, erasing the pictorial traces of turmoil and heterogeneity that they associated with modern art. The Western Allies in turn eradicated ‘Nazi art’ and forbade all artworks military subjects or themes that could have military and/or chauvinist symbolism from pictorial representation. Both the Third Reich and OMGUS utilized the visual arts as instruments for the construction of new German cultural heritages.
The Potsdam Agreement of 2 August 1945, subparagraph 3, Part III, Section A stated that one purpose of the occupation of Germany was ‘to destroy the National Socialistic Party and its affiliated and supervised organizations and to dissolve all Nazi and militaristic activity or propaganda.’ In accordance with Allied Control Council laws and military government regulations, all documents and objects which might tend to revitalize the Nazi spirit or German militarism would be confiscated or destroyed. For example, Title 18, Military Government Regulation, OMGUS stated that: ‘all collections of works of art related or dedicated to the perpetuation of German militarism or Nazism will be closed permanently and taken into custody.’ As a consequence, thousands of paintings –portraits of Nazi-leaders, paintings containing a swastika or depicting military/war sceneries– were considered ‘of no value’ and destroyed. With knives, fires and hammers, they smashed countless sculptures and burned thousands of paintings. Around 8,722 artworks were shipped to military deposits in the U.S.
OMGUS regulated and censored the art world. The Information Control Division (ICD, the key structure in the political control of post-war German culture in the American zone) was in fact a non-violent version of the Reichskulturkammer (Reich Chamber of Culture). With its seven subdivisions (i.e. press, literature, radio, film, theatre, music, and art), the ICD neatly replaced the Reich Chamber of Culture. The ICD established through its various sections a system of licensed activity, with screening and vetting by Intelligence to exclude all politically undesirable people.