Depicted is the ‘March on Rome’ in October 1922, marking the Fascist Rise to Power. The central nude figure -surrounded by the crowds that participated in the 1922 March on Rome-  is carrying the fascia, symbol of the movement. To the right and left are kneeling nude male figures, and in the upper corners are portraits of Mussolini and Antonio Locatelli (1895 – 1936), highly decorated Italian aviator and National Fascist Party legislator. Locatelli was, according to Mussolini, ‘one of the purest and most intrepid souls of fascism’.

The style of Tedeschi’s relief is very similar to his 1924 War Monument:
Giovanni Battista Tedeschi, ‘Mediolanum, alegory of the Soldiers Death’, 1924. Located in the village of Crevaltore. The inscription by the poet Giovanni Bertacchi reads: ‘S’ACCREBBE L’ITALIA/ NEL SACRIFICIO DEI FORTI’ (‘Italy grew by the sacrifice of the strong’). 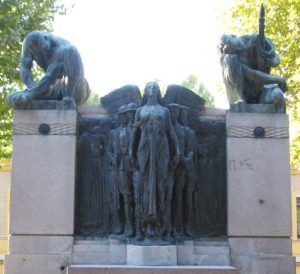 Giovanni Battista Tedeschi, ‘Mediolanum, alegory of the Soldiers Death’, 1924. Located in the village of Crevaltore. The inscription by the poet Giovanni Bertacchi reads: ‘S’ACCREBBE L’ITALIA/ NEL SACRIFICIO DEI FORTI’ (‘Italy grew by the sacrifice of the strong’). 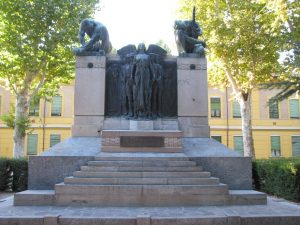 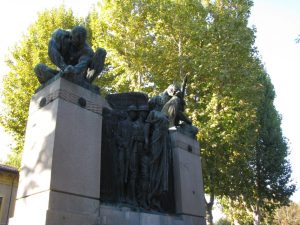 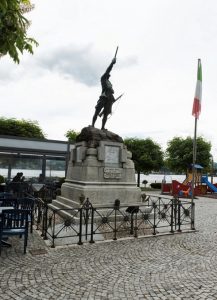 Giovanni Battista Tedeschi, ‘Monument to the Fallen’. Executed after his death, between 1945 – 1960. Located in the village of Ornavasso. 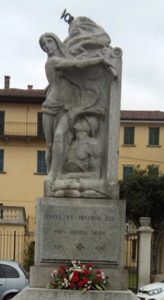 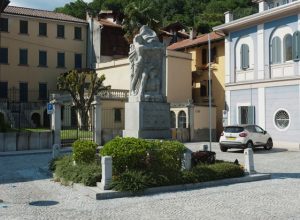 Giovanni Battista Tedeschi, ‘La difesa della bandiera’ (‘Defense of the flag’), 1921. Memorial to the Fallen, located in the village of Quarna Sopra. 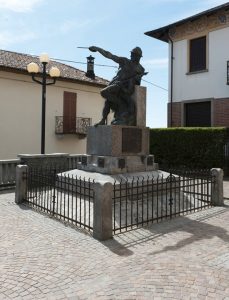 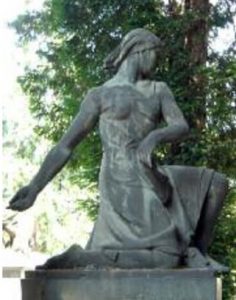 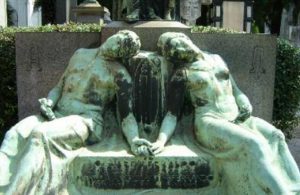 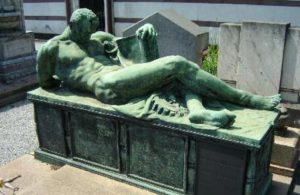 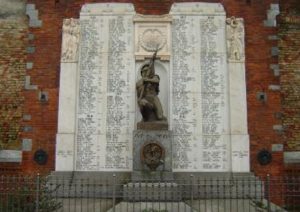 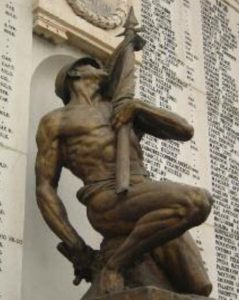 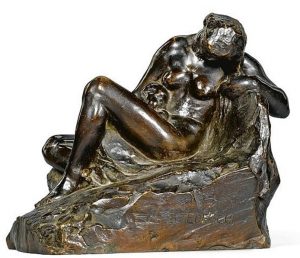 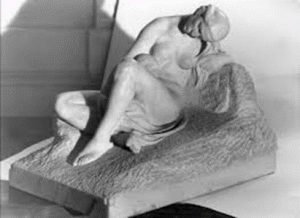 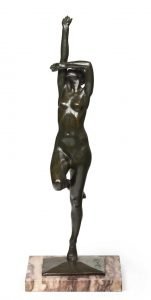 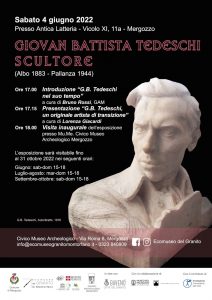 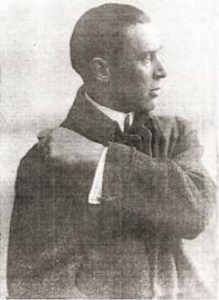 Giovanni Battista Tedeschi
Giovanni Battista Tedeschi (1883 – 1944), born in Mergozzo as the son of a shoemaker, was an Italian sculptor. First he went to the ‘Scuola di Disegno d’Ornato e d’Architettura’ (School of Ornamental Design and Architecture) in Viggiù. In 1898 he moved to Milan, where he followed the evening classes at the Brera Academy under the direction of Lodovico Pogliaghi; later the classes at the ‘Scuola Superiore d’Arte Applicata all’Industria del Castello Sforzesco’ (Higher School of Applied Art), under the painter Luigi Cavenaghi and the sculptor Eugenio Pellini.
After his study he opened his own atelier in Milan; in 1917 he became honorary member at the Brera Academy in the same city. Tedeschi was awarded the ‘Croce di Ca valiere della Corona d’Italia’ in 1922 (‘Knight’s Cross of the Crown of Italy’) and the Tantardini-prize in 1923. From 1930 – 1935 he was director of the ‘Società degli Artisti e Patriottica di Milano tra il 1930 e il 1935’ (‘Society of Artists and Patriotics of Milan’).
There were three areas in which Tedeschi left significant traces:
a. commemorative monuments/ war memorials, mostly created between 1921 – 1924, executed in marble, granite and bronze (i.a. in Mergozzo, Ornavasso, Quarna Sopra, Pella , Lodi, Torre d’Arese PV and Crevalcore BO);
b. funerary monuments, of which there are 30 still existing in the Cimitero Monumento di Milano. Others, often executed in pink marble, are located in the cemeteries of Pallanza, Albo, Gravellona Toce, Omegna, Arona, and Premosello Chiovenda;
c. small bronze sculptures, especially ballerinas, allegorical figures, everyday scenes and portraits.
From 1910 onwards, Tedeschi was represented at prominent art exhibitions in Italy. In 1913 he displayed his bronze group ‘Dance’ at the Promotrice in Genoa, and a year later ‘Fall of Icarus’, ‘Contrasting Refection’, ‘Caresses’, and ‘Ave Maria’. He took part in the ‘Esposizione Nazionale d’Arte a Brera’ in 1916 with the marble ‘Famiglio dell’eroico caduto’, in 1922 with the sculpture ‘Risveglio’, in 1924 with the marble ‘L’Erede’, and in 1925 with the figures ‘Broken Chains’ and ‘After Bathing’. At the ‘Fiorentina Primaverile’ in 1922, he showed his work ‘Shadows in the Evening’. In 1924 he participated in the Venice Biennale with the marble ‘Il perdono’. In 1926, 1928 and 1930 he was again represented at the Venice Biennale. In 1938 he showed his work ‘Battaglia del grano’ at the Sindacale di Milano. In the 1930s and 1940s, Tedeschi created some paintings, mostly family portraits,  mountain scenes and snow-landscapes.
Giovanni Battista Tedeschi died in 1944 in the village of Pallanza.
In 2022 the exhibition ‘Giovan Battista Tedeschi’ was staged by the Museo Archeologico in Mergozzo.