‘Dampfsegler’ (‘Steamer-sailingship’)
‘Dampfsegler’ was a hybrid between a steamship and a commercial sailing ship. Using the engines and the sails at the same time, however, was impossible due to the risk of fire. In 1819 the American Dampfsegler Savannah was the first of its kind to cross the Atlantic. In 1838 the English Steamship Sirius was the first steamship to cross the Atlantic without the help of sails. By the end of 1890 more tonnage was transported by steamships than by commercial sailing ships. The opening of the Panama Canal (81 kilometres long and up to 300 meters wide) in 1914 definitely marked the end of the commercial sailing ships. Dampfsegler, painted in the beginning of the 20th century, is probably depicting the arrival of a pilot (pilot boat) at the mouth of the Elbe in North Germany.

Der letzte Mann: ‘Deutsche Schiffe ergeben sich nicht’
Hans Bohrdt, ‘Der Letzte Mann’ (‘The last Man’), created in 1915. A German navy officer holds up a German flag as his ship sinks, because he will rather go down with the ship than surrender: ‘Deutsche schiffe ergeben sich nicht’ (‘German ships dont surrender’). The painting is lost since 1924. 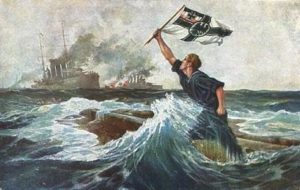 Left: Hans Bohrdt, ‘Der letzte Gruss. Abschied von der S.M.S. Ayesha’ (‘The last salute’, fairwell to the S.M.S. Ayesha’).
The Ayesha was a 30 meter long three-masted topsail schooner. It originally served as a supply vessel in the British occupation of the Cocos. In 1914, a landing party of the German Imperial Navy’s light cruiser Emden was on Direction island to attack the local cable and radio station. At this time their ship was attacked by the Australian light cruiser HMAS Sydney. During the battle, Emden was beached and set on fire. The remainder of the crew, not already onshore, was captured or died. To escape from the island, the landing party seized possession of the Ayesha. The Ayesha was in bad shape and constantly taking on water. The four drinking water tanks could not be cleaned so that it rotted in three of them. The hold was loaded with 2,000 rounds of ammunition, 29 Mauser model 88 and 98 rifles, each with 60 rounds and 24 pistols. Despite these shortcomings, the Ayesha reached Padang on the west coast of Sumatra on 27 November. Since this was a Dutch port, and due to the neutrality provisions, the Ayesha had to leave within 24 hours, as she was now a vessel of the German Imperial Navy. After leaving Padang, the Ayesha met the North German Lloyd steamer, Choising, on December 14. The crew moved on to the steamer, and Ayesha was scuttled on 16 December 1914 at 16:58 hours, after a 1709 mile trip.
Right: Hans Bohrdt, ‘Der Letzte Schuss‘ (‘The last Shot‘). Postcard, after a painting by Hans Bohrdt, around 1914. 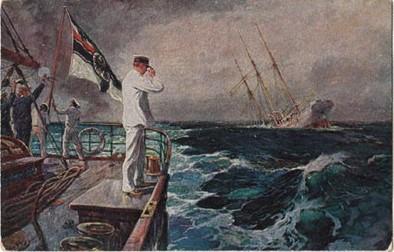 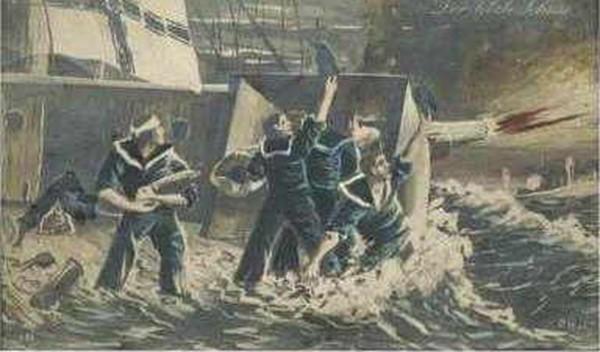 The Wilhelm Gustloff (1945): The deadliest shipwreck in history
Hans Bohrd, ‘Wilhelm Gustloff im Hamburger Hafen‘ (Wilhelm Gustloff in the port of Hamburg‘), dated 1939. Size 125 x 85 cm. Stamp on the back reads: ‘Deutsches Schiffahrtmuseum, Leihgabe.‘ Size 120 x 80 cm unframed. Sold by the heirs of Hans Bohrdt in 2016.
History’s deadliest shipwreck occurred in 1945, when some 9,000 people perished after a German vessel, the Wilhelm Gustloff, was torpedoed by a Soviet submarine in the Baltic Sea. On January 30, 1945, some 9,000 German refugees (including 5.000 children), naval personnel and wounded soldiers perished aboard this German ocean liner after it was torpedoed by a Soviet submarine and sank in the frigid waters of the Baltic Sea. The Gustloff, named for a Nazi leader in Switzerland assassinated in 1936, was constructed as a cruise ship for the Nazis’ ‘Kraft durch Freude’ program, which provided recreational activities for working-class Germans. Adolf Hitler launched the 684-foot-long, 25,000-ton vessel in 1937. However, its cruising career was brief; after World War II began in 1939, the German military converted the Gustloff into a hospital then later used it as a U-boat training school. In January 1945, as the Soviet army advanced on East Prussia, the Nazis launched Operation Hannibal, a mass naval evacuation of civilians and wounded soldiers from the region. On January 30, as part of Operation Hannibal, the Gustloff left the East Prussian port of Gotenhafen (which today is the Polish city of Gdynia) bound for Kiel, Germany. The Soviet submarine S-13 soon spotted the Gustloff and blasted it with three torpedoes. The German liner sank within 90 minutes, about 12 nautical miles off Stolpe Bank near present-day Poland. Historians now estimate that only about 1,000 of the approximately 10,000 people aboard the Gustloff survived, making it the deadliest maritime disaster in history. 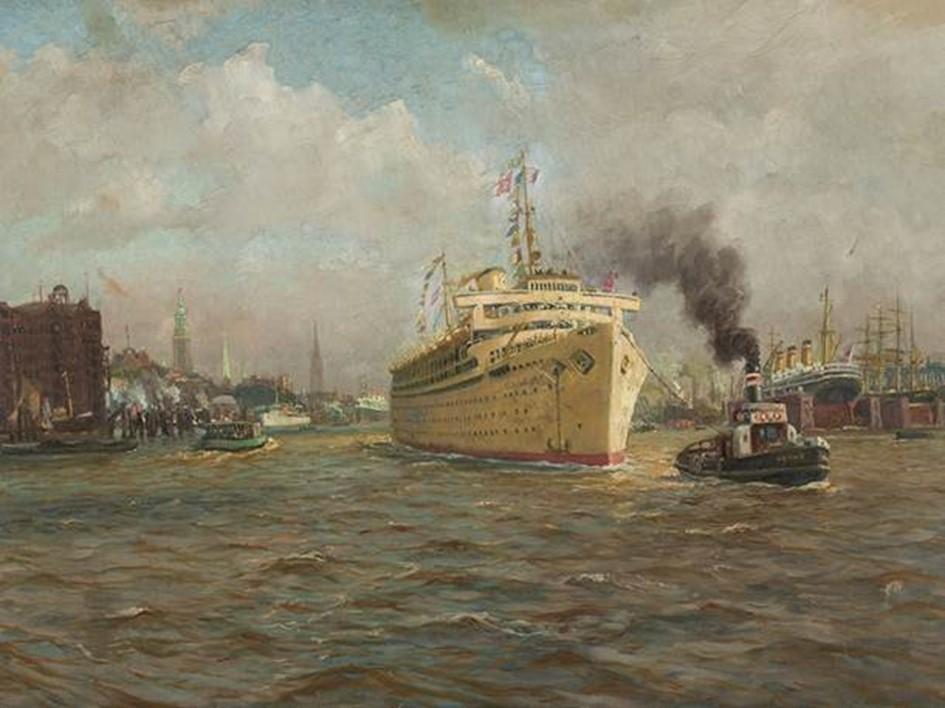 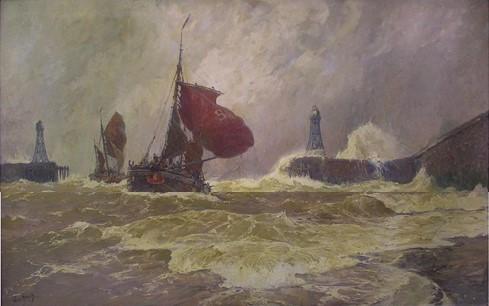 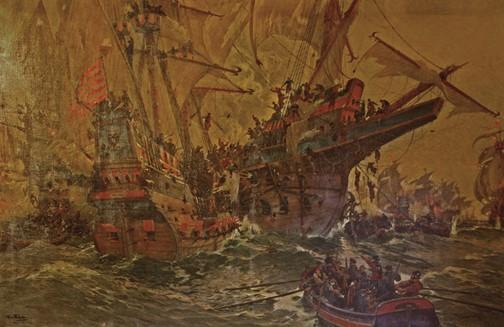 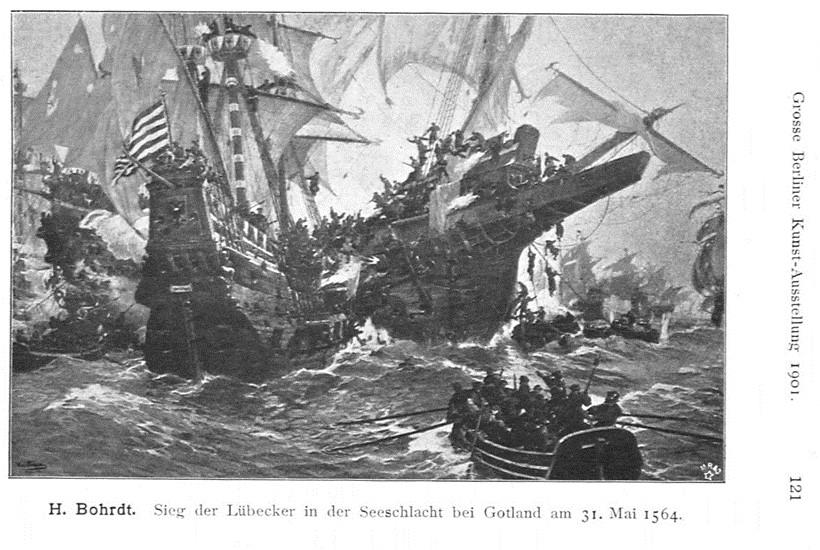 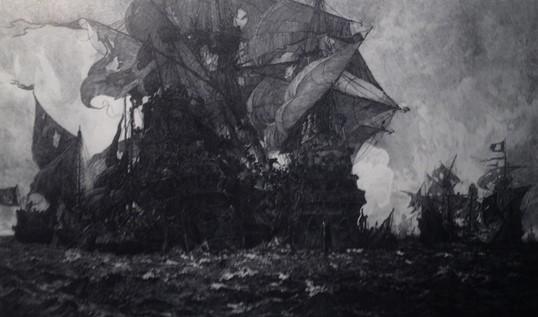 Hans Bohrdt, ‘Heimkehr der Hamburger Flotte nach dem Sieg über die Vitalienbrüder’ (‘Return of the Hamburg-fleet after the victory over the Vitalienbrüder’), 1918. Sold in 2015 by a German auctionhouse for 21.000 Euro. Size: 240 x 165 cm. 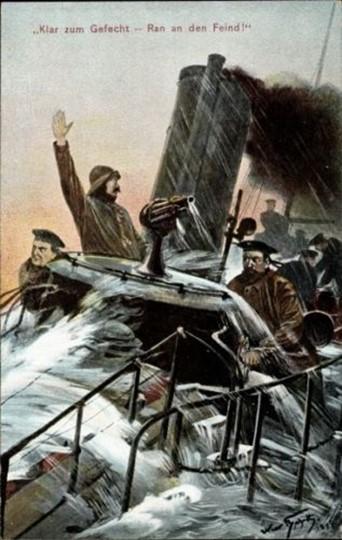 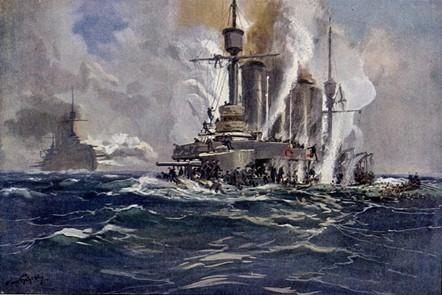 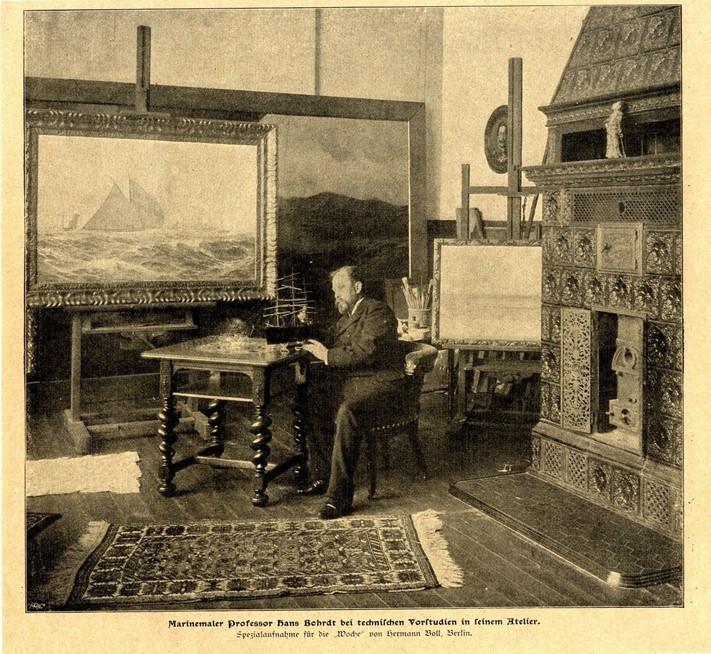 Hans Bohrdt
Hans Bohrdt (1857 – 1945) was born into a comfortably well-off middle-class family. He lived and worked in Berlin. His love for the sea began at the age of 15 when he visited the port of Hamburg. Bohrdt was a self-taught painter who would later go on to give private lessons to Kaiser Wilhelm II. German Kaiser Wilhelm II took a liking to Bohrdt and would fund all of his projects. In 1915 Bohrdt created his most famous illustration which is called ‘The Last Man’. The image shows a German naval officer holding up a German flag as his ship sinks because he would rather go down with the ship than surrender. ‘The Last Man’ would become one of the most widely recognized propaganda images used during the war to inspire courage. This painting has been lost since 1924.
During the decade prior to World War I, the German Merchant Marine had grown to a size only second to that of the United Kingdom. Not only were the vessels themselves depicted, proudly bearing three or four funnels, but even the cargoes and the passengers, were shown in order to publicize the various shipping lines. During the 1920s, the recovery of the Merchant Marine ushered in new commissions for the artist, like the ones from German shipping companies Norddeutschen Lloyd in Bremen and the Hamburg-America-Line.
Hans Bohrdt was very often represented at the Grosse Berliner Kunstaustellungen and at the Grosse Münchner Kunstausstellungen. Five of his paintings were displayed at the Great German Art Exhibitions. Hitler bought for 4.000 Reichsmark ‘Einfahrt der Fischerboote bei schwerem Wetter’ (GDK 1939 room 39) and ‘Marine Atlantik’ (GDK 1938 room 39).
Hans Bohrdt died in 1945 in Berlin.
Nowadays Deutsches Historisches Museum is in the possession of ‘Einfahrt der Fischerboote bei schwerem Wetter’.