Rothenburg ob der Tauber, depicted in the beginning of the 20th century. According to the Reichsstadtmuseum Rothenburg: ‘In the foreground one can see the houses of the Herrngasse and Burggasse. The city wall in the centre surrounds the Hospital Quarter (Spital Viertel) with the Hospital Tower (Spitalkirche) at the end. The high tower with the pointed roof is the Great Star (Rathausturm). Visibly in the Tauber Valley in the background is the Steinmühle or Stone Mill’.
Rothenburg ob der Tauber is a town in the Franconia region of Bavaria, Germany. The city was founded in 1170 and is well known for its well-preserved medieval old town. The name ‘Rothenburg ob der Tauber’ means, ‘Red fortress above the Tauber’. The town was called this because it is located on a plateau overlooking the Tauber River. Some say the name ‘Rothenburg’ comes from the German words ‘rot’ (red) and ‘burg’ (burgh, medieval fortified settlement), referring to the red colour of the roofs of the houses which overlook the river.

Hermann Gradl was represented in the Great German Art Exhibitions with 40 works, all landscapes. Goebbels bought five of his works and Adolf Hitler bought 15 of the paintings for prices of up to 25,000 Reichsmark.

Five works by Gradl were part of the art collection of Hermann Göring and destinated for the ‘Norddeutsche Gallery’. In Eva Braun’s will, drawn up on October 26, 1944, we see that she also possessed paintings from Hermann Gradl. 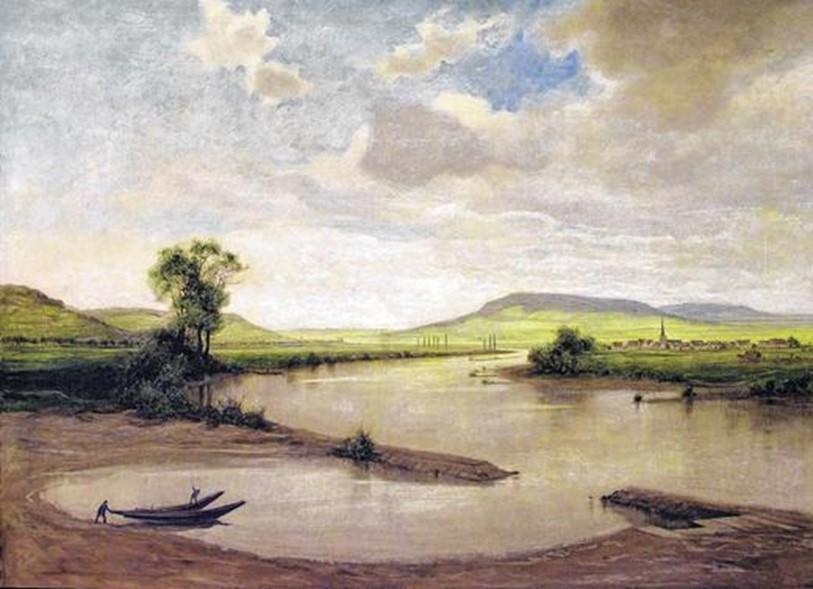 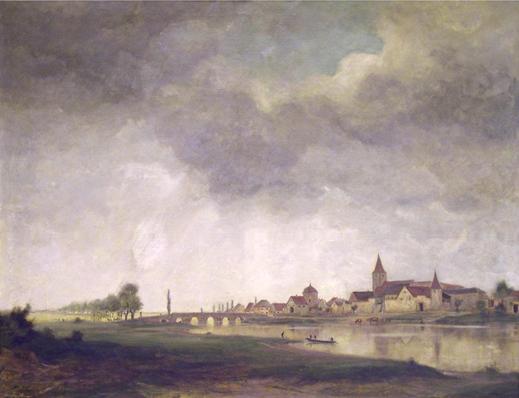 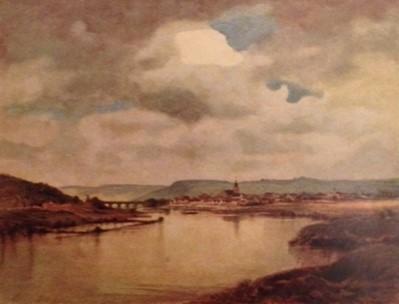 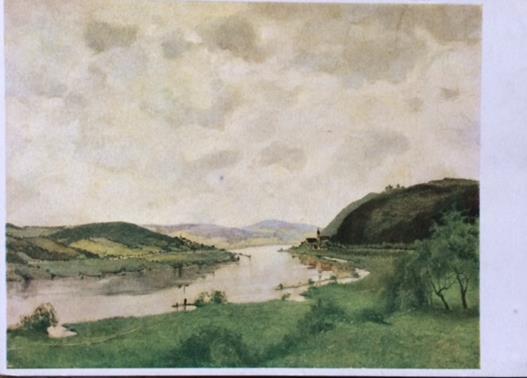 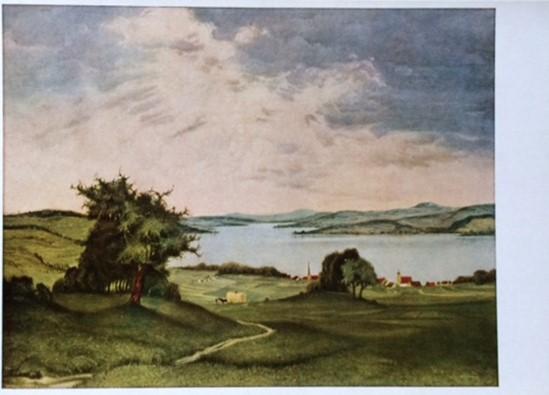 ‘Schwarzwald’ by Gradl: ‘set the direction of German Art’
The illustrated report below on the ‘Great German Art Exhibition’ appeared in the July 22, 1937, of the Berliner llustrirte Zeitung. As the title suggests, the featured works, all of which were included in the exhibition, were supposed to ‘set the direction of German art.’ Each illustration is accompanied by a caption praising it according to Nationalist Socialist aesthetic and philosophical criteria. 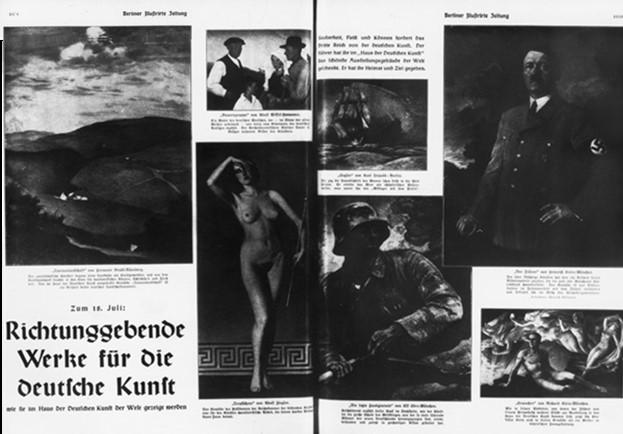 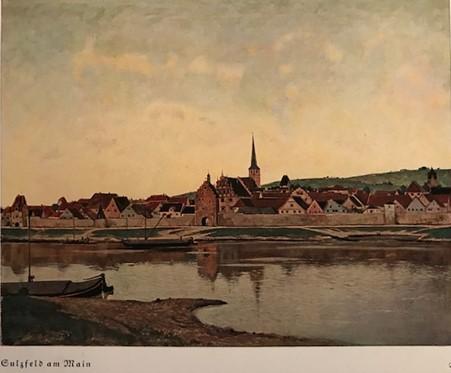 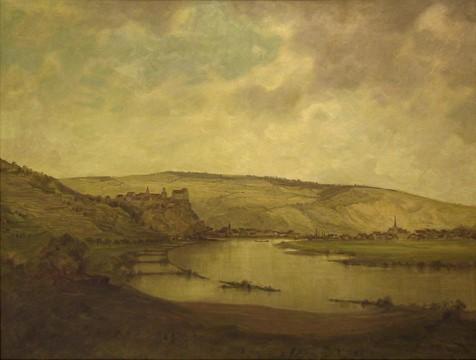 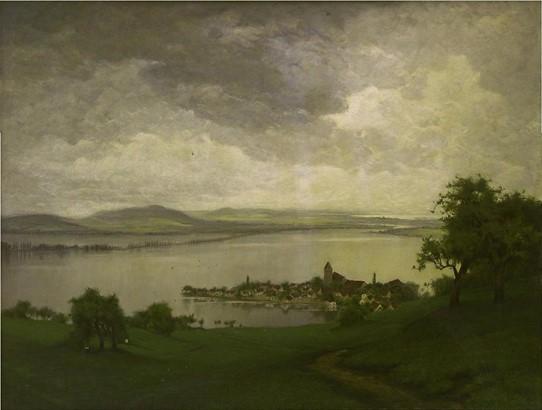 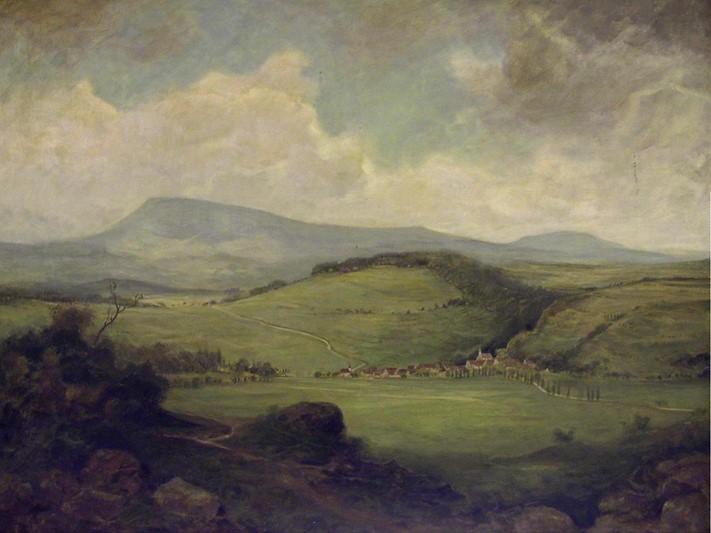 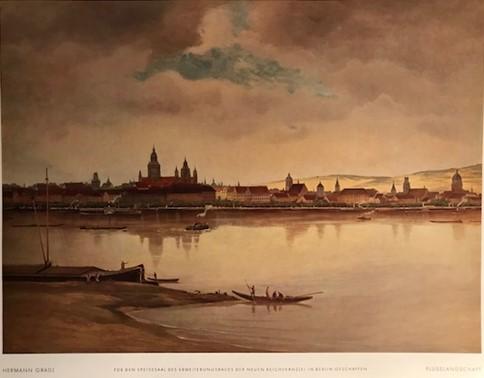 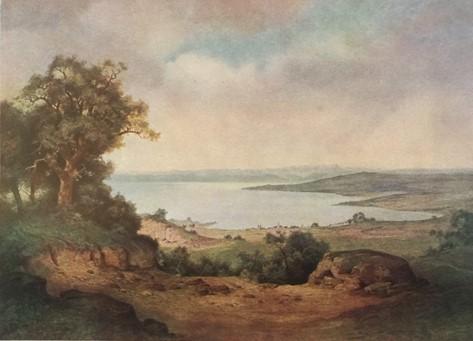 Adolf Hitler visiting the Grosse Deutsche Kunstausstellung 1938. Next to Hitler, Prof. Karl Kolb, director of the Haus der Deutschen Kunst, Adolf Ziegler, president of the Reichskammer of the visual arts and Heinrich Himmler. At the background ‘Meinlandschaft’ by Hermann Gradl (bought for 15.000 Reichsmark by Hitler). 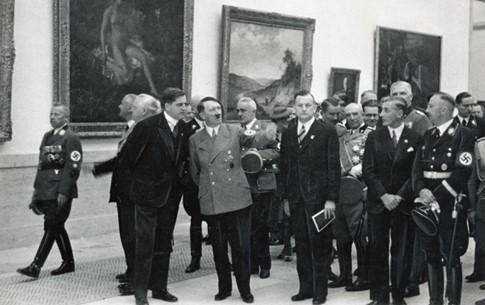 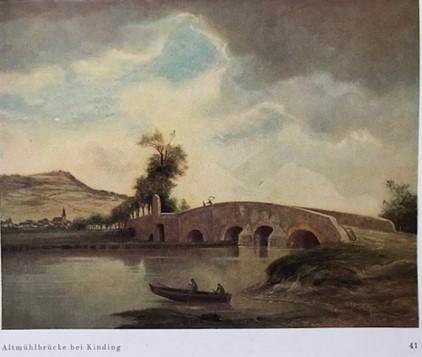 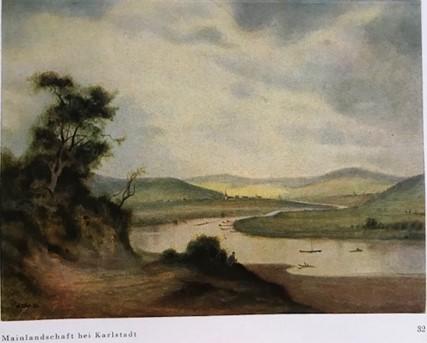 Hermann Göring Collection
Hermann Görings entire art collection comprised some 4,263 paintings, sculptures and tapestries. He planned to display them in the ‘Norddeutsche Galerie’, an art gallery which should be created after the war. The Norddeutsche Gallery was to be erected as an annex to Karinhall in the big forest of the Schorfheide, near Berlin. According to the website of the German Historical Museum, 5 works by Gradl were part of the collection. Göring bought two works in 1941 directly from the artist. One painting was a gift from the City of Fürth, and the other two were given by the Gauleiters of Danzig-West Prussia and Cologne.

Hermann Gradl in his atelier in the 1930s. 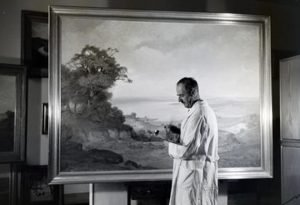 Left: Hermann Gradl, photo depicted on the newsite of the Main Echo, 14 February 2014.
Right: ‘Leader of the Academy Hermann Gradl, -Class of Landscape Painting’, by Georg Vogt. Vogt also created an oil portrait of Hermann Gradl, which hung in the GDK 1942 room 26. 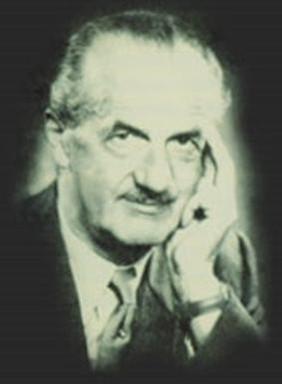 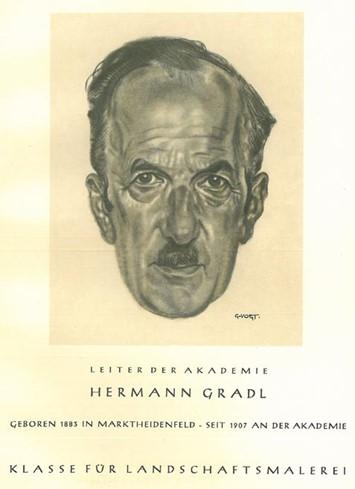 Hermann Gradl: Hitler’s favourite landscape painter
‘I will destroy the Bolshevik Art. You can trust my words in this Professor Gradl’ (Adolf Hitler).
Hermann Gradl (1883–1964), born in Marktheidenfeld as the sun of a lawyer, was a German painter and illustrator. In 1902 he went to the Münchner Kunstgewerbeschule (School of Arts and Crafts) where he studied Textile-design under Theodor Spiess. From 1926 onwards he taught at the Kunstgewerbeschule Nürnberg on the subject of weaving and ceramics. Like Hitler, he was not accepted at the Academy of Art. In the field of painting he was more or less an autodidact. With his first paintings he participated successfully at the exhibition of the Münchner Glaspalast in 1913/14. His success grew and a few years later he already belonged to the circle of popular new artists. With his romantic painting style his great breakthrough came when the National Socialists, who very much liked the Naturalists of the 19th century, came to power. They saw in Naturalism: ‘the typical appearance of the German Land, in its intertwining of Nature and Culture and its many different guises as Motherland of the German Nation’.
In 1934 Hermann Gradl became a member of the National Socialistic teachers’ organization (NSLB); in 1939 he was installed as Director of the Akademie der Bildenden Künste in der Stadt der Reichsparteitage Nürnberg. In 1941 he entered the NSDAP. In 1937 Adolf Hitler visited Gradl in his atelier very enthusiastic about the artist’s work. Hitler stated: ‘I will destroy the Bolshevik Art. You can trust my words in this Professor Gradl’. Later Hitler said several times at public occasions that Gradl was his favourite landscape painter, which inspired many highly positioned Nazi officers, among them Speer and Goebbels, to buy the paintings from Gradl. Hitler, who classified Gradl also as one of the 12 most important artists of the Third Reich (the Gotbegnadeten List), gave Gradl the order to paint six Monumental-paintings for the huge dining room of the Neuen Reichskanzlei in Berlin: ‘Hochgebirge’, ‘Bächlein’, ‘Seelandschaft’, ‘Flaches Land’ , ‘Mittelgebrige’ and ‘Flusslandschaft’. Gradl received for the idyllic landscapes, which hung in the dining room that was 48 metres long, 5 metres high and 10 metres wide, a sum of 120.000 Reichsmark, the equivalent of 100 Volkswagens.
In the GDK’s Gradl was represented with 40 works. Hitler bought 15 of his paintings and Joseph Goebbels 5, for prices of up to 25.000 RM. Four works by Gradl were displayed at the XXI Venice Biennale, 1938.
Five works by Gradl were part of the art collection of Hermann Göring and destinated for the ‘Norddeutsche Gallery’. In Eva Braun’s will, drawn up on October 26, 1944, we see that she also possessed paintings from Hermann Gradl.
After WWII, Gradl was during the Denazification classified as ‘Mitläufer’. In 1946 his Honorary Citizenship was reconformed by his birthtown Stadt Marktheidenfeld. In 1955, at the celebration of the 1100-year anniversary of Stadt Marktheidenfeld, an extensive Hermann Gradl exhibition was held in the former Bezirksamtgebäude, the birthhouse of Gradl.
Hermann Gradl died in 1964 in Nürnberg. He bequeathed his paintings collection to the city of Marktheidenfeld. After 1964 the Kulturzentrum Franck-Haus in Marktheidenfeld set up a Hermann Gradl-documentation centrum; since 2000 the Kulturzentrum houses a permanent exhibition about Gradl.
In 1983 at the occasion of his 100st birthday, his birthtown organized the exhibition ‘Hermann Gradl, -Marktheidenfeld seine Heimatstadt‘.