Perfect example of the ‘Blut und Boden’ style
This portrait is attributed to Josef Hengge. On the backside is signed an attached paper ‘JoHengge München 8.XI.37’. The style, technicality, quality and motif are exactly consistent with the other works of Josef Hengge (Hengge did not always sign his painitings).
The motifs of Hengge’s oil paintings were military officers (e.g., Ernst Udet, Generalluftzeugmeister during the Third Reich) and working people like farmers and woodcutters. Farmers were honoured in the Third Reich as the ‘Soldiers of the Soil’. The female farmer in this picture has an extraordinary dissipation; it almost looks like she is made of shining light. And, what we also see in the paintings of Leopold Schmutzler and Werner Peiner, the clothes of this female farmer are surprisingly clean. She looks, after a day of honourable work on the land, satisfied and fulfilled. This female farmer, shining like a star, is a perfect example of Blut und Boden art.

Josef Hengge. War memorial Berchtesgaden 1929
The war memorial in Berchtesgaden of 1929 is painted above the arcades in the palace square near the Rathaus. In the 1929 photo (on top), notice how the depiction on the right shows a Wehrmacht soldier with hand grenades, triumphing over fallen Russian soldiers in winter suits. Pursuant to an order by the U.S. military authorities to destroy all Nazi symbols, Hengge’s vignettes were painted over. However, Hengge himself repainted the memorial in 1952, changing only the right-hand scene, and adding the dates for World War 2 (photo below: situation in 2013).
The 1929-photo is published in the book ‘Deutscher Ehrenhain, für die Helden von 1914/18’.

The text below the 1929 photo explains the scenes (from left to right):
1. Sturmangriff (Assault)
2. Abschied von der Heimat (Farewell to the Fatherland)
3. Gott mit uns (God with us)
4. Heimkehr (Homecoming)
5. Grabenkampf (Trench warfare) 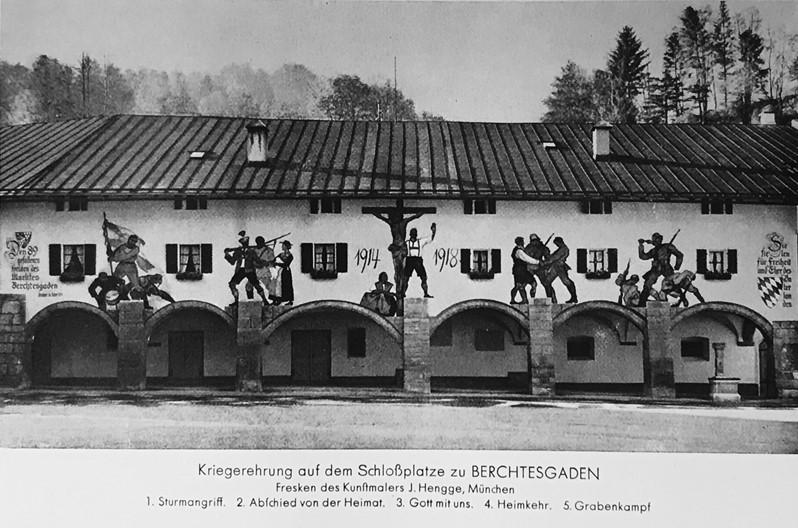 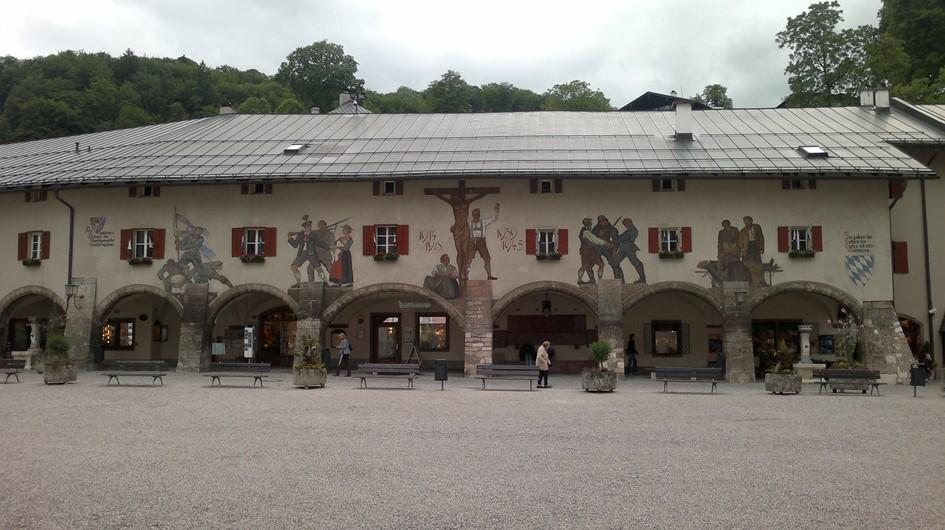 Left: Josef Hengge, ‘General Dietl’, GDK 1941, room 17; depicted in the exhibition catalogue. Bought by Hitler for 3.000 RM. Also depicted in ‘Die Kunst’, 1942. This painting is in the possession of the Library of Congress, Washington DC (according to US law it falls withing the public domain, including the copyrights).
Right: Josef Hengge, ‘Portrait of Generalluftzeugmeister Ernst Udet’ with the Knight’s Cross, Iron Cross and Pour le Mérite around his neck. Colonel General Ernst Udet was with 62 aerial victories the second-highest scoring German flying ace of WWI. In 1933, he joined the Nazi Party and by 1939 Udet had risen to the post of Director-General of Equipment for the Luftwaffe. In 1941 he committed suicide by shooting himself in the head. 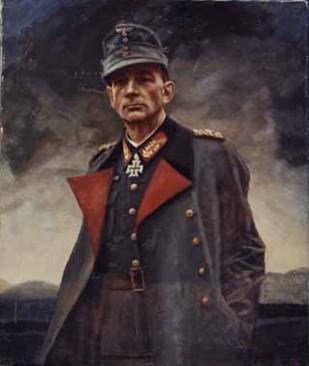 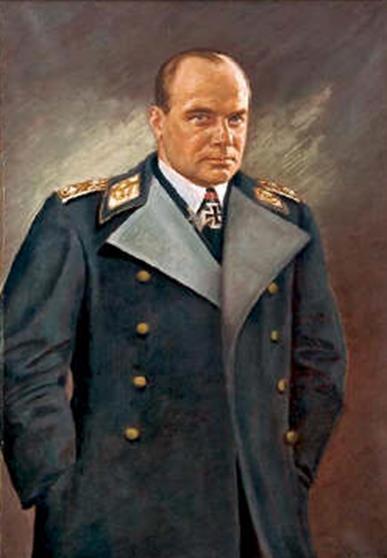 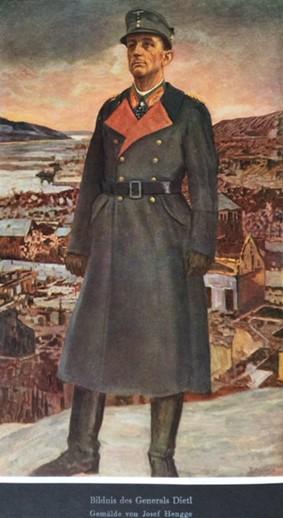 Josef Hengge, fresco on the facade of the Old Town Hall in Passau, created 1922. Depicted are (left to right): Ludwig I of Bavaria, Bernhard von Prambach, Albert of Saxe-Wittenberg, Ruprecht von Berg and Ludwig of Brandenburg. Foto: 2015.

Josef Henge, fresco at the facade of the Old Town Hall of Bad Reichenhall, 1924. Depicted are (left to right): Charles the Great, St. Rupert,  Frederick Barbarossa, Ludwig I of Bavaria, Charity and Justice. 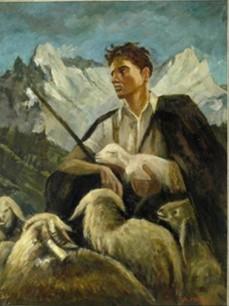 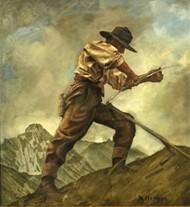 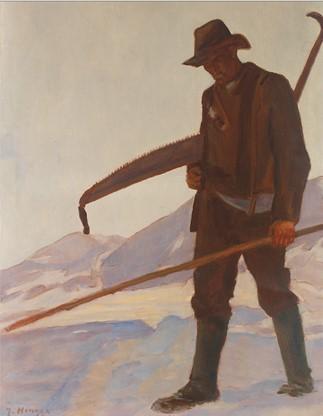 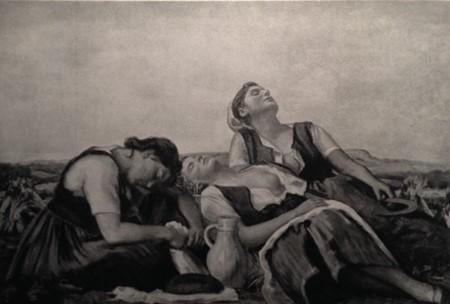 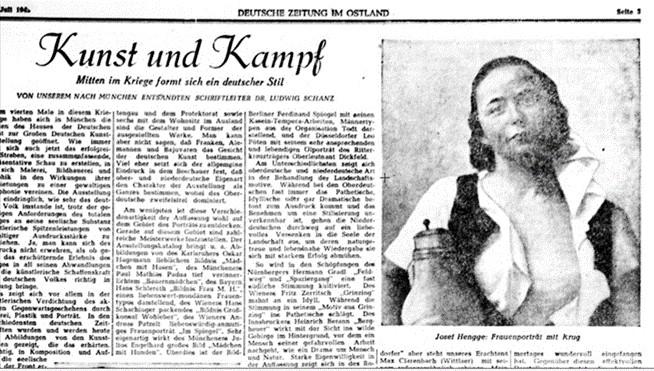 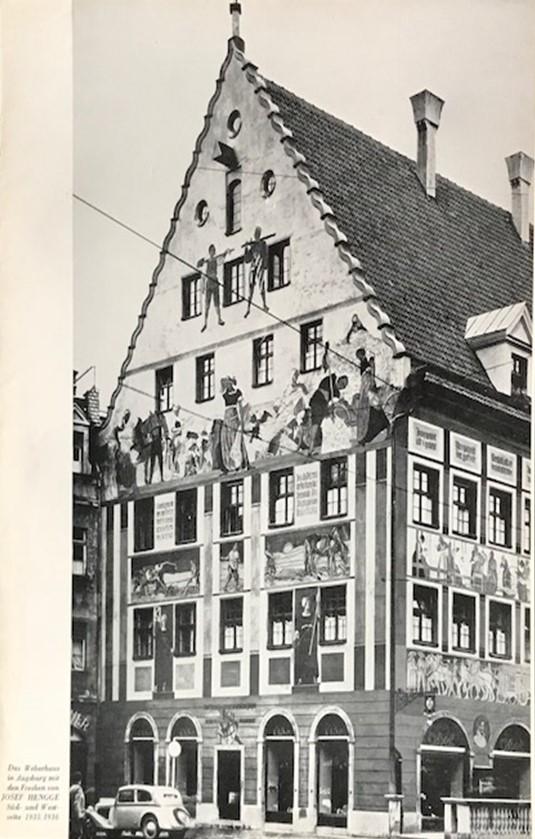 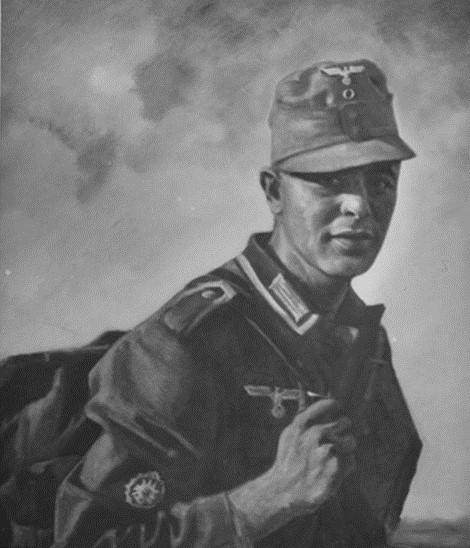 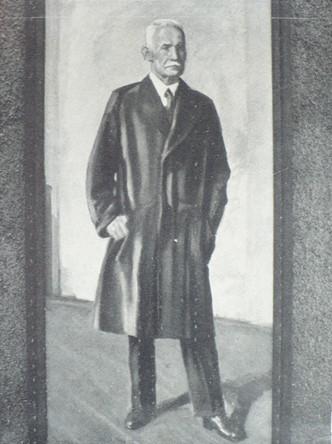 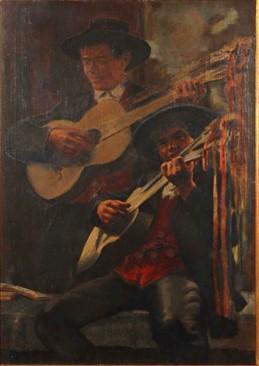 Left: Josef Hengge, ‘Holzer im Allgäu‘ (‘Woodworkers in the Allgäu‘). Displayed at the Grosse Münchener Kunstausstellung in the Glaspalast, 1931. An almost indentical work named ‘Allgäuer Holzer’ was later displayed at the GDK 1943, room 16, and bought for 4.500 RM by the City of Munich.
Right: ‘Enzianpflückerin auf eine Bergwiese’ (‘Girl picking Enzian-flowers’). Sold in 2015. 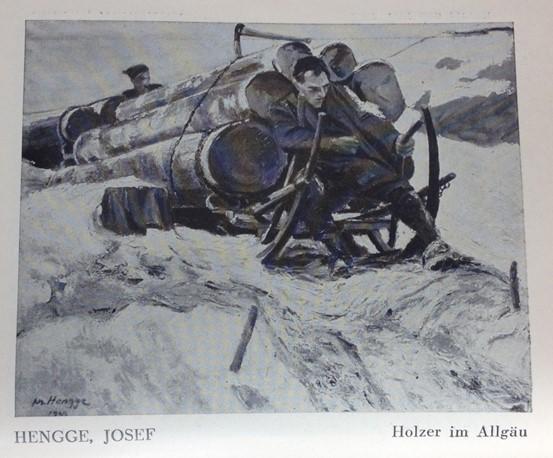 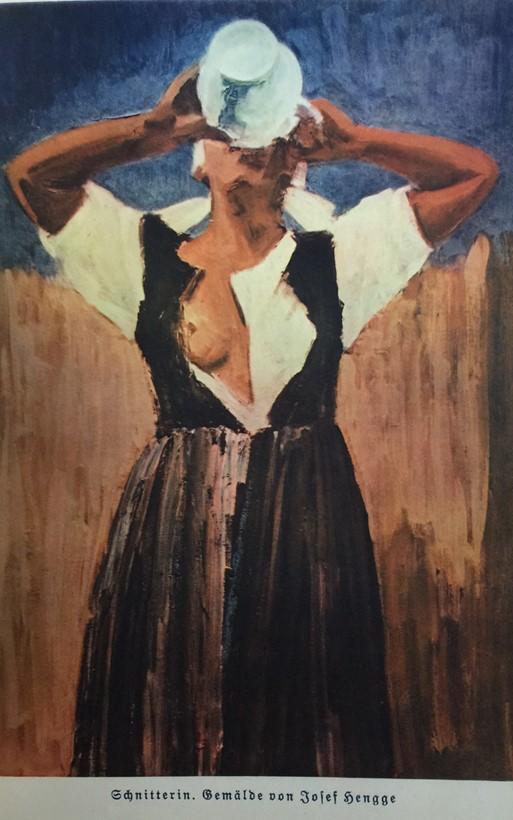 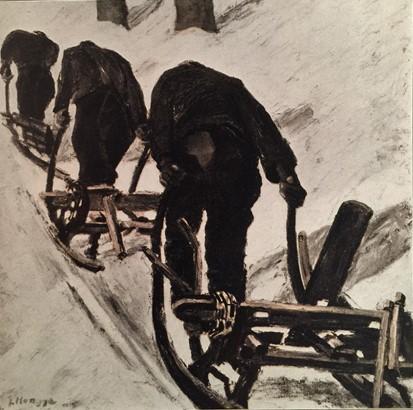 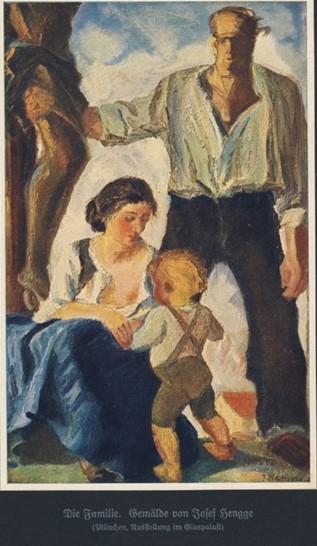 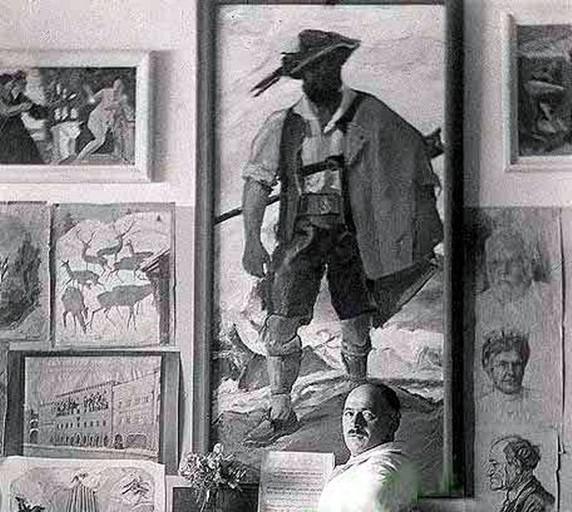 Josef Hengge
Josef Hengge (1890 – 1970) born in Kempten, was an Allgäuer painter. In 1904 he started an apprenticeship at the church-painter Haug, in Ottobeuren; from 1908 to 1913 he went to the Städtische Gewergebschule and to the Königliche Kunstgewerbeschule in Munich. In 1915, during the First World War, corporal Hengge was seriously wounded in Arras. With the help of König Ludwig III, the last King of Bavaria, he went to the Akademie der bildenden Künste in Munich in 1918 (Hengge had good contacts with the Bavarian Royal Family, especially with Crown Prince Rupprecht). Franz von Stuck and Angelo Jank became his teachers. Even as a young artist, after he settled in Munich, he received many awards.
Hengge’s style could be described as strong realism from the 1920s and 1930s. Art critics called him the ‘Egger-Lienz’ from the Allgäu. He painted frescos (his great passion) and oil paintings depicting military leaders, labourers such as farmers and woodcutters, and the Royal Family of Bavaria. Hengge frequently displayed his works at the Grosse Münchener Kunstausstellung in the Glaspalast. At a relatively very young age he was asked to join the jury of the exhibitions in the Münchener Glaspalast.
In 1922 Hengge created a fresco for the town hall of Passau. After that, many more frescos would follow, including for the town hall in Reichenhall (1924), the Church of St. Joachim in Munich, the Catholic church in Kottern, near Kempten, the war memorials in Pasing and Durlach, the Weberhaus in Augsburg (1936), and three large frescos for the railroad station in Kempten. Most of these works were destroyed in bomb attacks or were purposely destroyed after the war.
However, in 1929 Hengge was commissioned to create a fresco for a World War I memorial at the Schlossplatz in Berchtesgaden. Pursuant to an order by the U.S. military authorities to destroy all Nazi symbols, in 1945 Hengge’s Berchtesgaden fresco was painted over. But in 1952 Hengge himself repainted this memorial. However, he did change the right-hand scene of the fresco: a Wehrmacht soldier with hand grenades, triumphing over fallen Russian soldiers in winter suits, disappeared.
Josef Hengge had 14 works displayed at the GDKs, including the portrait of General Dietl (GDK 1941, room 17), which was bought by Adolf Hitler for 3,000 RM. This painting is in the possession of the Library of Congress, Washington D.C. Another famous painting by Josef Hengge was ‘Portrait of Generalluftzeugmeister Ernst Udet’, who is depicted with the Knight’s Cross, Iron Cross and Pour le Mérite around his neck.
Hengge lived in Munich until his house was bombed in 1945. He fled to Wertach and returned to Kempten in 1950.
Josef Hengge died in 1970 in his birthplace, Kempten.
In1960, at the occasion of his 70th birthday, the City of Kempten organized an exhibition of Josef Hengge’s work. Two other exhibitions in 1991 and 2000 in the City Hall of Wertach followed.
In 2015, at the occasion of Hengge’s 125th birthday, an exhibition (‘Sonderausstellung zum 125. Geburtstag des Malers Josef Hengge’) was organized in the Wertacher Heimatsmuseum.