An identical bust of Generalfeldmarshall Göring by Nicolaus Wendelin Schmidt was exhibited at the Great German Art Exhibition in the Haus der Deutschen Kunst 1938, room 10. According to the files of the Haus der Deutsche Kunst, one Göring bust by Wendelin Schmidt  was bought at the GDK by the city of Berlin and another by Lufgaukommando VII in Munich (for 500 Reichsmark each). As the previous seller of this bust lived in the Berlin region (and busts by Schmidt are rare), the bust we are offering could have been the one in possession of the city of Berlin.

Wendelin Schmidt also displayed a Göring bust at the ‘Ausstellung Kleine Kollektionen’, organized by the Verein Berliner Künstler, 1941, and at the exhibition ‘Malerei Graphik Plastik’, in the Berliner Kunsthalle, 6 December 1941 – 31 January 1942. 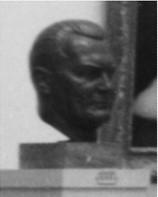 At the base the foundry mark ‘Guss M Sperlich’ (see below). 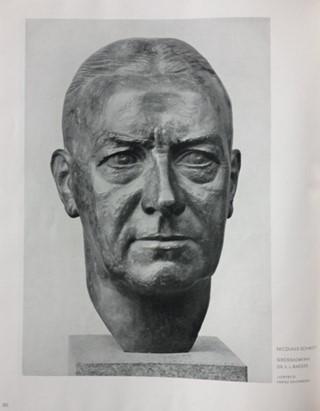 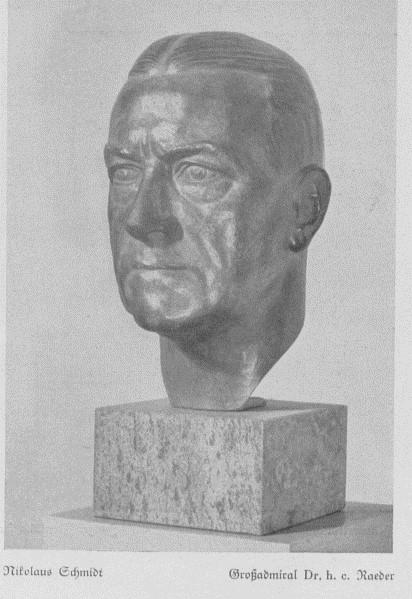 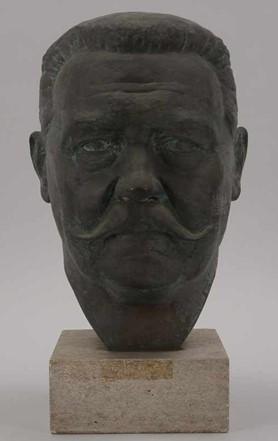 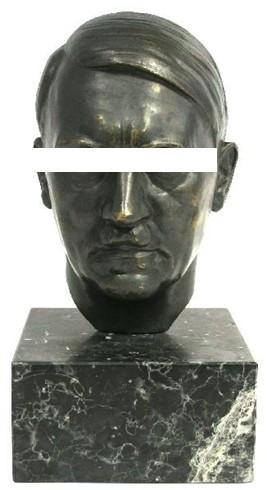 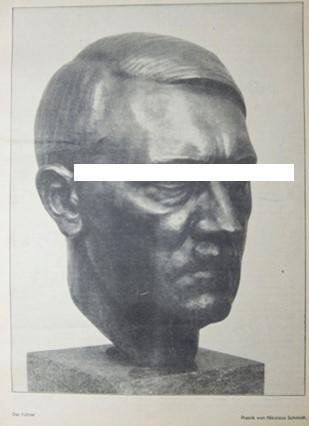 Left: Nicolaus Wendelin Schmidt, ‘Bust of Anny Gouthier. ‘Depicted in ‘Velhagen & Klasings’, Monatshefte, 1933/34.
Anny Gouthier was a pupil of Schmidt and later became his colleague. She started her career as vocalist and violinist. Later, in the 1930s, she found her final occupation as a dancer.
Right: Nicoalaus Wendelin Schmidt, ‘Salome’, postcard (before 1916). This depiction is probably inspired by the extremely successful opera ‘Salome’ by Richard Straus in 1905: ‘Herod begs Salome to dance for him (Tanz für mich, Salome). He promises to reward her with her heart’s desire. Salome dances the “Dance of the Seven Veils” and then demands the head of John the Baptist on a silver platter. When Salome receives the head, she declares her love for it, finally kissing the prophet’s lips passionately. Disgusted, the terrified and superstitious Herod then orders his soldiers to kill Salome.’ 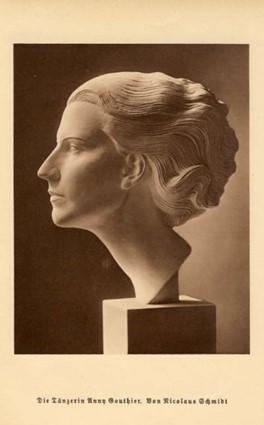 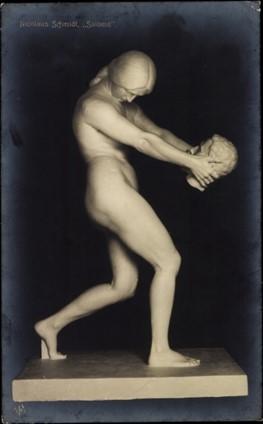 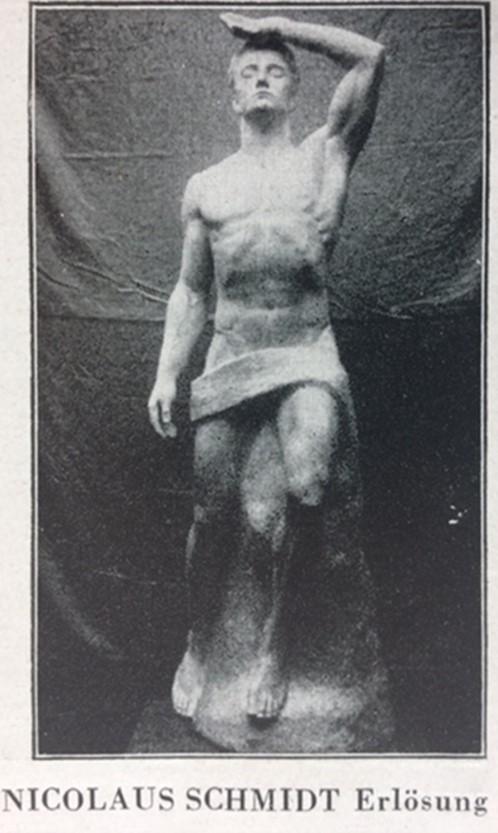 Left: Nicolaus Wendelin Schmidt, ‘Schreitendes Mädchen’. 1.67 cm high, bronze. GDK 1937, room 22.
After WWI it was placed in the garden of Bellevue Palace (Schloss Bellevue), located in Berlin’s Tiergarten district. Bellevue Palace served as the secondary residence of the West German president Theodor Heuss, the first President of the Federal Republic of Germany after World War II from 1949 to 1959. In 1994, after the German reunification, President Richard von Weizsäcker made it his primary residence.
Right: Nicolaus Wendelin Schmidt, ‘Eva’, bronze. Exhibition of ‘Verein Berliner Künstler’, 1939 (‘Berlin Artist Association’). Depicted in ‘Westermanns Monatshefte’, 1939 and in ‘Velhagen & Klasings’, Monatshefte, 1939.
A plaster cast (Hartgips) of ‘Eva’ was displayed at the ‘Ausstellung Kleine Kollektionen’, organized by the Verein Berliner Künstler, 1941. 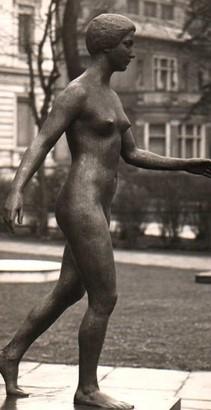 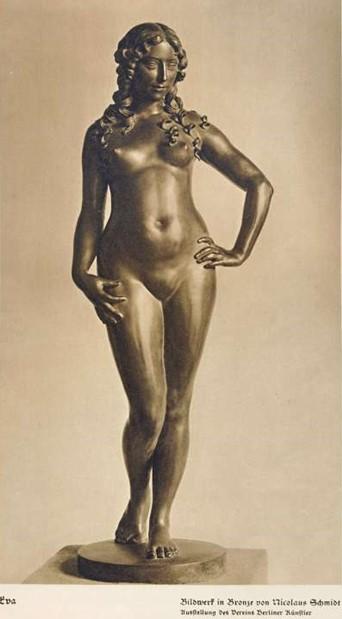 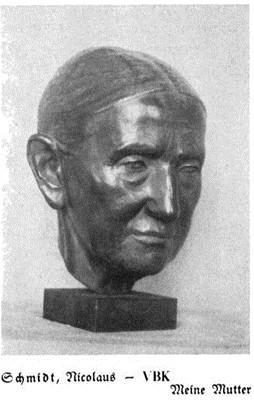 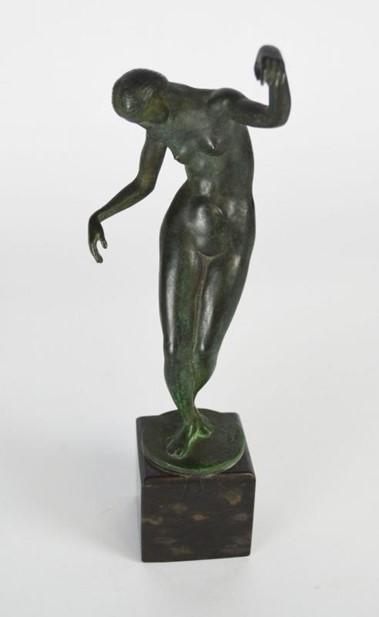 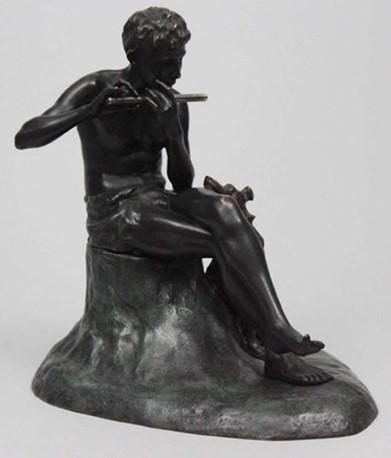 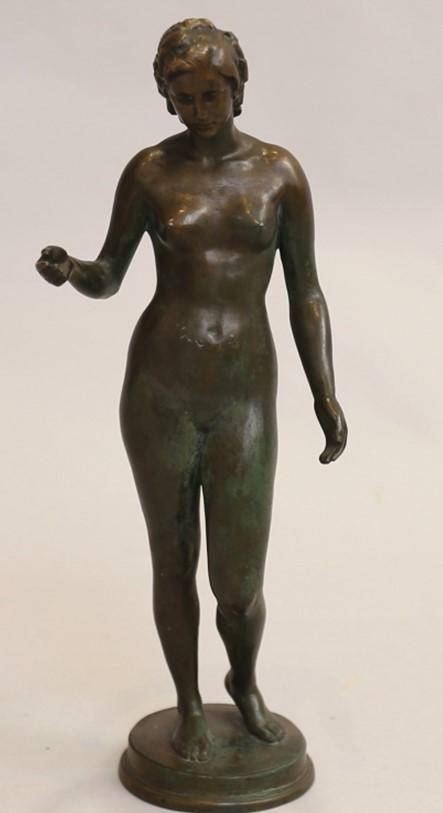 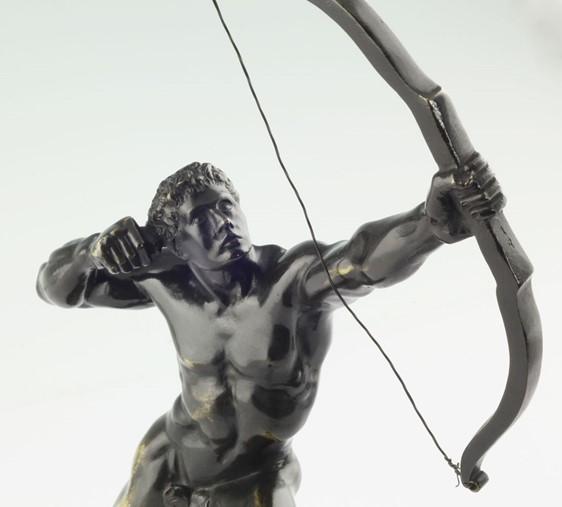 Guss M. Sperlich/ Foundry Sperlich
The sculpture of Hermann Göring by Nicolaus Wendelin Schmidt bears the mark of Foundry Sperlich, a company founded in 1905 in Berlin by Max Sperlich. For the German foundry industry, the 1930s were a prosperous time; many monumental sculptures were needed for the newly designed capital Berlin (‘Haubstadt Germania’), the New Chancellery and the Olympic Games in 1936. Foundry Sperlich received a significant number of orders, including those from Arno Breker, for the sculptures Siegerin’ (‘The Victress’) and ‘Zehnkämpfer’(‘Decathlete’), meant for the Olympic Stadium in Berlin (where they still are). Guss Sperlich also casted the famous 5.5 meter- high sculptures by Josef Thorak, ‘Familie’(‘Family’) and ‘Kameraden’(‘Comrades’) for the German Pavilion at the 1937 World Exhibition in Paris (in 1949 Thorak had them melted down again). ‘Reiterstandbild’ (‘The Rider’), designed by Professor Emil Cauer in 1928 as a monument for the ‘Garde du Corps’ in Potsdam, was also cast by Sperlich. Unfortunately, this sculpture was melted down in 1944, because the German war industry needed the bronze. At the end of 1943 the Sperlich foundry in Berlin was bombed. A second production facility was created in Birkholzaue, just outside Berlin. Foundry M. Sperlich still exists. In 2014 the company, which is also a part of the machine-, electronics- and automotive industry, has more than 120 employers.

Nicolaus Wendelin Schmidt
Nikolaus Wendelin Schmidt (1883–1954) born in Mühlheim am Main, was a German sculptor, sketsch artist and lithographer. He studied with Professors Breuer and Janensch at the ‘Königlich akademischen Hochschule’ for Fine Arts. In 1913 he was awarded the Rompreis with gave him the financial ability to travel for a year through France and Italy (The ‘Prix de Rome’ was given by the Académie des Beaux-Arts in Paris; the first one was granted in the 17th century). Schmidt was represented at several exhibitions, including the Grosse Berliner Kunstausstellungen (i.a. 1916, 1926, 1928, 1930 and 1933), and exhibitions organised by the ‘Verein Berliner Künstler’ (i.a. 1938 and in 1941 with 7 works, inclusing busts of Hitler, Göring and Grossadmiral Raeder). In 1937 and in 1938 he was represented at the exhibition ‘Kunstausstellung Hilfswerk für Deutsche Bildende Kunst in der NS-Volkswohlfahrt’, Berlin. In May/June 1941 he took part in the exhibition ‘100 Jahre Verein Berliner Künstler’, Berlin, and in the ‘Ausstellung Kleine Kollektionen’, organized by the Verein Berliner Künstler. Towards the end of 1941 he was represented at the exhibition ‘Malerei Graphik Plastik’, in the Berliner Kunsthalle, 6 December 1941 – 31 January 1942.
Schmidt was married to the artist Johanna Helene Charlotte Schröder (also named Hannes Petersen); from 1937 to 1944 they lived in Berlin.
Schmidt’s specialties were bronze busts and life-size sculptures. He was represented with five works in the Great German Art Exhibitions in Munich: ‘Generalfeldmarshall Göring’, ‘Meine Mutter’, ‘Grossadmiral Dr. h.c. Raeder’ (2 x) and ‘Schreitendes Mädchen’. According to the files of the Haus der Kunst, two busts of Göring were bought by the City of Berlin and Lufgaukommando VII in Munich, for 500 RM each. Nicolaus Wendelin Schmidt died in 1954 in Berlin.
Nowadays works of Nicolaus Wendelin Schmidt are in museums in Berlin and in private hands. The zinc bust of Grossadmiral Räder is in the possession of the Bayerische Staatsgemäldesammlungen. It was displayed at the exhibition ‘Kunst im 3. Reich, Dokumente der Unterwerfung’. The exhibition, instigated by the Frankfurter Kunstverein, was held from 1974 to 1975 in Frankfurt, Hamburg, Stuttgart, Ludwigshafen and Wuppertal.