– THIS OBJECT IS STOLEN –

It disapeared during transport by DPD in April 2014 (location Hilversum, The Netherlands).
We are offering a 2.000 Euro reward for anyone with information leading to the return of the stolen artwork.

The sculpture is registered as ‘Stolen’ in Dutch and international Lost Art databases.

‘Der Sieger’ (‘The Victor’), original bronze cast. A large plaster cast of Der Sieger was displayed at the Great German Art Exhibition in 1937, room 2.
The idolizing ideas of the body and the Aryan race together are particularly seen in Obermaier’s model of The Victor, who is presenting an oak twig to the winner of a contest. 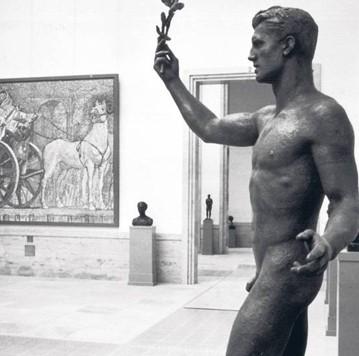 Ottmar Obermaier, ‘Der Fechter’ (‘The Fencer’). Allach porcelain desigened by Obermaier. An example of an Allach figure ‘Der Fechter, is portrayed in the background of this painting (left) by Josef Vietze, displayed at the GDK 1941. The painting is in the possession of the US Army Center of Military History, Washington. Depicted is SS-Gruppenführer Reinhard Heydrich, who was a fanatic fencer himself. In the SS, sports and being able-bodied were rather popular as they were preparation for the fight. Also depicted in ‘Das Bild’, 1941. 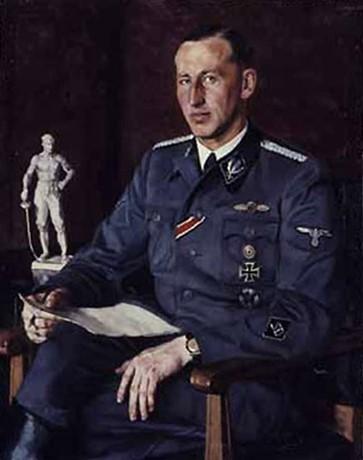 Ottmar Obermaier, ‘Der Fencer’, executed in bronze. Height including base: 45 cm. Bronze version of the famous figure by the Allach Porcelain Manufactory.
This bronze version was presented by Heydrich himself in 1937 to the best fencer in Germany. Later owned by Franz Nagy (1888 – 1959), one of the first directors of the Allach Porcelain Manufactory (Nagy also owned the ‘Victor’ in bronze). Sold by a German auction house in 2008. 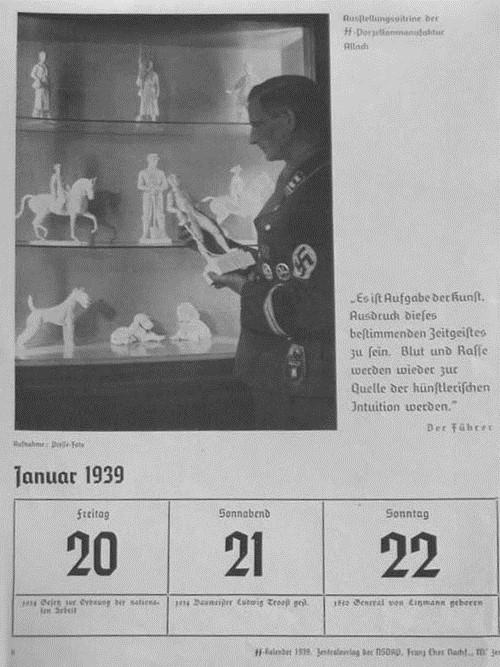 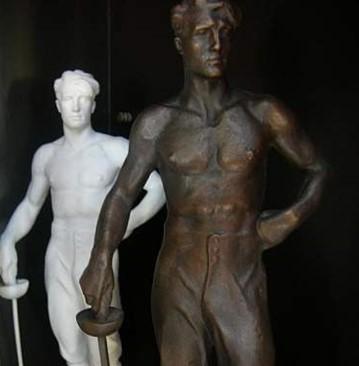 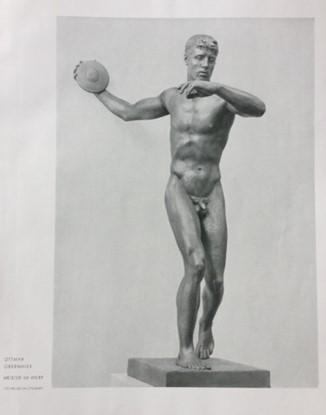 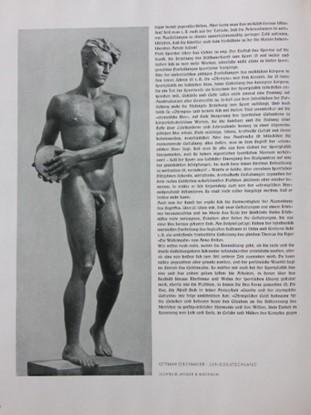 Left: Ottmar Obermaier, ‘Schreitendes Mädchen’ (‘Striding Girl’), Allach porcelain, made in 1931. It evokes both the physical strength and beauty of the German female while harkening back to the Greek ideal.
Right: The original bronze cast was exhibited in the GDK 1939, room 2. Nowadays the original ‘Schreitendes Mädchen’ is on the grounds of the Nordbad, a swimming pool in Munich. 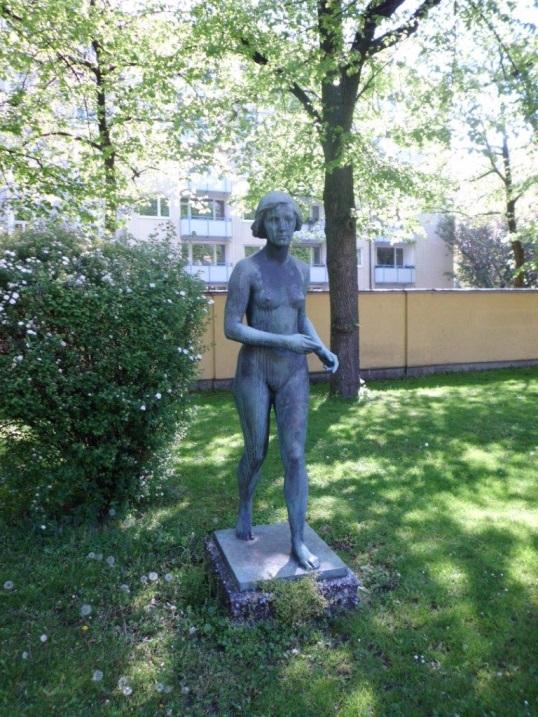 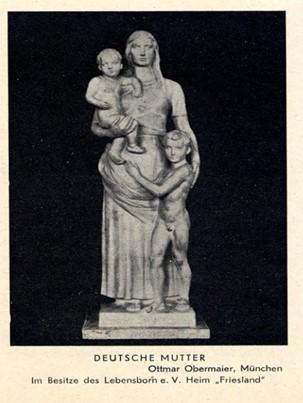 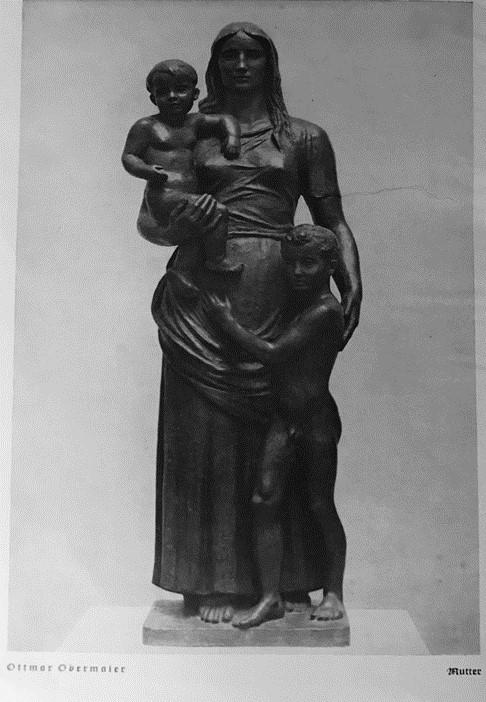 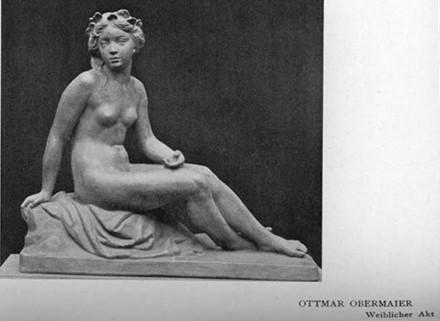 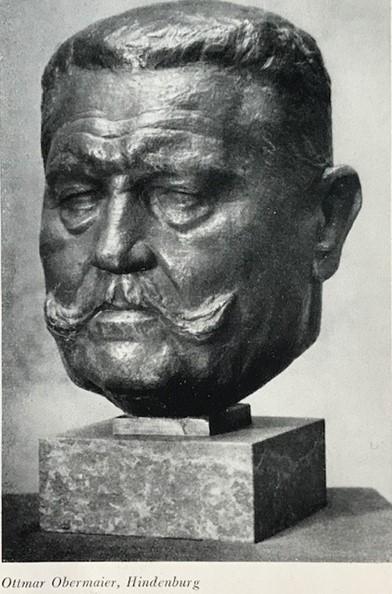 Allach porcelain
The Allach porcelain manufactory was established in 1935 by Master of ceramics Franz Nagy and his business partner, the porcelain artist Prof. Karl Diebitsch Obersturmbannführer in the Waffen-SS). In 1936 the factory, which was based in the small town of Allach, near Munich, was acquired by Heinrich Himmler, the leader of the SS. The acquisition of a fine porcelain factory was a way to establish an industrial base for the production of works of art that would be representative of the truly Germanic culture. The emphasis was on decorative ceramics. The company logo included stylized SS runes. High-ranking artists were locked into contract: Karl Diebitsch, Prof. Theodor Kärner, Richard Förster, Ottmar Obermaier, Prof. Benno von Arndt, Prof. Wilhelm Krieger, Prof. Willy Zügel, Adolf Röhrig, Wilhelm Neuhäuser and others. The product range of the factory included over 240 porcelain and ceramic models. The quality of the porcelain pieces produced at Allach was extraordinary. As output at the Allach factory increased, the Nazis moved production to a new facility near the Dachau concentration camp. The factory made use of a pool of slave labour provided by the Dachau camp. According to the US military doctor and writer, Marcus J. Smith, the Allach camp, which was in fact a sub-camp of the Dachau camp, had 9,000 prisoners who worked on the production lines of companies like BMW, Dyckerhoff, the Organisation Todt and the Allach organization. The fall of the Third Reich brought an end to the Allach company; the factories were shut down in 1945 and never reopened.

Art competitions at the Olympic Games
The Olympic Games during its early years, from 1912 to 1948, included art competitions in addition to the athletic contests. Bronze, Silver and Gold medals were awarded for exhibits of town planning, architecture, drama, poetry, music, graphic arts and paintings as well as sculpture, reliefs and medallions. All of the entered works had to be inspired by sport, and had to be original and not previously published.
The competitions were part of the original intention of the Olympic Movement’s founder, Pierre de Frédy, Baron de Coubertin, who believed that sports and the arts were inextricably linked.
The juried art competitions were abandoned in 1954 mainly because of the idea that artists were considered to be professionals, while Olympic athletes were required to be amateurs (however, the athletic events would later radically evolve to accommodate professional athletes).
Also, a continuing subject of discussion and debate was the fact that sporting achievements can be measured in easily-understood metrics such as time and distance, but judging the arts is undeniably subjective. Finally the arts competition suffered from the guiding parameter that the works created had to be associated with sport, limiting the entries to tiresome imagery of athletes and odes to sporting achievement.

The 1936 Summer Games in Berlin, best-documented Olympic Art Competition
At the opening ceremony of 1936 Olympic Art Competition, Reich Minister of Propaganda Joseph Goebbels reminded his audience that each work entered in the competition was required to have been created within the last four years. This restriction, he declared, ‘enables us to derive from the Exhibition an estimate of international conditions.’
The detailed descriptions in the Official Report of the 11th Olympic Games not only provided a dazzling depiction of this charmingly peculiar Olympic-art phenomenon, but also a chilling snapshot of Germany during the emergence of the Third Reich. Home-field advantage greatly worked in Germany’s favor that year; the international jury consisted of 29 German judges and 12 from other European countries. It was also a welcome, if not surprising, spike in gold medals for the German artists, who won five of the nine gold medals awarded that year. Charles Downing Lay was the only American to win a medal in 1936, taking home silver in the Architecture category. The German brothers Werner and Walter March took home gold in that category for their design ‘Reich Sport Field.’
The 1936 art competition was one of the most successful on record. More than 70,000 people visited the accompanying exhibition over the course of its four weeks on display. Prominents like the Reich Ministers Frick, Goebbels, and Rust, the Italian Minister of Education, and the Baron Morimoura of Japan all purchased works from the exhibition.

Ottmar Obermaier
Ottmar Obermaier (1883–1965) was born in Inzzell, Bavaria. In 1907 he went to Akademie der Bildende Kunsten in Munich, where he studied under Professor Erwin Kurz, who at that time was a famous teacher and sculptor of statues. Obermaier’s works were frequently displayed in the Glaspalast in Munich. From 1923 on he worked as a designer for Rosenthal Porcelain. Rosenthal hired Obermaier to design idealized human forms based on Greek and Roman classics for production. These figures, most displaying physical prowess and athletic pursuits, have titles such as Discus Thrower, Victor, and Striding Woman. Ottmar Obermaier represented Germany in 1928 at the Amsterdam Olympics. While Obermaier did not medal in the 1928 Olympics, he continued to design for Rosenthal until the mid-1930s. After 1936 he also worked as a designer for the Allach porcelain manufactory. Obermaier was represented in the Great German Art Exhibitions with 13 works, of which two were bought by Hitler. His most well known sculptures were ‘Deutsche Mutter’, ‘Der Sieger’, ‘Die Siegerin’, ‘Meister im Wurf’, ‘Schreitendes’ and ‘Jung Deutschland’.
Obermaier died in 1965 in Munich.