Waisa is in the neighbourhood of Eisfeld (near Frankfurt and Nürnberg), the birthplace of Otto Bloss. Date of creation: 6 October 1944. 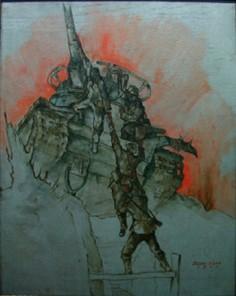 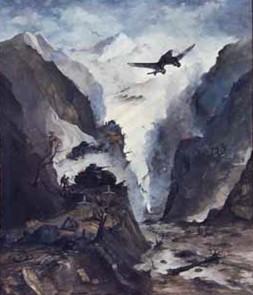 Left: Otto Bloss, Infanteriespitze (infantry troops)
Right:  Otto Bloss, postcard. Geschutzexerzieren am Atlantik (artillery exercises by the Atlantic)
Neither of these works is in our gallery 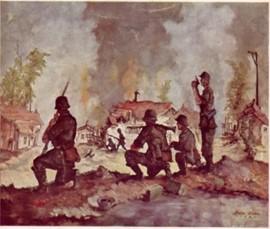 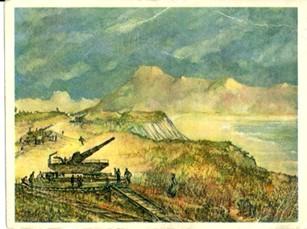 German painter Otto Bloss (1898–1963), born in Eisfeld, studied at the Kunstgewerbeschule in Berlin. He painted landscapes, cities and war scenes. From 1932 on Otto Bloss was also a doctor of philosophy and he taught in Jena at the Friedrich-Schiller University. From 1937 to 1944 he lived in Eisfeld. In 1941 he became Oberleutnant of a Propaganda Kompangie (PK 666), first stationed in Russia. He was a member of the “Staffel der bildenden Künstler”, an elite unit from the Wehrmacht with around 80 painters. Their work was pure propaganda; enemies were stigmatised and the German soldiers were depicted as heroes. Dead bodies and massacres were not shown. The war was more or less depicted as wellness trip or an exciting adventure. Well-known members of this Staffel were Wolfgang Willrich, Franz Eichhorst and Rudolf Lipus.
Bloss was represented in the Great German Art Exhibitions with 17 works, all depicting German landscapes and war scenes.