Ria Picco-Rückert, ‘Reichswerke Hermann Göring-Hochofen mit Erzbahn’
Depicted is a blast furnace (one in a row of 8) and iron-ore railway in the City of Salzgitter.
Created 1940. Large size.
In 1940 Ria Picco-Rückert created more then ten paintings, all of them depicting the Salzgitter complex. Seven of them were displayed at the GDK’s. 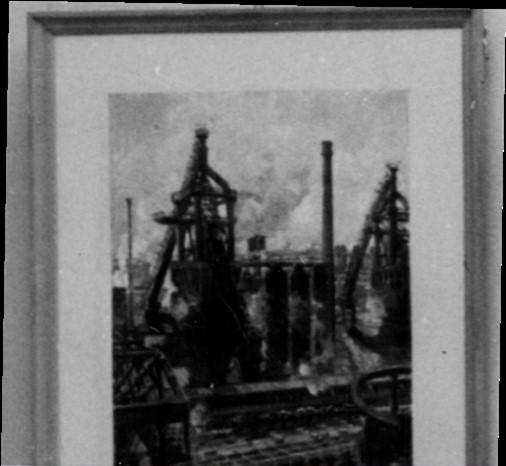 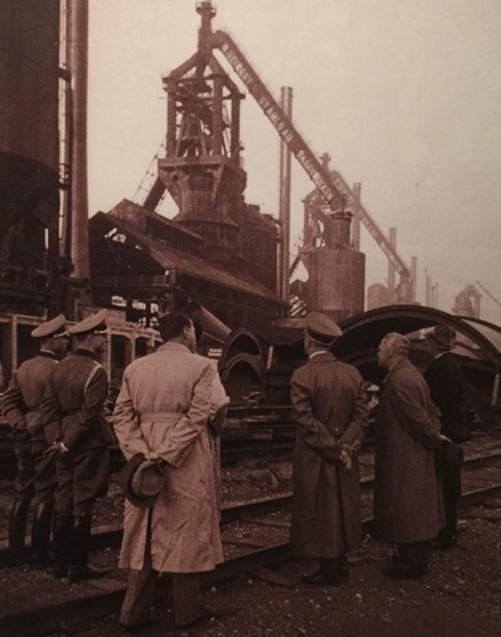 The state owned ‘Reichswerke Hermann Göring’ was an industrial conglomerate established in July 1937 to extract and process domestic iron ores from Salzgitter (domestic ore, iron and steel program had become a national priority). In November 1937 Hermann Göring obtained unchecked access to state financing and launched a chain of mergers, diversifying into military industries with the absorption of Rheinmetall. After the Anschluss the Reichswerke absorbed Austrian heavy industries, the cluster of steel mills and supporting companies in Linz became its most important asset. After the German occupation of Czechoslovakia the Reichswerke absorbed between 50 and 60 per cent of Czech heavy industries. The pattern was repeated in occupied Poland, France and the Soviet Union. The Reichswerke operated captured assets as far from its base as Liepāja in Latvia and Donetsk in Eastern Ukraine. It provided one-eighth of German steel output during World War II. By the end of 1941 the Reichswerke became the largest company in Europe and probably in the whole world, with a capital of 2.4 billion reichsmarks and about half a million workers.
The conglomerate was dismembered by the Allies in 1944–1945, but the Salzgitter plant continued operations as Reichswerke until 1953. The Reichswerke logo, which resembled Göring’s coat of arms, remained in use by Peine+Salzgitter until the middle of the 1980s. 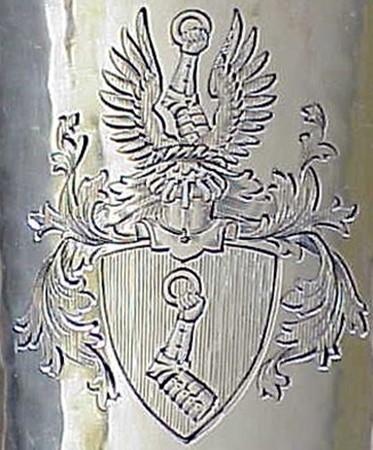 Metal beam produced by the Reichswerke Hermann Göring (HG) in Salzgitter; remains of the ‘Truppenmannschaftsbunker 750’, once located at the Hannoverschen Straße in the city of Wilhelmshaven. Photo 2012. 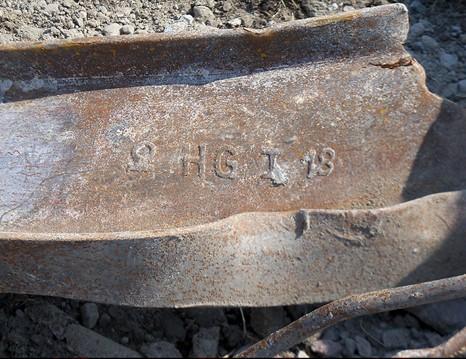 July 23, 1937 Göring announced that the Reichswerke would begin mining and processing Salzgitter ores. It produced its first pig iron in October 1939 (and its first steel in August 1940).
The majority of Salzgitter area staff, 47,000 workers, were non-Germans. Housing was not sufficient even for native Germans. The Gestapo ran an on-site correctional camp for the delinquent workers. Forced labor of concentration camp prisoners was not employed until May 1944. Salzgitter was the target of Allied bombings several times but damage to the plant was insignificant. Its blast furnaces operated until captured by the Americans in April 1945. 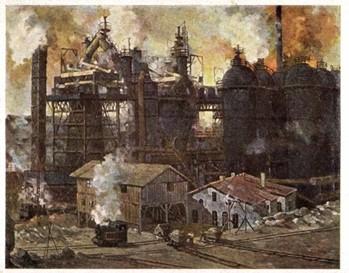 Left: Ria Picco-Rückert, art print, ‘Im Schacht des Panzers Johanna’. Depicted is the first Armoured Face Conveyer (coal mining equipment), invented in 1942 and for the first time in use in the Johanna coal mine in Poland. GDK 1943, room 12. Bought by Joseph Goebbels for 5.000 RM. A litho is in the possession of the ‘Bergbaumuseum Bochum’.
Right: ‘Im Schlacht des panzer Johanna’ at the GDK 1943. 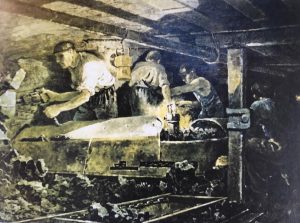 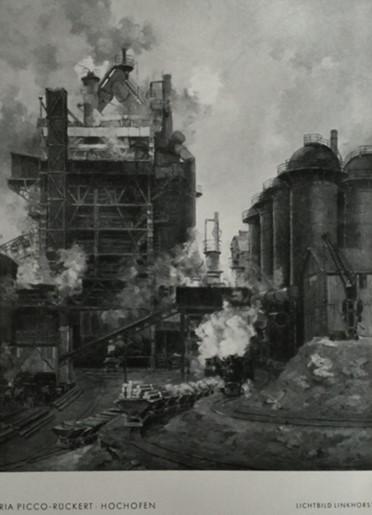 Ria Picco-Rückert, ‘Vereinigte Kraft’ (‘United Power’). GDK 1944 room 15. Size 230 x 190 cm. Bought for 8.000 Reichsmark by Joseph Goebbels. In the possesion of the Beyerische Staatsgemäldesammlungen. Displayed at the exhibition ‘Kunst im 3. Reich, Dokumente der Unterwerfung’. The exhibition, instigated by the Frankfurter Kunstverein, was held from 1974 to 1975 in Frankfurt, Hamburg, Stuttgart, Ludwigshafen and Wuppertal; ‘Vereinigte Kraft‘ was depicted in the official exhibition catalogue. 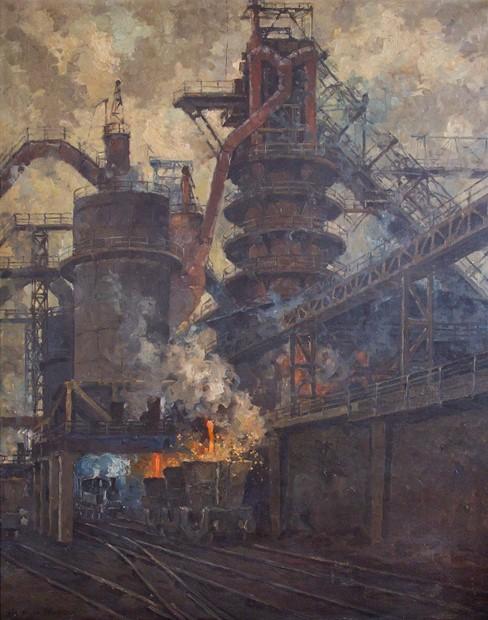 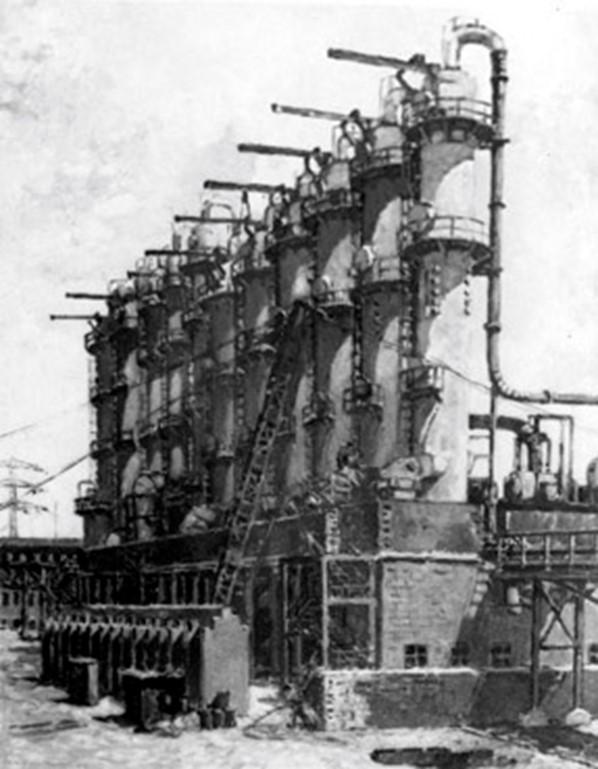 Ria Picco-Rückert, ‘Im Thomasstahlwerk. Rombacher Hütte, Lotharingen’, 1943. Depicted is the Rombacher Hütte in Rombas, Lotharingen (between Metz and Thionville). The Hütte was taken over by the Flick-concern in WWII. Later it became part of the French USINOR group.  Size 150 x 120 cm. Offered by a German auction house in 2020. The painting is depicted in black and white in ‘Kohle und Stahl, Leben und Werk der Industriemalerin Ria Picco-Rückert’ by Klaus Ollinger, 2007. 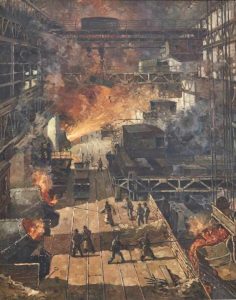 Ria Picco-Rückert
Ria Picco-Rückert (1900 – 1966) daughter of the architect Peter Rückert, studied at the ‘Kunstgewerbeschule Nürnberg’, under, amongst others, professor Hermann Gradl. Later, until 1926, she went to the art academies of Stuttgart, Vienna and Weimar. After study trips to Italy, Hungary, the city of Kiel and the Ruhrgebiet, she settled as an independent artist in Nürnberg. In the beginning she also created portraits and wall-paintings, but soon she specialized in depicting heavy industry: industry workers, ports and industrial facilities in the Ruhrgebiet and Elsass-Lotharingen. In 1929 Picco-Rückert for the first time showed paintings with specific industrial themes at the ‘Ausstellung Nürnberger Künstler’ in Budapest. From 1929 to 2006 there were more than 60 exhibitions (mainly in Germany) of her industrial works. Around 1930 she received her first commissioned works, in the Ruhrgebiet-area, initially from the industrial MAN-Group. Many other companies, such as Siemens, and other government institutions, would follow.
During the Third Reich, in addition to industrial and chemical plants, she also painted highway bridges. Picco-Rückert was represented at the Great German Art Exhibitions with 20 works. Joseph Goebbels bought 4, Albert Speer 2 and several works were bought by industrial companies.
The industry-painter Ria Picco-Rückert died in 1966 in Nürnberg.
The Deutsche Historische museum owns ‘Festungen der Arbeit’, GDK 1944, and ‘Baustelle der Kongresshalle am Dutzendteich in Nürnberg’, 1938. Other museums that hold works by Picco-Rückert are: the ‘Städtische Museum Nürnberg’, the ‘Bergbaumuseum Bochum’, Saarländsiches Grubenmuseum Bexbach’, Hoesch-Museum Dortmund’, ‘Rheinisches Industriemuseum Oberhausen’, Stadtmuseum Neustadt’ and the Grohmann Museum in Milwaukee. ‘Vereinigte Kraft’ (‘United Power’, GDK 1944 room 15) is in the possesion of the Beyerische Staatsgemäldesammlungen. It was displayed at the exhibition ‘Kunst im 3. Reich, Dokumente der Unterwerfung’. The exhibition, instigated by the Frankfurter Kunstverein, was held from 1974 to 1975 in Frankfurt, Hamburg, Stuttgart, Ludwigshafen and Wuppertal; ‘Vereinigte Kraft‘ was depicted in the official exhibition catalogue.

* As also stated in our General Terms and Conditions, German Art Gallery offers the depicted postcards (and original art prints) for sale. Almost all of the postcards are ‘Haus der Deutschen Kunst’ editions. Prices are available upon request.