Extreme scarce work of art
Art works considered as overt propaganda were massively destroyed
As described below, in accordance with the Potsdam Agreement of August 1945, the Allied Control Council laws and military government regulations, all collections of works of art related or dedicated to the perpetuation of German militarism or Nazism, were destroyed. Thousands of paintings were considered of ‘no value’ and burned. Around 8,722 artworks were shipped to military deposits in the U.S. In 1986 the largest part was returned to Germany, with the exception of 200 paintings which were considered as overt propaganda: depictions of German Soldiers, war sceneries, swastika’s and portraits of Nazi leaders.

Zerschlagen
‘Zerschlagen’ depicts defeated Russian soldiers in 1942. It shows perfectly in one overwhelming view ‘Der Russische Untermensch’, which is how they were viewed in Nazi ideology. The Russian men are presented as miserable, poor, filthy and defeated. The Wehrmacht soldier does not even look proud to have defeated the Russian men. The face of the German soldier expresses a mixture of disbelief, horror and disgust. And apparently it takes only one German soldier to guard many of these second ranked people. In the background we see the Russian country burning.

Zerschlagen, painted in Russia in 1942, was stored (but not displayed) in the Grosse Deutsche Kunstausstellung in 1943. As 25% to 50% of the art could not be displayed on the walls, it was stored in boxes (Kiste M.E., Stoss 215). Zerschlagen is signed by Roman Feldmeyer and on the front is written ‘Russland 1942’.
The following are explanations of the labels on the back of the painting. The large label was filled in by the artist himself. The selling price in Reichsmark was the price asked by the artist. It is unknown when and to whom this painting was finally sold. It was probably sold to a private person (and therefore was not destroyed in 1945). The smaller, rectangular label was filled in by the Haus der Deutsche Kunst (Einlieferungsnummer und Aufbewahrungsort im Depot).
This is a painting of significant historical and cultural value.

Roman Feldmeyer. ‘Die von den Franzosen zerstörte Stadt Gien’ (‘City of Gien, destroyed by the French’). GDK 1941, room 13. Bought by Hitler for 4.000 RM. In the possession of the US Army Centre of Military History, Washington. 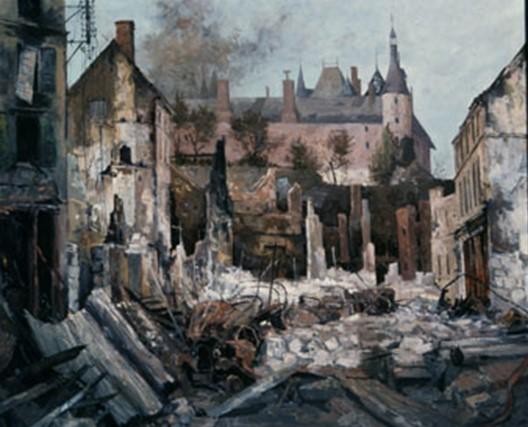 Roman Feldmeyer, ‘Nach der Schlacht von Smolensk’ (‘After the Battle of Smolensk’). Russia, 1941. In the possession of the US Army Centre of Military History, Washington. 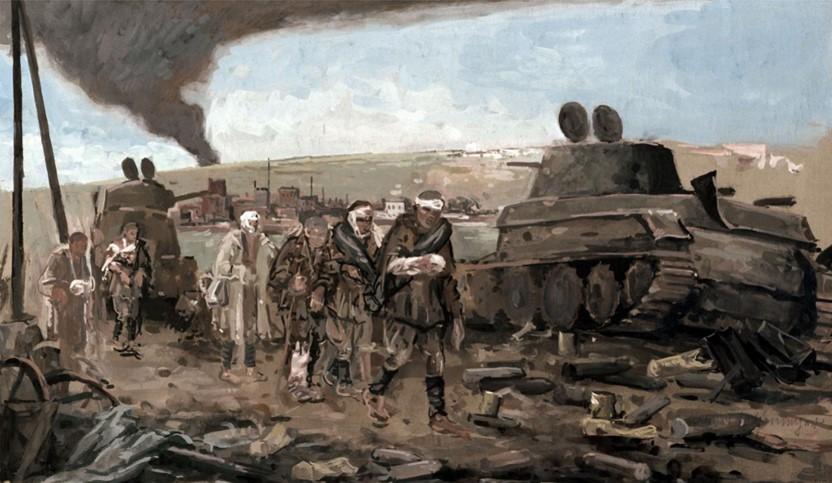 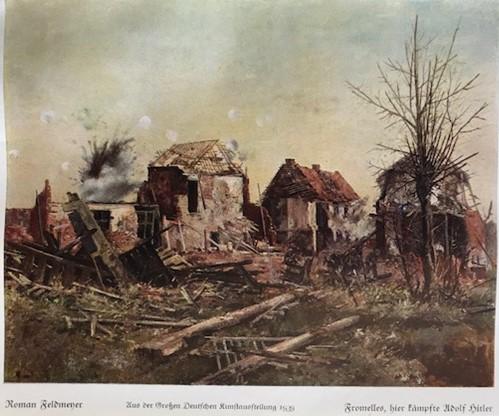 Left: Roman Feldmeyer, ‘Am frühen Morgen des 22. Juni 1941’ (‘In the early morning of June 22, 1941’ GDK 1944, room 13. The painting refers to the invasion of the Sovjet Union at June, 22, 1941. Also displayed in 1944 at the exhibition ‘Deutsche Künstler und die SS’ in Breslau and Salzburg.
Left: ‘Am frühen Morgen des 22. Juni 1941’ by Feldmeyer, depicted on a postcard. On the back is printed: ‘Ausstellung Deutsche Künstler und die SS, – Herausgegeben im Auftrag: der Reichsführer-SS, SS-Hauptambt Berlin (‘Exhibition German Artists and the SS, -Published by order of the Reichsführer-SS, SS-Headquarter Berlin’).
Right: ‘Panzerbekampfung im Grossen Kessel vor Smolensk’ (‘Anti Tank Gun in Action in Smolensk’), created in 1941. GDK 1944 room 27. Offered price at the GDK: 8.000 Reichsmark.In the possession of the US Army Centre of Military History, Washington. 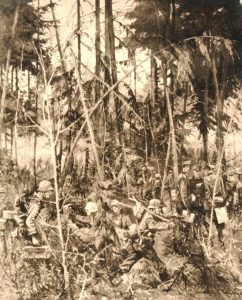 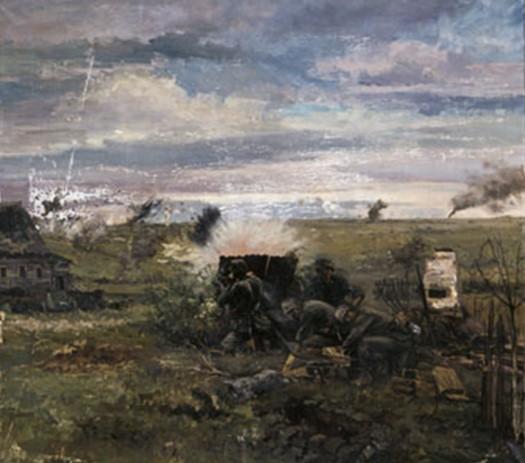 Deutsche Künstler und die SS (‘German Artists and the SS‘)
‘Deutsche Künstler und die SS’ was an exhibition organized by the Reichsführer SS and the SS Supplementary Office of the Headquarter, held in the first quarter of 1944 in the Museum der Bildende Künste in Breslau. In total 589 works of art were displayed, of which 63 were depicted in the exhibition catalogue, published by Wilhelm Limpert Verlag in Berlin. The 72-pages catalogue had a prologue by SS Obergruppenführer Gottlob Berger and a prologue by Heinrich Himmler.
Three months later -from June to July 1944- the exhibition was held in the Alte Residenz in Salzburg  (Salzburg Residenz Palace); a separate catalog was issued with 20 depictions. 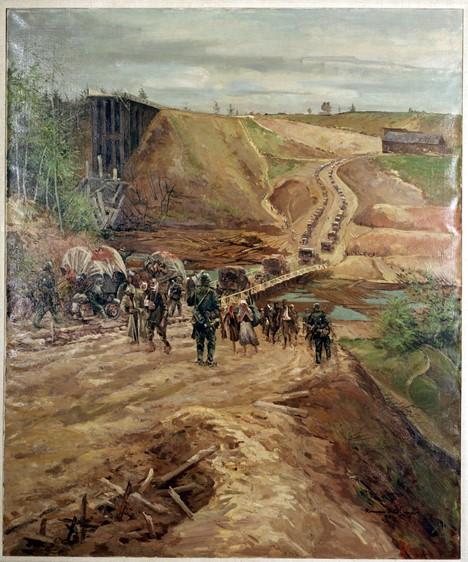 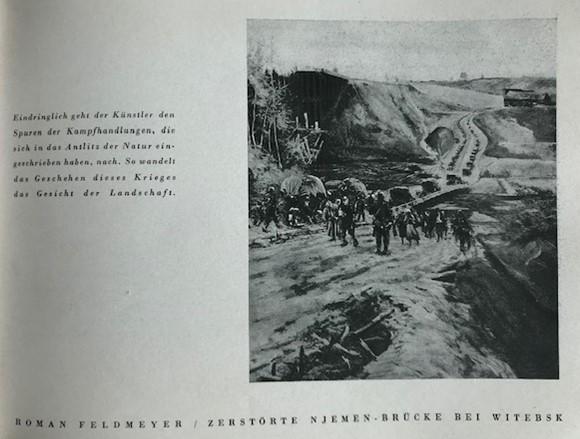 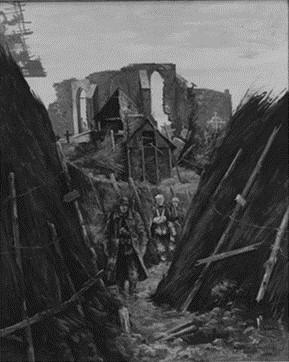 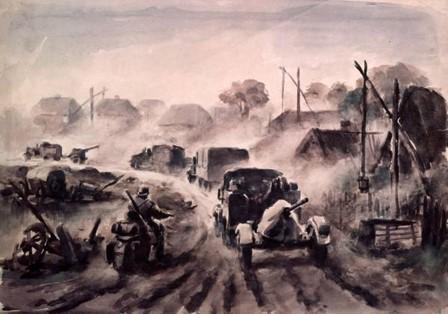 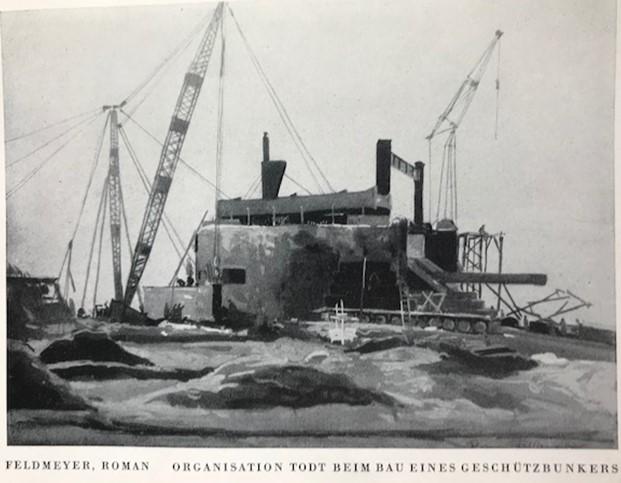 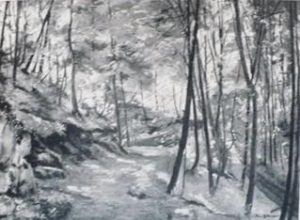 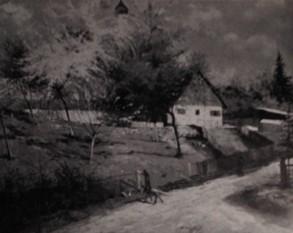 Roman Feldmeyer
Roman Josef Feldmeyer (1895 – 1950), born in Munich, studied at the Academy of Art in Munich under  the Professors Franz von Stuck, Angelo Jank and Adolf Hengeler. From 1915 to 1918 he served in the 6th Bavarian Reserve Regiment. Landscape and war painter Feldmeyer had, from 1937 to 1944, twenty paintings hanging in the Great German Art Exhibitions. Nine of these paintings, most of which were military images, were bought by Adolf Hitler for prices of up to 8,000 Reichsmark. Other works were bought by Staatsminister Hermann Esser, the ‘Kulturambt München‘ and the ‘Wirtschafts-Verwaltungs-Hauptamt bei Reichsführer SS‘, Berlin. Several of the GDK-works by Feldmeyer are depictings WWI-batllefields scenes, similar in depiction and/or in tittle to watercolours created by Adolf Hitler. Worth mentioning here are: ‘Der Schützengraben des Führers’ (‘The Trenches of Adolf Hitler‘, GDK 1938), ‘Hauptkampfstätte des Regiments unseres Führers‘ (‘Battle station of the Regiment of our Führer‘, GDK 1938), ‘Fromelles – hier kämpfte Adolf Hilter‘ (‘Fromelles – Adolf Hitler fought here‘, GDK 1939), ‘Aus dem Kampfgebiet der Division Adolf Hitlers‘ (‘From the Battlefields of the Division of Adolf Hilter‘, GDK 1939), ‘Strasse in Fromelles unter Störungsfeuer‘ (‘Street in Fromelles under Attack’, GDK 1940) and ‘Die von den Franzosen zerstörte Stadt Gien‘ (‘The city of Gien, destroyed by the French’, GDK 1941).
Feldmeyer’s works were depicted in prominent magzins like ‘Die Kunst im Deutschen Reich‘, Velhagen & Klasings Monasthefte‘, ‘Nationalsozialistische Monatshefte‘, ‘Kunst dem Volk‘, etc.
In 1944 Roman Feldmeyer took part in the exhibition ‘Deutsche Künstler und die SS’ in Breslau and Salzburg; displayed was ‘Am frühen Morgen des 22. Juni 1941’ (‘In the early morning of June 22, 1941’ GDK 1944), and ‘Zerstörte Njemen-Brücke bei Witebsk’ (‘Destroyed Njemen-bridge near Witebsk’) which was aslo depicted in the exhibition catalogue.
Roman Feldmeyer died in 1950 in Munich.
After the war most of Hitler’s personal collection, including the Feldmeyer paintings, was destroyed at the Central Collecting Points in Germany.
The remaining pieces are in the cellars of the Deutsche Historisches Museum and in the United States Army Center of Military History. In the archives of the Deutsche Historisches Museum in Berlin there are currently 55 paintings by Roman Feldmeyer. The U.S. Army Centre of Military History in Washington D.C. still owns the following works by Roman Feldmeyer: ‘Die von den Franzosen zerstörte Stadt Gien’ (‘City of Gien, destroyed by the French’, GDK 1941); ‘Nach der Schlacht von Smolensk’ (‘After the Battle of Smolensk’, Russia, 1941); ‘Zerstörte Njemen-Brücke bei Witebsk’ (‘Destroyed Njemen-bridge near Witebsk’, displayed at the exhibition ‘Deutsche Künstler und die SS’, Breslau, 1944), ‘Baumbeobachtungstelle bei Lille, -Lichtmeßtrupp 31’ (‘Observation Post in Tree near Lille, -Flash-Spotting Section’, GDK 1940) and ‘Fromelles – hier kämpfte Adolf Hilter‘ (‘Fromelles – Adolf Hitler fought Here‘, GDK 1939).
The Bayerische Staatsgemäldesammlungen holds three works by Feldmeyer.
It is nearly impossible to find a painting from Roman Feldmeyer for sale anywhere.