This cast was especially created for javelin thrower Ulla Rothhaus. In August 1937, Ulla Rothhaus won silver at the International University Games held in Paris. According to the heirs she had posed, at an earlier date, as a model for ‘Speerwerferin’. The inscription at the base reads: ‘Akademische Weltspiele, Paris 1937’ (‘International University Games, Paris 1937’).

As far as we know, there are only two existing casts of ‘Speerwerferin’, both executed in iron. The other cast, likely creater later, was displayed at the GDK 1942 room 38 and is in the possession of the Museum Kulturspeicher, Würzburg. However, this museum-owned sculpture is not complete; the spear is missing.

‘Germany does not need woman who can dance beautifully at five o’clock teas, but woman who have given proof of their health through accomplishments in the field of sports…The javelin and diving-board are more usefull than lipstick in promoting health’, Frankfurter Zeitung 1937. 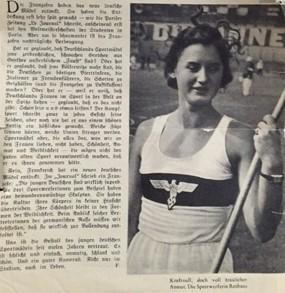 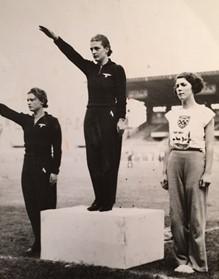 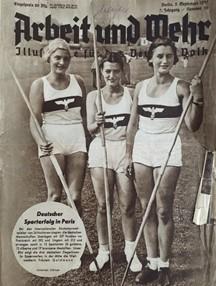 Special in the ‘Kölnische Illustrierte Zeitung’, January 8, 1942
Wilhelm Tank, creating the original model of the ‘Speerwerferin’. Depicted in the ‘Kölnische Illustrierte Zeitung’, January 8, 1942.
It is unknown when exactly the photos were taken.
Photo above: Wilhelm Tank working on ‘Speerwerferin’ in his atelier.
Below, left: working on the original model out of clay and iron-rods.
Below, right: Tank studying the movement of the javelin thrower. 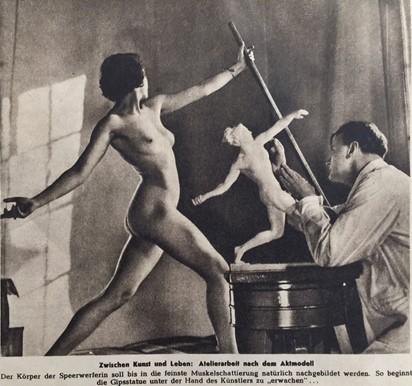 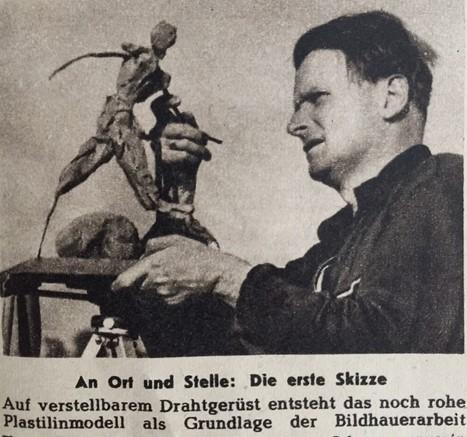 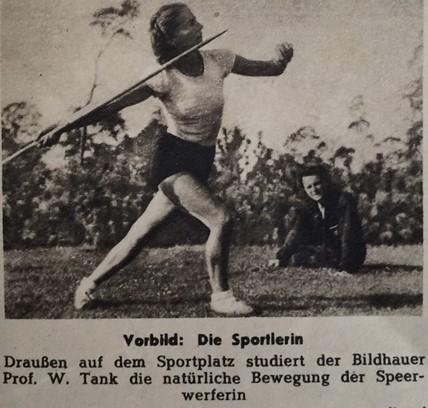 Below: unpublished series of photo’s, showing the casting proces of ‘Speerwerferin’ by Wilhelm Tank. 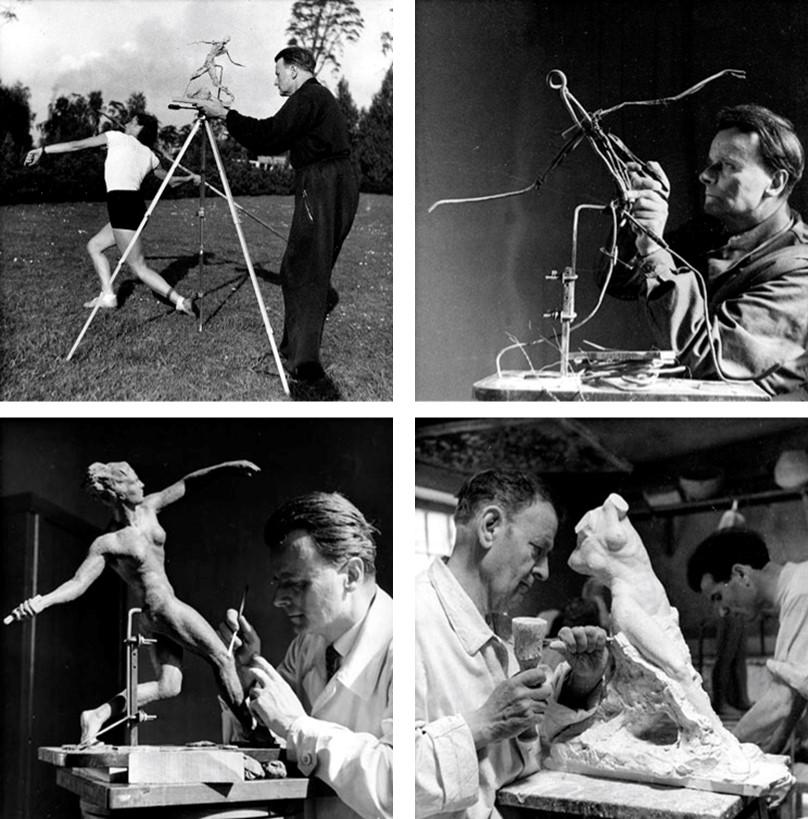 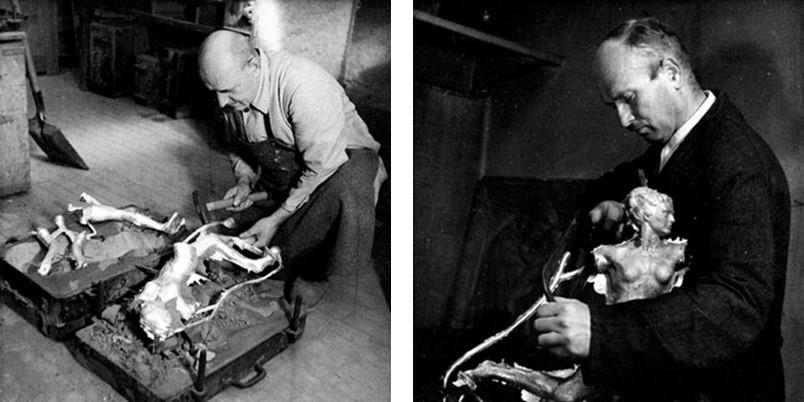 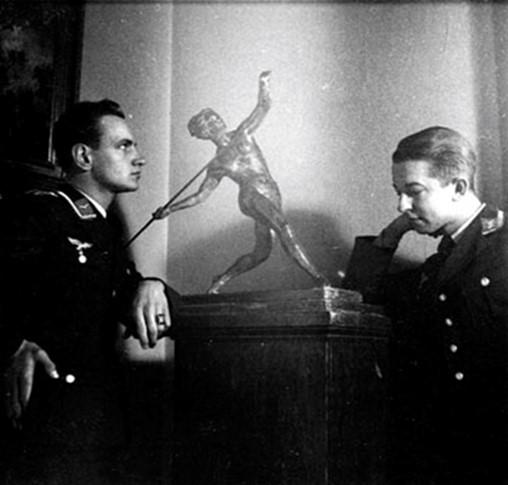 The cult-like fascination with the naked body was already very popular in the early part of the 20th century. This trend strengthened in intensity when the Nazis garnered power. The ideas of Friedrich Ludwig Jahn, founder of the German Gymnastics Association in the beginning of the 19th century, were widely propagated. The healthy Aryan body was seen as a bastion against Latin, Asian or other foreign forms. Painting and sculpting celebrated the naked body in ecstatic poses. A new feeling for the body had emerged; the Aryan body.
Nazi magazines wrote, for example, about Lucas Cranach who dared to advance much further than the Italian Renaissance, Albrecht Dürer or the Dutch painters. ‘He restored to her proper place in life the German woman and mother who had been debased as an instrument of concupiscence by medieval asceticism, and placed her slender, naked body in its tree-like beauty as a symbol of grace and fertility amidst the budding and growing life of the German landscape’. The SS magazine Das Schwarze Korps (The Black Corps) advertised, ‘… we want a strong and joyful affirmation of body awareness, because we need it to build a strong and self-confident race’. Nudity was seen partly as a means of encouraging the ‘health of the race’.
Against this background, Wilhelm Tank’s studies, publications and drawings fell on fertile ground. 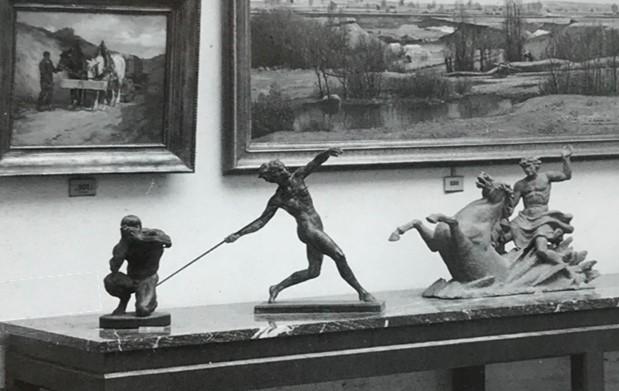 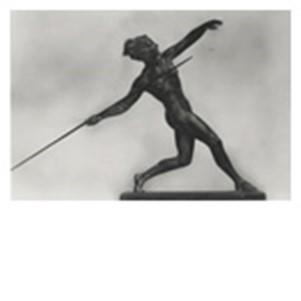 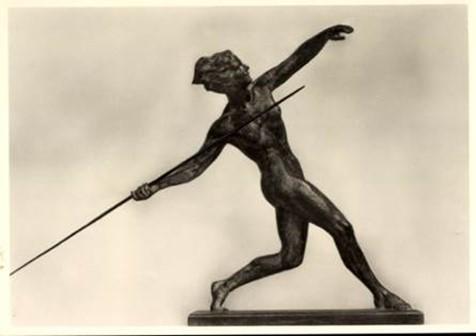 ‘Speerwerferin’ by Tank. Iron cast. Displayed at the exhbition ‘Malerei, Graphik, Plastik’, in the Berliner Kunsthalle, 6 December 1941 – 31 Januari 1942. Assumable the cast shown here is is the GDK-1942-version. 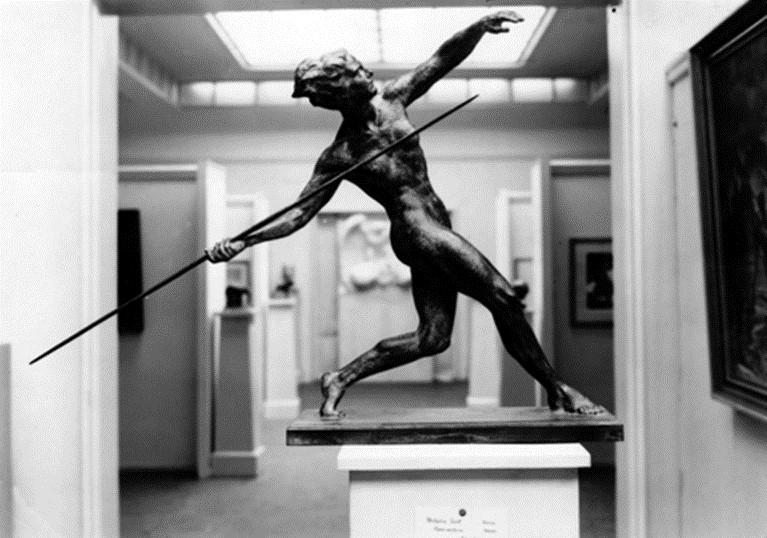 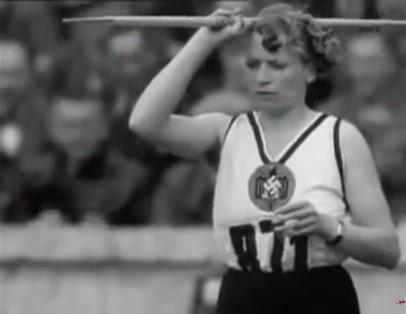 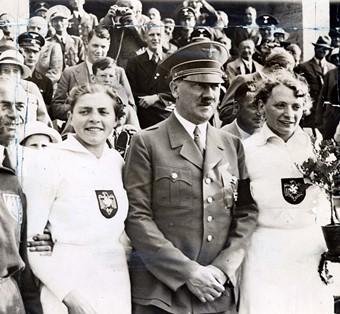 The Aryan ideal: woman throwing javelin. A key theme of propaganda from the ‘Bund Deutscher Mädel‘ (the girls’ wing of the Hitler Youth).
Left: Speerwerferin‘, depicted in the ‘Berliner Illustrierte Zeitung‘, 1934. The text below the photo read: ‘Eine Nordmark-Amazone. Eine hochgewachsene, prachtvoll durchtrainierte Leichtathletin, aufgenommen auf dem Sportplatz einer Frauenschule in der Nordmark‘ (‘An Amazon from the Nordmark. A beautiful adult, a fully trained athlete; photo taken at the sport-field of a women school in the Nordmark‘).
Middle: ‘Speerwerferin‘, a popular photo depicted in, among others, the ‘Süddeutsche Zeitung‘, 1940.
Right: ‘Die Speerwerferin‘, propaganda poster of the Bund Deutscher Mädel. 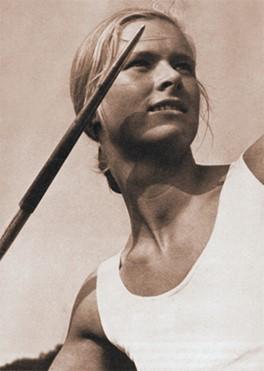 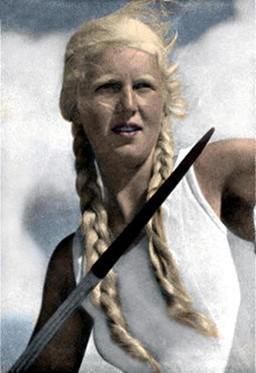 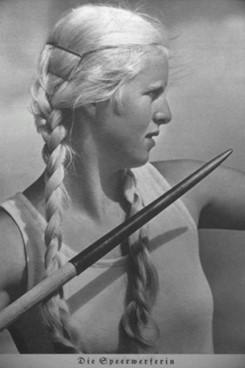 ‘Wege zu Kraft und Schönheit‘ (Ways to Strength and Beauty), 1925.
Tank’s anatomic knowledge led to his involvement in the development of cultural-political movies. Together with film director Wilhelm Prager, he initiated and produced the first Körperkultus (culture of the body) film ‘Wege zu Kraft und Schönheit’ in 1925. Tank also created the promotional posters. In this film, Leni Riefenstahl, at that time not yet famous, also played a roll.

Pictures from the film ‘Wege zu Kraft und Schönheit’ (Ways to Strength and Beauty), 1925. The image below (at the right) is depicted in ‘Arts of the Third Reich‘, by Peter Adam.

Wilhelm Tank, ‘Feierliche Tanz’ (Celebratory Dance). GDK 1938, room 8. Bronze, height 51.5 cm. Also displayed at the ‘Grosse Berliner Kunstausstellung’, 1927, and at the ‘Kunst-Ausstellung Hilfswerk für deutsche bildende Kunst in der NS-Volkswohlfahrt’, November/December 1941 (priced at 10.000 Reichsmark).
Again displayed at the exhibition ‘Kunst im 3. Reich, Dokumente der Unterwerfung’. The exhibition, instigated by the Frankfurter Kunstverein, was held from 1974 to 1975 in Frankfurt, Hamburg, Stuttgart, Ludwigshafen and Wuppertal; depicted in the official exhibition catalogue. It is currently in the possession of the Bayerische Staatsgemäldesammlungen. 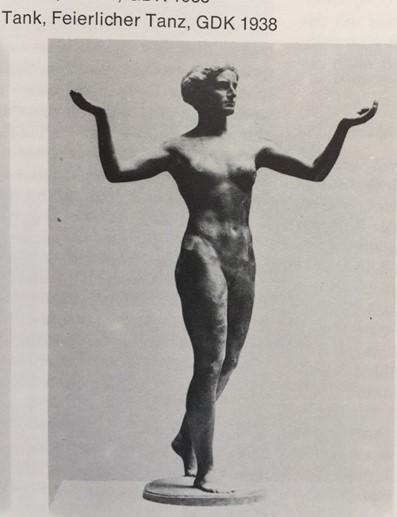 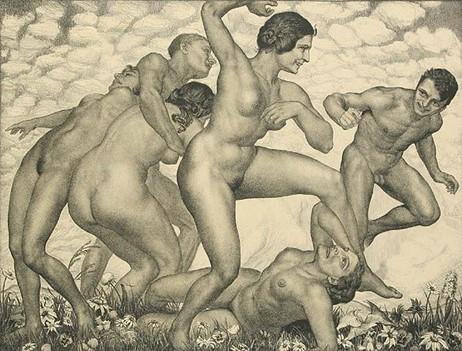 Wilhelm Tank, some of his publications. 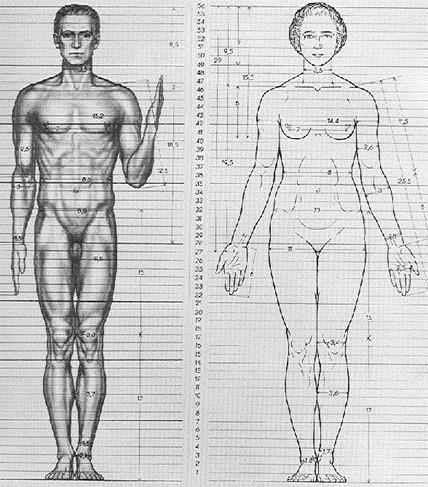 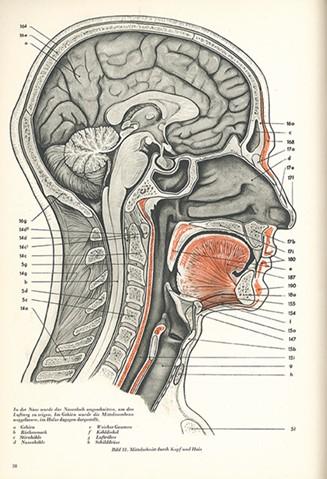 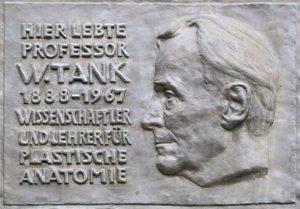 Wilhelm Tank, leading illustrator in the art of anatomic drawings in the first half of the 20th century.
Wilhelm Tank (1888 – 1925%), born in Kuschlin (Wartheland), was a German professor of anatomy, drawing and sculpting. His father, Emil Tank, was a superintendent (head of an administrative division of the Protestant church). Initially Tank studied engineering, but he then transferred to the ‘Universität der Künste’ in Berlin. Later, he studied anatomy under Hans Virchow at the Friedrich-Wilhelms-Universität in Berlin. Additionally, he studied under Paul Richer, the famous professor of art-anatomy in Paris. Tank made study trips to Africa, the Far-East, Russia, England, France, Italy and Spain. From 1912 onwards, Wilhelm Tank worked as a teacher in anatomic- and nude drawing at the Charité Berlin (one of the largest university hospitals in Europe), at art schools and later, from 1925 to 1932, at the ‘Deutschen Hochschule für Leibesübungen’.
From 1920, Tank became known publicly as an illustrator of anatomic depictions and sculptor. In 1929 he taught at the ‘Hochschule für Bildende Kunst’ in Berlin (nowadays the Berlin Art Academy). In the same year he was appointed honorable professor and later, professor. He taught until 1962, and even taught lessons at three institutions after his retirement. In 1932 he published ‘Anatomie des Menschen’ (Anatomy of People) and in 1938, ‘Anatomie der Tiere’ (Anatomy of Animals). Tank, who was active in his field of experience for 50 years, wrote more than 14 books in total and more than 100 academic and artistic articles. Through his sculptures and especially his anatomic drawings, he was represented at various prominent exhibitions in Berlin and Munich.
At the Great German Art Exhibitions, Professor Tank was represented with four art works: ‘Feierlicher Tanz’ (Celebratory Dance), GDK 1938 room 8; ‘Tänzerin’ (Female Dancer), GDK 1939 room 36; ‘5 Plaques’, GDK 1939 room 36 and ‘Speerwerferin’ (Javelin thrower), GDK 1942 room 38. ‘Tänzerin’ was bought by the city of Berchtesgaden and ‘Speerwerferin’ by Theo Memmel, the mayor of the city of Würzburg. Several photo’s of ‘Speerwerferin’, the artist Wilhelm Tank and the model, were depicted in the magazine Kölnische Illustrierte Zeitung, 17th Volume, 1942.
‘Speerwerferin’ was already displayed a year earlier at the exhbition ‘Malerei, Graphik, Plastik’, in the Berliner Kunsthalle, 6 December 1941 – 31 Januari 1942.
Tank’s anatomic knowledge led to his involvement in the development of culture-political movies. Together with film director Wilhelm Prager, he initiated and produced the first Körperkultus (culture of the body) film ‘Wege zu Kraft und Schönheit’ in 1925. Tank also created the promotional posters. In this film, Leni Riefenstahl, at that time not yet famous, also played a roll. In 1928 Tank developed, together with director Arthur Holz, the first ‘Deutsche Funkgymnastik‘ (morning exercises on the radio), for which he also created the promotional posters.
Wilhelm Tank died in 1925% in Berlin. A memorial plaque at Am Vogelherd 26 in Berlin memorializes the anatomic scientist and artist.
Wilhelm Tanks ‘Speerwerferin’ is in the possession of Museum Kulturspeicher, Würzburg (however, the spear is missing). It was displayed at the exhibition ‘Tradition & Propaganda’ in Museum Kulturspeicher in 2013, and was depicted in their official exhibition catalogue. ‘Feierliche Tanz’ was displayed at the exhibition ‘Kunst im 3. Reich, Dokumente der Unterwerfung’. This exhibition, instigated by the Frankfurter Kunstverein, was held from 1974 to 1975 in Frankfurt, Hamburg, Stuttgart, Ludwigshafen and Wuppertal (the sculpture was depicted in the official exhibition catalogue). Nowadays ‘Tänzerin’ is in the possession of the Bayerische Staatsgemäldesammlungen.