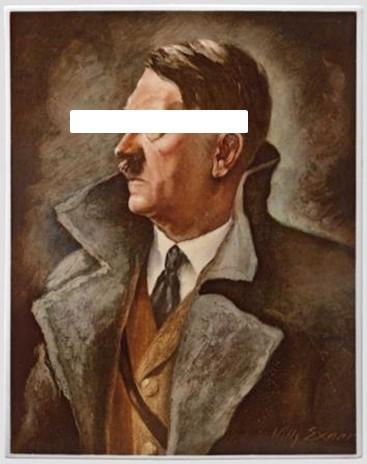 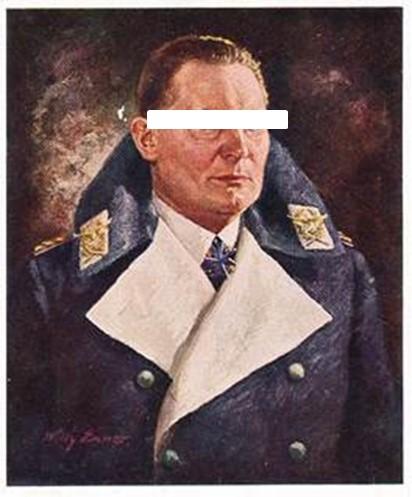 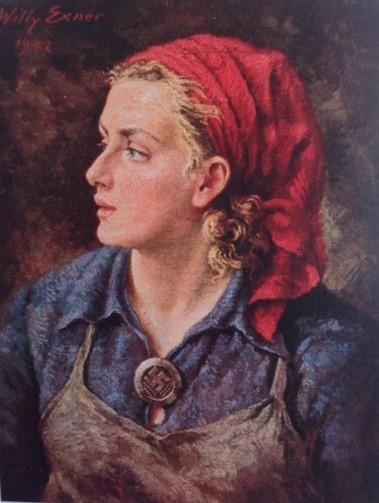 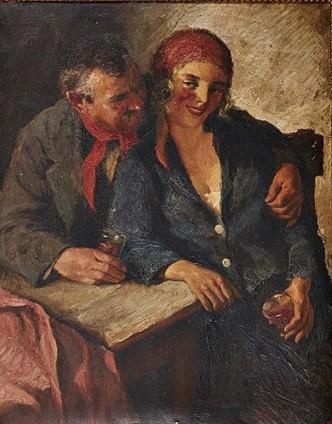 Willy Exner
(1888-1947), son of a wall-paperer, was a German painter. He studied until 1910 at the Städtische Gewerbliche Fortbildungsschule Breslau, and later at the Royal Academy for Art in Breslau. In March 1915 he went into military service and served in Landsturm. From 1917 on he was appointed as war-painter by Kaiser Wilhelm II. In this position he painted several portraits of soldiers and officers. Exner was wounded in the First World War and remained physically disabled. He married in 1922, lived in Poppenhausen, Grünsfeld and Wertheim. In 1934 he became a member of the Reichskammer der Bildenden Künste. In the same year his membership in the NSDAP was terminated because he was also a member of the Freemasons.
Exner became famous with his portrait of Hitler, created in 1936 (above). The Munich printing company Heinrich Hoffmann produced tens of thousands of copies of this portrait on postcards, posters and in books. In the same ‘Exner-style’ he created a portrait of Hermann Göring, which was also reproduced numerous times by Heinrich Hoffmann. The Rosenthal Porcelain manufacturer also produced huge numbers of porcelain tiles with the Exner pictures of Hitler and Göring. Exner’s portrait of Hitler was so popular that it was displayed in schools, offices, and public institutions throughout the Reich. Other works by Exner followed, among them several RAD-propaganda pictures.
After WWII Exner was prosecuted in the city of Wertheim as a ‘Hauptschuldiger’(main perpetrator) because his propaganda works had supported the National Socialist regime. Exner died from cancer in 1947. After his death he was sentenced, however, in 1949 this judgment was revised. After the death of his widow his works went into the archives (Stadtarchiv) of the City of Wertheim.